Direct formic acid fuel cells, DFAFCs, can generate higher power density than the other direct liquid fuel cells, such as direct methanol fuel cell, direct ethanol fuel cell, and so on. Therefore, we expected that the DFAFCs can be substituted for the polymer electrolyte fuel cell, PEFCs, due to easy handling of liquid fuel. In order to substitute DFAFC for PEFC, the improvement for the power density must be required since the current power density of DFAFC is about half or a forth to that of the PEFCs. The high power density of DFAFC has been reported at 25-30 °C, on the other hand, it has also reported that power density of the DFAFCs did not increase with increasing operation temperature above 50 °C [1]. It is considered that this is related to the mass transfer in the anode electrode. Therefore, in this study, the catalyst layer of the anode was fabricated by the ultrasonic spray method to fabricate thin catalyst layer which can reduce the mass transfer resistance. The power density and the electrode potentials of the DFAFC fabricated by ultrasonic spray were compared to that fabricated by the conventional method.

The membrane electrode assembly, MEA, with a 4.84 cm2 active area was prepared. 1.0±0.1 mg/cm2 of ketjen black as micro porous layer, MPL, was coated on the carbon paper for the anode electrode. 2 mg/cm2 of the Pd-black was sprayed on the polymer electrolyte membrane by ultrasonic spray for the anode catalyst layer. For the comparisons, the anode electrode, which was fabricated by depositing the Pd on to the carbon paper coated with MPL, was also prepared. For the cathode electrode, 2 mg/cm2of the Pt/C was coated on the carbon paper. 10 wt% of ionomer was contained in the catalyst layer in both electrodes. NR 212 was used as an electrolyte membrane. The MEA was fabricated by sandwiching the membrane between the anode and the cathode electrodes and hot pressing them at 413 K and 5 MPa for 3 min.

Figure 1 shows the schematic diagram of the active cell with reference electrode. Using reference electrode, the electrode potentials of the anode and cathode versus reference electrode were individually measured. Current-voltage, i-v, characteristics were measured using different MEA. 5 M formic acid solution and 0.5 L/min of oxygen were supplied to cell. The cell temperature was 80 °C. 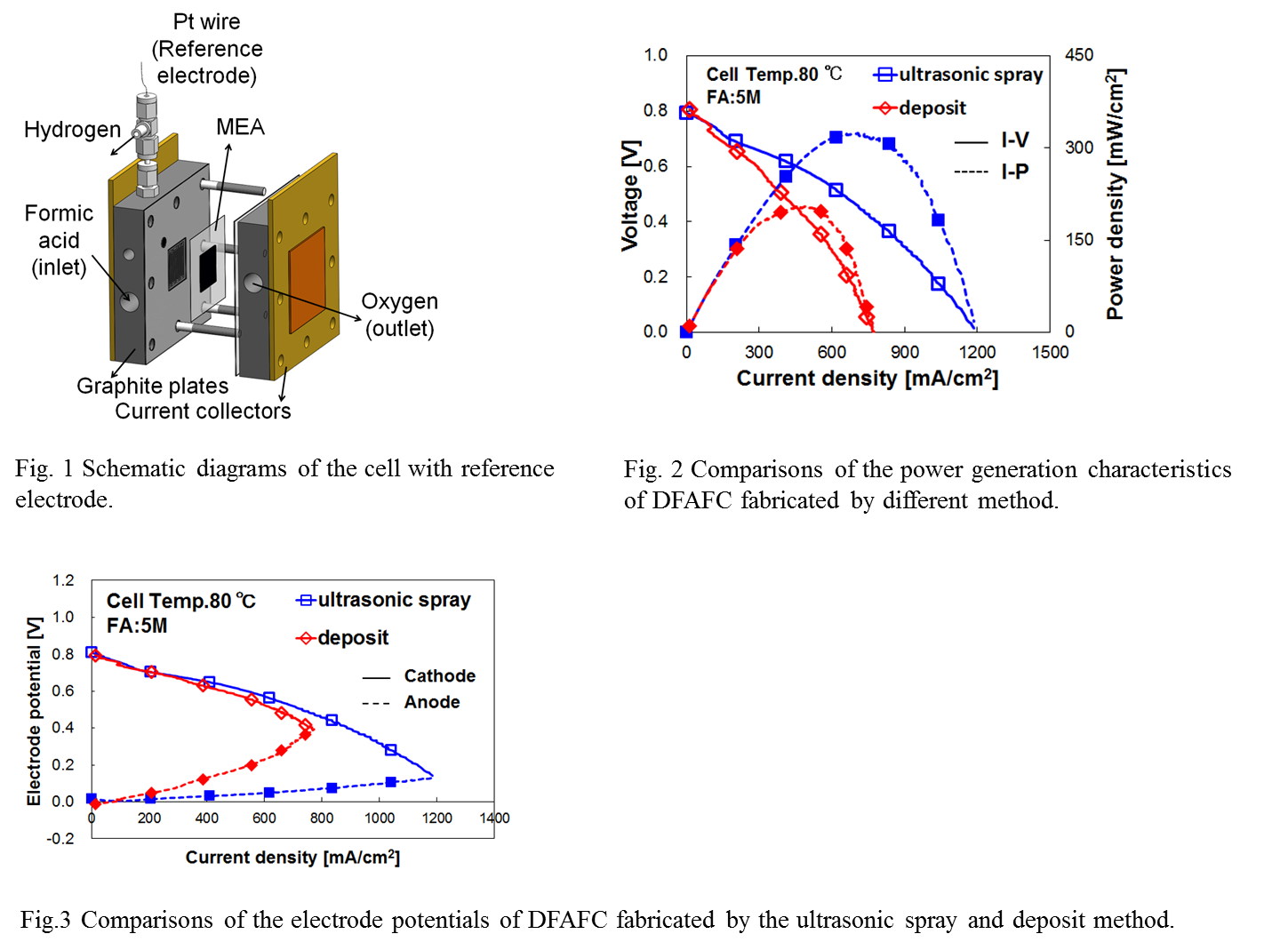