105-B (Phoenix Convention Center)
J. S. Park, I. H. Kim, G. S. Lee, T. H. Shim (Hanyang University), and J. G. Park (Hanyang University)
According to International Technology Roadmap for Semiconductor (ITRS), the development of MOSFETs based on SiGe or Ge is necessary for the next generation technology beyond 10-nm C-MOSFETs, because electron and hole mobility of Ge substrate is three and four times higher than those of a conventional Si MOSFETs, respectively. However, due to the lattice mismatch of 4.2 % between Si and Ge, many threading dislocations are generated, resulted in increasing the leakage current of the C-MOSFETs. The threading dislocation density of graded SiGe layer utilized currently is higher than 105 cm-2, which is too high to be applied in mass production because of degrading productivity and performance of the C-MOSFETs. To overcome this drawback in realizing sub 10-nm C-MOSFETs, a novel process technology should be developed to reduce the threading dislocation density.

Therefore, we present the mechanism of the strain relaxation resulted in the formation of the threading dislocation in Si1-xGex/Si (100) substrate. In addition, we explain how H+ implantation affects the cross-hatch pattern density related the threading dislocation. Furthermore, we report the process technology and optimized the implanted energy, dose, and the position of dislocation sink in Si1-xGex/Si structure via ion implantation.

* This work was financially supported by the Brain Korea 21 Plus Program in 2015 and SiWEDS (Silicon Wafer Engineering and Defect Science). 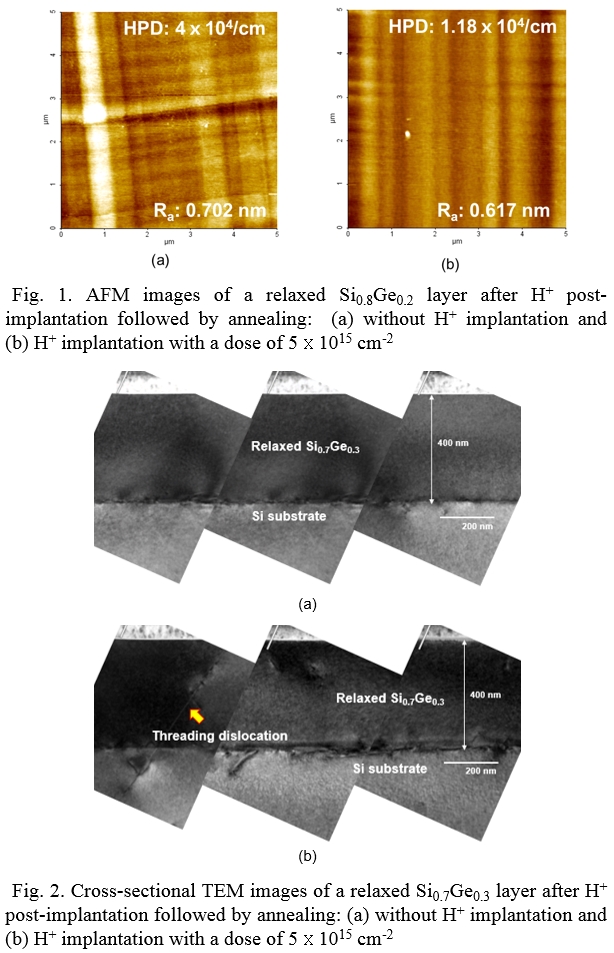