West Hall 1 (Phoenix Convention Center)
K. Murakami (Tokyo Institute of Technology), K. Yamada, A. Fave (Institut des Nanotechnologies de Lyon (INSA-Lyon)), and M. Ihara (Tokyo Institute of Technology)
[Introduction]A multi-junction solar cell can generate high open current voltage by each layer absorbing a different wavelength light, although lattice mismatch between materials is one of its problems. A possible new type of solar cell is an all-Si tandem solar cell, which will have no mismatch. Our laboratory noticed that porous silicon is a light-absorbing material for short wavelengths. Its nano-scale holes on its surface increases its band gap due to the quantum size effect. Because this porous structure, however, leads to high resistivity and low absorption coefficient, the porous layer must be made thinner by enhancing light absorption.

To improve light absorption, we propose using localized surface plasmon of metal nanoparticles [1, 2]. By such introduction of these particles into the holes of porous silicon, a thinner porous layer can be also achieved.

2. Fabrication of solar cells: An n-type silicon layer was deposited on top of the porous silicon by chemical vapor deposition (CVD) using SiH4 and PH3 in H2. Silver electrodes were fabricated using RF sputtering, and then their rectification property and quantum efficiency were measured.

3. FDTD simulation: With the Finite-Different-Time-Domain (FDTD) method, we created a simulation model in which silver nanoparticles exist in the holes on the silicon surface. The simulation showed how the light absorption in this combined material is enhanced by adding silver nanoparticles to the porous silicon. Then, the necessary layer thickness of porous layer was estimated by the model, and the influence of localized surface plasmon was verified by investigating the strength of the electrical field near the interface between the silicon and silver nanoparticles.

[Results and Discussion] 1.Structure control of porous silicon: By changing the anodization time and current density, we successfully fabricated porous silicon of various pore size, depth, and porosity. Figure 1 shows the relationship between current density I and pore diameter. In addition, results reveal that dry etching expands the pore size of a porous silicon surface (Fig. 2), indicating that dry etching might facilitate both the introduction of metal nanoparticles and the control of band gaps.

[Conclusion] Current density, resistivity of wafers, and dry etching can be factors in controlling the structure of porous silicon. We successfully formed p-n junctions with porous silicon, and based on the measured I-Vcharacteristics and quantum efficiency of porous silicon solar cells, the porous silicon needs to be thinner and needs passivation. The simulations suggest that metal nanoparticles enhance the light absorption. 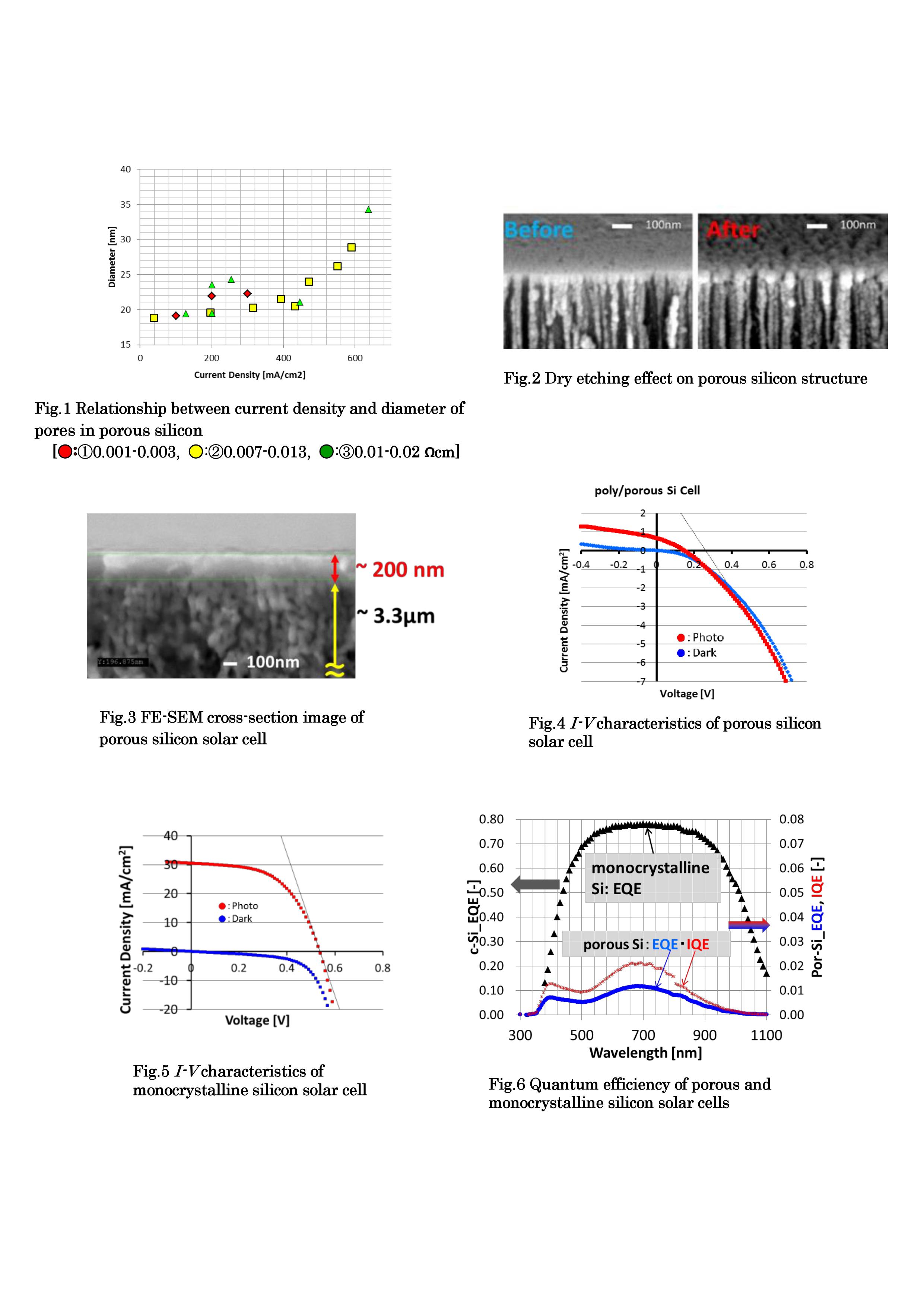