Ellis West (Hyatt Regency)
J. S. Park, J. H. Shim, Y. H. Ko, J. H. Park, G. S. Lee (Hanyang University), and J. G. Park (Hanyang University)
For the past few decades, flexible or bendable silicon, dye-sensitized, organic, and hybrid solar-cells have been intensively researched to improve power-conversion-efficiency (PCE) and to minimize the fabrication cost because of their attractive applications such as building-integrated photovoltaic (BIPV), and portable electronics power. Although flexible or bendable dye-sensitized, organic, and hybrid solar-cells have demonstrated a relevant PCE and solar-cell fabrication cost for a real photovoltaic application, their PCE and solar-cell fabrication cost was still quite higher than that of solid silicon solar-cells. Recently, S. Jeong et al. reported ultra-thin silicon (~10-um in thickness) solar-cell showing a maximum PCE of 13.7 %. However, it was fabricated with typical high-cost semiconductor processes such as SOI wafer, photolithograph, and deep reactive-ion etching (RIE). In addition, it could not demonstrate flexible or bendable solar-cell characteristics.

It was observed that flexible ultra-thin (~30-um in thickness) silicon solar-cells implemented with energy-down-shift layer showed stable flexible and twistable characteristics as shown in Fig. 1. In addition, Fig. 2 presents the EQE as function of wavelength and current density vs. voltage characteristics. It was confirmed that the Cd0.5Zn0.5S/ZnS core/shell QDs on the flexible ultra-thin solar-cells enhanced the EQE of about 17 %P at the UV light region (300 – 400 nm) as shown in Fig. 2(a). In particular, the QDs enhanced the PCE   to 0.77%P by the energy-down-shift effect that enhanced the EQE, which resulting in that the PCE of the ultra-thin silicon solar-cells was about 12.37 %.

In the conference, we will present in detail physical, optical electrical, and flexible properties of flexible ultra-thin silicon solar-cells implemented with energy-down-shift layer. In particular, we will report how their PCE can be sustained after the bending cycles of 5,000.

* This work was financially supported by the Brain Korea 21 Plus Program in 2015. 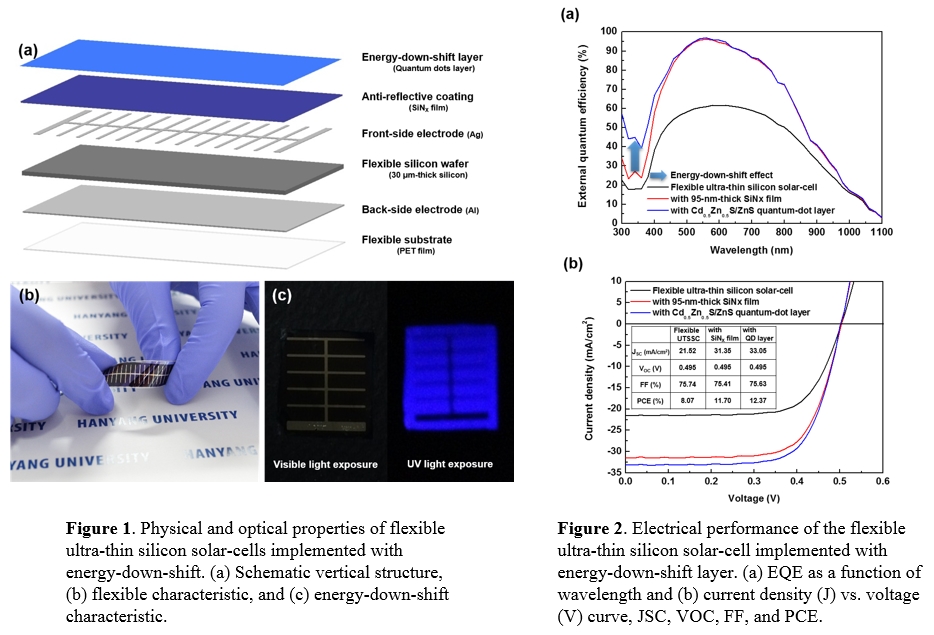