106-C (Phoenix Convention Center)
S. Lee, D. Kwon, C. Yim (Department of Chemical Engineering, POSTECH), and S. Jeon (Department of Chemical Engineering, POSTECH)
A facile method was developed for the detection of Troponin I (TnI) using dendritic platinum nanoparticles and capillary tube indicators. Dendritic platinum nanoparticles were functionalized with TnI antibodies, which were used to capture TnI in human serum. The captured TnI was conjugated to the inner surface of a glass vial, to which a hydrogen peroxide (H2O2) solution was added. After sealing the glass vial with a screw cap containing a silicon septum, a capillary tube containing a drop of ink was inserted through the septum. The catalytic dissociation of H2O2 to water and oxygen increased the pressure inside the glass vial and raised the ink level in the capillary tube. The ink level increased with the platinum nanoparticle concentration, which is proportional to the TnI concentration. The sensitivity of this assay for TnI in human serum after a 5-min dissociation reaction, detected with the naked eye, was 0.1 ng/mL, which was better than the sensitivity of the conventional colorimetric method using the TMB oxidation reaction under the same experimental conditions. A control experiment using alpha-fetoprotein, interleukin-5, and C-reactive protein revealed that the developed method was highly selective for the detection of TnI. 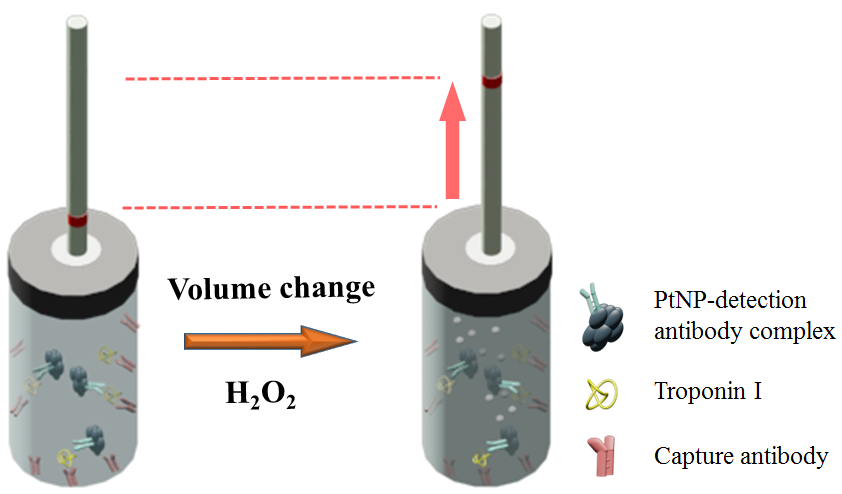