Lead acid battery has been widely used for more than 100 years and still now, it is very important for vehicles. Despite of its long history of study, some chemical reactions in a cell have not been clarified yet. PbO2 of cathode material has two types of crystal structures, i.e. α-PbO2 and β-PbO2. It is reported that PbO2 exists as β-PbO2 in an acidic region and as α-PbO2 in an alkaline region[1]. However, α-PbO2 also coexists with β-PbO2 in the cathode, the reason of which is not yet revealed well. In Pavlov's model[2], the mechanism of α-PbO2 formation on the cathode is explained that, at first, lead sulfate forms by the reaction between the cathode active material and the sulfuric acid to cover the surface of the cathode, and that, consequently, pH is increased to form lead oxide at the interface between lead sulfate and the current collector (CC), and that, finally, lead oxide is oxidized to α-PbO2 by the oxygen in sulfuric acid at the charge process of the battery.

In the previous study[3,4], we have revealed that α-PbO2 forms in the open circuit[5] at the interface between β-PbO2 and CC. Although the cell was discharged deeply, the formation of α-PbO2 by the local cell reaction was observed during the rest. In this study, we employed three kinds of CC, lead, gold and gold sputtered lead, and observed the difference of α-PbO2 formation after cycle tests. The formation mechanism of α-PbO2 was discussed from the viewpoint of the local cell reaction.

We crushed β-PbO2 (A Johnson Matthey Co.) mechanically in the mortar for 1day. We fabricated the cathode by mixing powder of the crushed PbO2 as the active material, acetylene black as a conducting additive and PTFE as a binder at the ratio of 80:15:5 percent by weight. We used lead plate as counter electrode and 30wt% sulfuric acid as the electrolyte, respectively. We employed lead plate or gold sputtered lead plate, written as gold-sputtered hereafter, as CC. For gold-sputtered, only one surface where the cathode material contacts was sputtered by gold. Consequently, it is considered that the effect of CC on the pH of electrolyte is the same for either lead plate or gold-sputtered.

At first, we discharged the cell for 30min at 9mA/g and charged for 20 min at 180mA/g for 20 cycles to make the cell reaction stable. Then we discharged the cell to the cutoff voltage of 0V at 9mA/g, thereafter we opened the circuit. After the rest for 1 day, we measured X-ray diffraction of the cathode using RINT-TTR (Rigaku Co., CuKα, 200mA, 30kV) for each cathode. We also conducted SEM observation for each cathode.

Fig.1 shows XRD patterns of cathode after the charge-discharge cycles. (A) and (B) correspond to the results using lead and gold-sputtered CCs, respectively. For the cathode using lead CC, a peak of α-PbO2 appeared around 28°in 2θ as depicted by arrow in (A), while it doesn’t appear for gold-sputtered CC in (B). Fig.2 shows SEM images of the surface of the cathodes using (A) lead CC and (B) gold-sputtered. For both cathodes, it can be seen that lead sulfate particles with the size of 1～4 micrometers cover on the electrode surface. 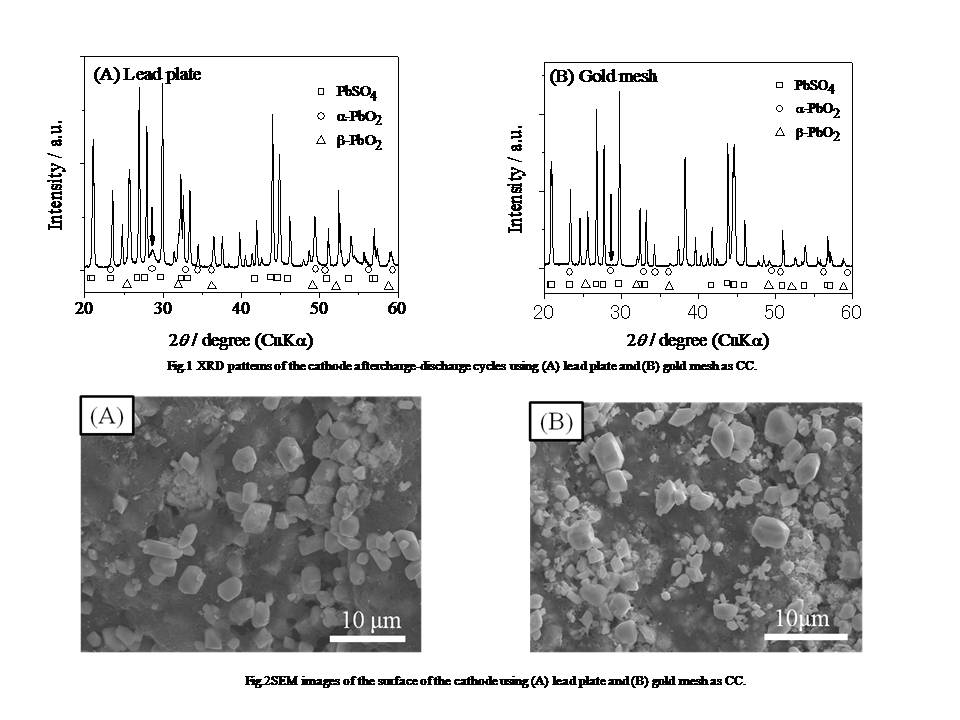