West Hall 1 (Phoenix Convention Center)
N. Yamada, H. Atsushiba, S. Sakamoto, N. Fukumuro (University of Hyogo), and S. Yae (University of Hyogo)
Surface metallization of silicon (Si) substrates, that is, adhesive metal films formation on Si is important for obtaining infallible electrical contacts in various devices such as solar cells and power devices. Autocatalytic electroless deposition, which is a conventional method to metallize non-conductive substrates, has several advantages like simplicity of process, uniformity of deposited films, and the covering of complicated structures. The autocatalytic electroless deposition is expected to replace sputtering process of back metal of power devices and screen printing process of electrodes of solar cells. This process requires surface-activation pretreatment of non-conductive substrates (1). Adhesion of metal films obtained by using conventional pretreatments is much lower than that is necessary for the electrical contacts. We recently developed a new surface-activation process for the direct electroless deposition of adhesive metal films on Si substrates (2, 3). The process consists of two steps: Step 1) formation of gold (Au) nanoparticles by electroless displacement deposition; and Step 2) metal films formation on the Si surface by autocatalytic electroless deposition. In previous study, we found that Au nanoparticles have an excellent ability to bind metal films to Si surfaces. In this study, we have investigated the effect of interfacial structure of Au and Si.

At the first step of the two-step process, Au nanoparticles were deposited on a p-Si(100) substrate by electroless displacement deposition using a HAuCl4 solution containing HF. At the second step, the nickel-phosphorus alloy (Ni-P) film was electrolessly formed on the Si substrates by using NiSO4 as a metal salt and NaPH2O2as a reducing agent. The adhesion of the electrolessly deposited Ni-P films on Si substrates was examined by a tape test based on Japanese Industrial Standard JIS H8504 corresponding to ISO 2819. The adhesion was evaluated by maximum Ni-P film thickness that occurred no peeling by the tape test. We analyzed the interfacial structure of Au/Si by X-ray diffraction (XRD, Rigaku Ultima IV) and transmission electron microscopy (TEM, JEOL JEM-2100).

Figure 1 shows the XRD patterns of Au nanoparticles on p-Si(100) substrates. Only Au(200) diffraction line was obtained for the sample immersed in the Au-deposition-solution for 120 s (Fig.1 (a)). The cross-sectional TEM observation of Si wafer Au-nanoparticle-deposited for 210 s revealed that Au nanoparticles epitaxially grew on Si and each particle was single crystalline. At the interface between Au and Si, Au-Si alloy formation was observed by TEM and XPS (3). Farther deposition yielded Au(200) and (111) diffraction lines such as Fig.1 (b) for immersion deposition time of 240 s.

The present work was partly supported by KAKENHI (26289276) from JSPS. 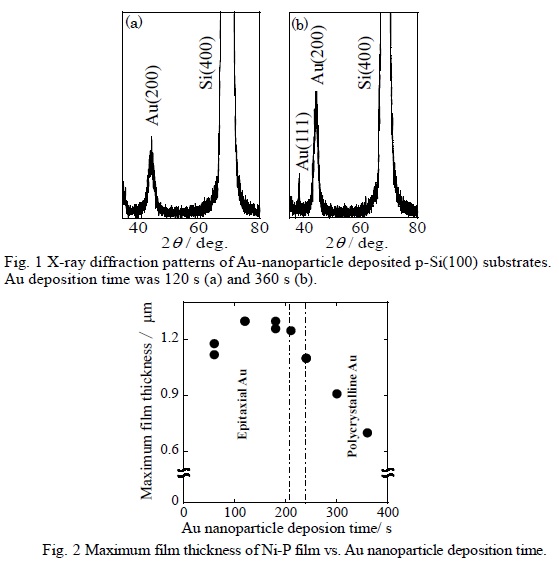