Electrochemical detection of electroactive molecules is a quantitative and sensitive methodology to characterize neurotransmitter release. Enzymatic immobilization onto an electrode surface offers a route to indirectly detect non-electroactive neurotransmitters, such as glutamate. However, diffusion away from the electrode surface and biological reuptake of analytes can render electrochemical biosensing of neurotransmitters challenging. Furthermore, detection as close as possible to the transducer element is desirable. Many bienzymatic systems rely on multilayers of enzymes and polymers, which may hinder analyte diffusion and result in slow sensor response times.

Rand et al. previously constructed an electrochemical glutamate sensor based on the immobilization of two different enzyme systems to amplify glutamate in solution.1 Here, we describe a bienzymatic system for amplification and in situ electrochemical detection of glutamate within pyrolyzed carbon gapped electrodes spaced in closer proximity than has previously been reported for bienzymatic glutamate sensing. Carbon electrodes offer a wider potential operating window, less susceptibility to biofouling, and more stability in ionic solutions, as compared to noble metal electrodes fabricated from platinum or gold.2 Electrodes were fabricated from pyrolyzed photoresist (PPF), an amorphous pyrocarbon material that enables photolithographic patterning of electrode devices and sensors.3 An interdigitated electrode array (IDEA) geometry, in which two sets of individually-addressable electrode bands 1-3 μm wide and spaced approximately 1-3 μm apart, was adopted (Figure 1). Thus, redox-active species can be electrochemically generated at one band (the generator) and detected at the other band (the collector). Due to the small spacing between adjacent electrode bands, a redox species can be electrolyzed at the collector and diffuse back to the generator several times (redox cycling), which has been shown to amplify the current at both the collector and generator when the electrode is operated in a generator-collector or dual mode.4, 5

Although redox cycling in typical IDEAs is achieved with oxidation/reduction when operated in dual mode, we chose to devise an analyte cycling strategy based on the re-generation of glutamate via a dual enzyme system that did not rely on electrochemically-driven oxidation/reduction (Figure 2). Firstly, glutamate oxidase (GLUT), which converts L-glutamate into 2-oxoglutarate and hydrogen peroxide, is immobilized onto one of two individually-addressable electrode bands within the PPF IDEA. A second enzyme, glutamate-pyruvate transaminase, which converts 2-oxoglutarate and L-alanine back into glutamate, is immobilized on the other electrode. Due to the small spacing between each type of electrode, cycling of enzymatic products (e.g., glutamate and 2-oxoglutarate) will occur resulting in an enhancement of electrochemically-detectable hydrogen peroxide under a negative bias.

One challenge of this sensor design is the patterning and stable attachment of enzymes. Oxidase enzymes are often immobilized onto carbon electrode surfaces via cross-linking in a matrix of glutaraldehyde and bovine serum albumin;6 however, these chemistries do not offer an inherent route to selective patterning of enzymes.  Microcontact printing of enzymes attached to polymer stamps can be utilized to achieve selective spatial distribution in a bienzymatic system, but is difficult to implement in an IDEA geometry with small spacing.1 Madou and co-workers have previously reported a method of glucose oxidase and 2,5-dihydroxybenzaldehyde (redox mediator) attachment to 2D millimeter-sized electrodes via electrochemical oxidation of amine linkers.7 We chose to adopt a related approach, by attaching 4-aminobenzoic acid (ABA) via electro-oxidation to the PPF surface and coupling the free carboxylic acid groups of ABA with several amine groups in lysine residues of GLUT with carbodiimide chemistry.

In this presentation, we will discuss experimental variables such as electrode width, spacing and height, as these variables been previously shown to play an essential role in PPF IDEA electrode response in terms of collection efficiency and current signal amplification when operated in generator-collector mode. Furthermore, microscopy, surface and electrochemical characterization of ABA-functionalized electrodes will be introduced to illustrate the challenges and merits of this approach to selective bienzymatic patterning. 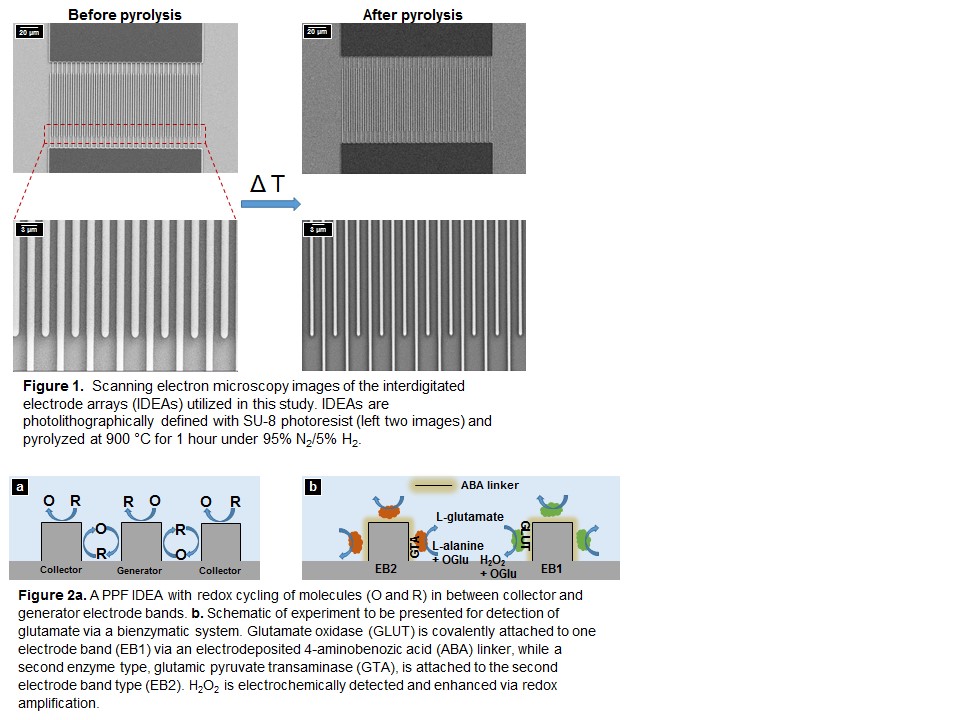