West Hall 1 (Phoenix Convention Center)
M. Hariri (York University) and S. Morin (York University)
The purpose of this work is to design and develop sensitive and selective nanostructured electrochemical sensors for the analyses of chromium (III) and iron (III) ions in different samples, such as drinking water, seawater, pharmaceutical products, soil and food.

Chromium is an essential metal to life in small amounts while toxic in larger quantities. Recommended chromium intakes are provided in the dietary reference intakes (DRIs) developed by the Institute of Medicine of the National Academy of science and serum chromium levels normally range from less than 0.05 up to 0.5 micrograms/milliliter (mcg/mL) in humans. For medical and environmental reasons, it is of great importance to determine how much of this metal ion is present in such media [1]. To date, many Cr (III) selective electrodes with PVC membrane, based on various ionophores, have been introduced; however, these sensors suffer from the disadvantages of a) significant interferences from other cations, b) deviation from Nernstian behavior, c) small linear range and d) narrow pH range of operation.

In addition, iron is an essential metal especially for biological systems since it plays an important role in many metabolic pathways, has an effective role in oxygen transport, storage and also in electron transport. The concentration of Fe(III) in biological systems has to be efficiently balanced as both its deficiency and excess can cause various biological disorders. Also iron is a vital element in environment systems as well as industries. The same iron limit-importance holds for environmental systems, such as fresh and seawaters, in which the iron concentration is claimed to be of crucial relevance [2]. It is therefore very important for biological, clinical, environmental and industrial purposes to efficiently detect Fe3+ion. Several methods such as AAS, ICP-MS have been reported for the determination of iron. However, these methods suffer from being time consuming as they involve multiple sample manipulations, instability if a large number of samples analysis is needed, and high cost.

The proposed potentiometric sensors were prepared by anchoring glyoxalbis (2-hydroxyanil) (GBHA) as well as Desferal ionophores onto TiO2/FTO glass as Cr (III) and Fe (III)-selective electrodes, respectively. These analytical devices based on nanostructured titanium dioxide were highly sensitive due to the large surface-to-volume ratio of the nanostructure, and additionally showed excellent selectivity as they did not have the disadvantages of the above-mentioned transition metal-determination methods.

One of the most important components of the proposed potentiometric sensor is the working electrode. TiO2/FTO glass substrate was chosen as the working electrode material. The TiO2 film was prepared following a standard method described elsewhere [3]. The morphology of the TiO2 films was investigated by scanning electron microscopy (SEM) to assure that the TiO2 particles formed a homogenous porous film and to monitor film thickness. The TiO2/FTO substrates were subsequently modified with the ionophores of interest (GBHA and Desferal) and the potentials of the varying concentration solutions of Cr (III) and Fe (III) were read form the voltmeter upon increasing the concentration of the test solutions.

Moreover, the performance of the sensors is discussed in terms of stability, response time, and possible interferences from other ions. For the latter studies, potentiometric selectivity coefficients were determined by the Matched Potential Method (MPM) for the alkali, transition metal and other heavy metal ions as interfering ions. According to our results, the interfering ions could not disturb the functioning of the proposed sensor electrodes significantly, indicating negligible interference in the performance of the nanostructured sensor assemblies.

The fabricated sensors are to be tested for the analysis of some water samples and food materials for the determination of Cr (III) and Fe (III) ions. The designed TiO2-based nanosensors offered simplicity, rapidity, and reliability as an analytical tool. 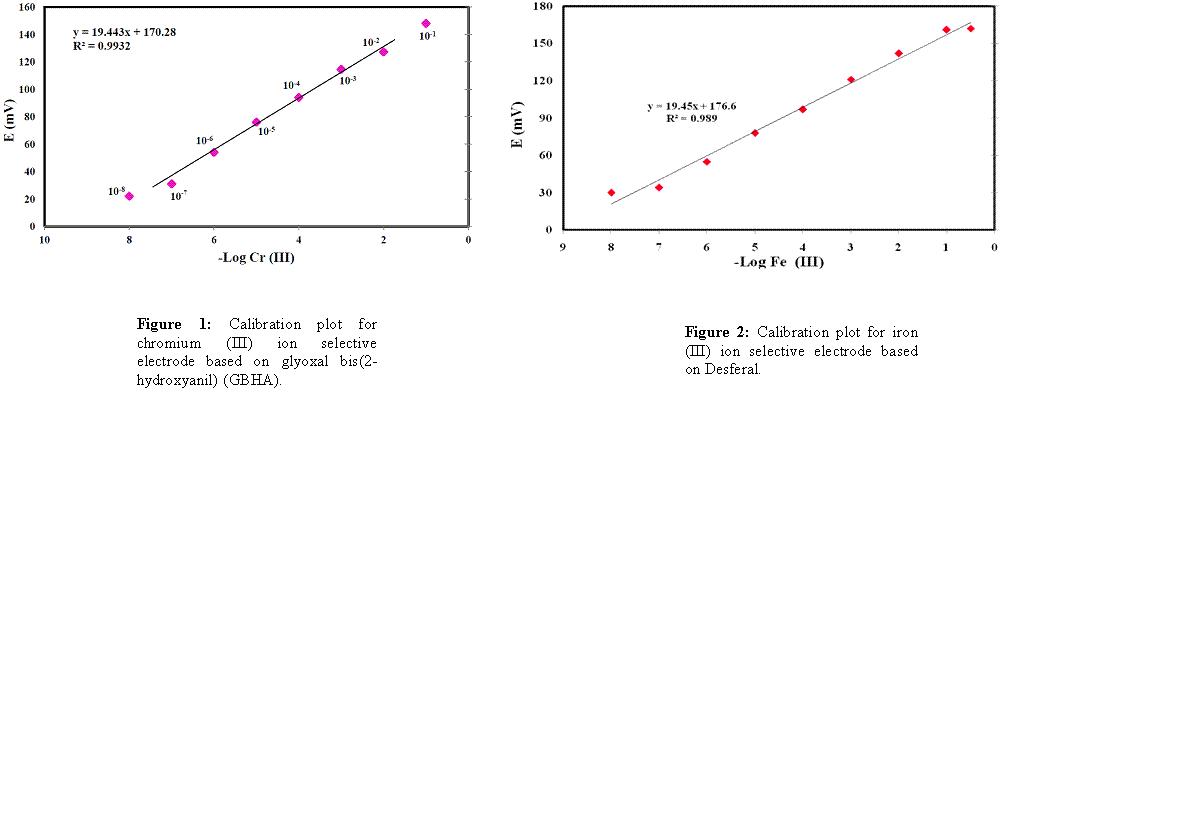