West Hall 1 (Phoenix Convention Center)
Y. Jiang (University of California Berkeley) and T. Devine (University of California Berkeley)
Nickel-based Cr-Fe alloys have been found to show very low corrosion rates in extreme environments, such as high temperature, high pressure and hydrothermal conditions. As a result, these alloys have been extensively used in industries, such as in nuclear power plants. One of the reasons that Ni-Cr-Fe alloys show good corrosion resistance is that there are oxides that prevent the bare metal from general corrosion [1]. However, Pressurized Water Reactors (PWRs) have experienced stress corrosion cracking (SCC) on the primary side of the Alloy 600 (Ni-15Cr-9Fe) steam generator tubing.  SCC is one of the most severe problems concerning maintenance cost and safety in the nuclear industry. Different theories have been developed to understand the SCC of Alloy 600, but none of the theories addresses the effects of all the factors, which includes material microstructure, residual stress, pH, water chemistry, etc [2]. However, among all of the theories, it is believed that passive layer formed on Alloy 600 is crucial for SCC initiation. Our research aims to understand the influence of surface oxides of Alloy 600 on SCC in primary water of PWR. In particular, we are working to address the effect of aqueous Zn ions, as these ions are one of the treatments applied in industry to reduce SCC susceptibility of the material.

The passive layer formed on Alloy 600 consists of an inner layer of Cr-rich spinel and an outer layer of Fe/Ni-rich spinel [3]. It is known that Zn addition can cause structural and compositional changes in the double layer, and these are considered responsible for suppressing SCC of Alloy 600, but the main mechanism is still under debate. The Zn incorporation process is of great importance in the way that it can help understand the mechanism of SCC initiation. Other researches have studied Zn effect on the morphology and chemical composition of Ni-based alloys using different characterization techniques, such as XPS, AES and XRD [4]. However, all of the results are based on long period oxidation time (over 100 hours).

We examined the effect of Zn ions on the passive layer using in-situ electrochemical method as well as ex-situ characterization method. We constructed a system simulating the high temperature primary water with 100ppb Zn addition and operated the system at 320 C and 1800psi. The sample was oxidized in the autoclave for up to 48 hours. During the oxidation period, potentiodynamic polarization and impedance spectroscopy was applied in order to get information of how the alloy performs at different potentials over time. Our electrochemical impedance spectroscopy (EIS) study indicated that there was likely a change in oxide property on Alloy 600, likely related to the incorporation of Zn ion, during short oxidation period, i.e. 7-20 hrs. Figure 1 shows the EIS data from the alloy 600 sample oxidized for 48 hours at open circuit potential, and indicates that there is a change of oxide impedance at the short oxidation period. Cross-sectional TEM was conducted on oxidized samples as well as EDS in order to determine the morphology and chemical profile of the passive layer. We found that with time increases, the passive layer became less porous, which agreed with the increase of impedance data over time. Zn was found to incorporate into the passive layer of the oxide at a short time oxidation sample, substituting some of the Ni content in the passive layer. As time increased, the content of Zn incorporation increased. 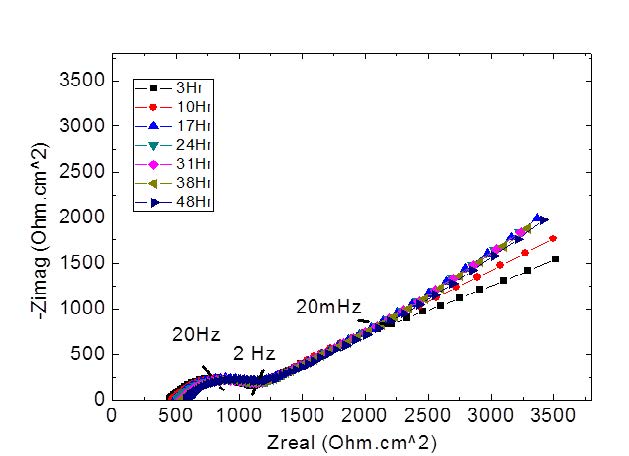