West Hall 1 (Phoenix Convention Center)
D. Bane, G. Subramanyam (University of Dayton), and K. M. Hansen (University of Dayton)
Biomarker detection is of paramount importance to the medical community for the assessment of health and human performance.  Two biomarkers of interest are orexin A (a biomarker of cognitive function) and trimethylamine (a biomarker of the disease trimethylaminuria).  For the purpose of orexin A and trimethylamine detection, resonant capacitive sensors with a peptide functionalized guanine dielectric layer are designed and fabricated, Figure 1.  The molecular recognition peptides, Table 1, selectively capture the biomarkers.  The binding of the biomarkers to the peptides changes the permittivity of the dielectric layer resulting in a significant shift in the resonant frequency, amplitude, and phase of the sensors thereby indicating the biomarkers’ presence.

Due to the limited utilization of guanine in electronics, the first objective in designing these sensors has been guanine characterization.  For characterization purposes, guanine was deposited as the dielectric layer in a capacitive test structure (CTS), and from these structures, the dielectric constant and loss tangent of guanine was determined by comparing the measured scattering-parameters (S-parameters) to an electrical model of the device.  Subsequently, guanine was deposited as the dielectric for the resonant capacitive sensor to determine the resonance of the guanine-integrated structure and to serve as the sensor platform.

After guanine characterization, the next objective is to investigate methods for peptide functionalization.  The two methods of interest are spin-coating and chemical tethering (preferred).  In order to be successful, the peptides must adhere to the guanine in a manner that does not interfere with the biomarker binding sites.  The chemical tethering method offers a way to covalently cross-link the peptides to the guanine, but the spin-coating is less likely to interfere with the peptides’ binding sites.

After determining a functionalization method, the guanine will be functionalized with peptides using this method.

The final objective is to test the fabricated sensors.  For testing, the S-parameters are measured to determine the resonance of the sensors pre-exposure (baseline) and following exposure to positive (orexin A in aqueous phase and trimethylamine in vapor phase) and negative controls. 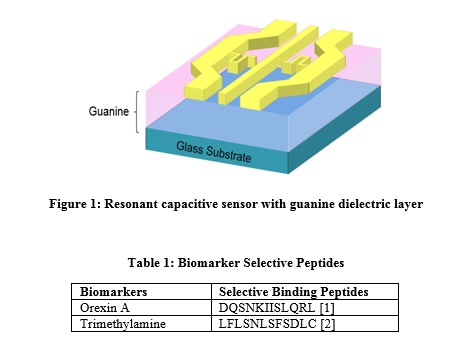