West Hall 1 (Phoenix Convention Center)
R. M. Bandeira, F. A. D. S. Ferreira (Universidade de Săo Paulo), U. P. Rodrigues Filho (Universidade de Săo Paulo), and G. Tremiliosi-Filho (university of Săo Paulo)
Introduction
Aluminium alloys are lightweight materials with good mechanical properties widely used in automotive and aerospace industries. Polyaniline (PANI) has been highlighted as coating given its redox properties. Mirmohseni and Oladegaragoze compared the protective effective of PANI and PVC (Polyvinyl Chloride) on iron, in solutions of NaCl and HCl, and revealed that the PANI was preferred by the formation of an oxide passive layer on the substrate induced by the redox properties of PANI [1]. Thus, in this work are presented the results regarding to the corrosion protection of PANI/PVC blends on AA7075 alloy.

Experimental
The PANI was synthesized from analytical grade reagents and undoped to obtain its emeraldine base (EB) form. The PVC used was purchased from Sigma-Aldrich. The blends were prepared from dispersion of PVC into NMP (N-methyl-2-pyrrolidone), under stirring, followed by addition of PANI powder. For each blend solution, the total mass used was 0.1667 g dispersed into 5 mL of NMP. That is, PANI/PVC 1/1 was consisted of 0.0834 g of PANI and the same mass amount of PVC. Finally, the electrodes (AA7075 alloy) were coated by casting, with 800 μL of PANI/PVC solution. The electrodes were heated up to 60±2 °C to evaporate the solvent. Pure PANI and PVC coatings were also prepared using the same methodology and their protective properties were evaluated.

Results and Discussion
Fourier Transform Infrared Spectroscopy in Transmission mode (T-FTIR) confirmed the PANI in emeraldine base (EB) form. The protective action of the coatings was evaluated toward 3.5 wt% NaCl solution. The anodic polarization curves are presented in Figure 1. The curves show expressive differences between the neat and coated substrates. The neat substrate presented a corrosion potential (Ecorr) of -1.12 V and corrosion current density (jcorr) about 6x10-6 A cm-2. All the coatings shifted to, both Ecorr and jcorr, more positive and lower values, respectively. The improved protection is assigned to the combination of the redox effect from PANI and to the resistance to electrolyte diffusion of PVC. Among the blends, PANI/PVC 1/1 was the one with highest Ecorr value (-0.041 V), followed by PANI/PVC 3/4, that had the lower jcorr (0.11 nA cm-2) and, therefore, lower corrosion rate (CR), similar to those obtained for pure PVC coating.

Scanning Electron Microscopy coupled to Dispersive X-ray Spectroscopy (SEM-EDX) revealed the disposal of the blend compounds. From SEM images, Figure 2, can be observed that PANI and PVC (Figures 2a and 2b) display a homogeneous surface, without segregation. However, both PANI/PVC 1/1 as PANI/PVC 3/4 (Figures 2c and 2d) display an island-like phase segregation which becomes smaller as the amount of PVC increases (PANI/PVC 3/4) leading to a better distribution of the island-like forms. From contact angle data (inserts in Figure 2) is possible to affirm that all coatings have a hydrophilic characteristic with the blends presenting quite average wettability characteristics of PANI and PVC [2]. Elemental analysis mapping of chlorine (Cl Ka = 2.621 keV) obtained for PANI/PVC 1/1 (Figure 2f) revealed that the islands formed, lighter portion in Figure 2e, are mainly composed by PVC domains. Therefore, the dark portion is basically PANI domain.

Conclusions
PANI/PVC coatings were successfully deposited on AA7075 alloy. Despite heterogeneity of their morphology, revealed by SEM-EDX analysis, there was an expressive improvement of corrosion resistance of AA7075-T6 alloy toward 3.5 wt% aerated NaCl solution. The synergistic behavior between PANI and PVC in the blends led to a decrease of current density and shift of corrosion potential to more noble regions, especially PANI/PVC 1/1 and PANI PVC 3/4.

Acknowledgements: The authors would like to thank the financial support of FAPESP, n° 2013/03483-2. 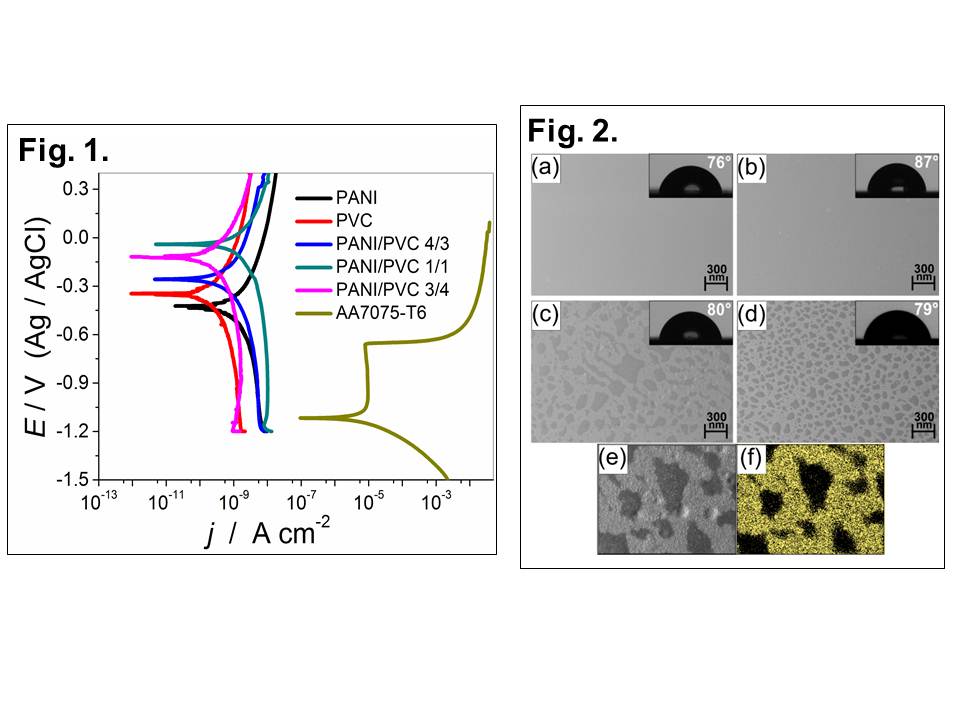