West Hall 1 (Phoenix Convention Center)
K. Ogle, V. Shkirskiy, P. Volovitch, P. Zhou (Insitut de Recherche de Chimie-Paris), and A. Maltseva (Insitut de Recherche de Chimie-Paris)
A novel coupling between atomic emission spectroelectrochemistry (AESEC) and electrochemical impedance spectrometry (EIS) is demonstrated.  With the AESEC - EIS combination it is possible to distinguish situations in which the oxidation of the metal leads directly to the formation of dissolved ions or passes through a slightly soluble film intermediate. In the former case, it is possible to measure fundamental electrokinetic parameters in a single experiment. In recently published work, this technique was used to investigate the kinetics of dissolution for nearly pure Zn and Mg [1,2]. This poster will present the basic technique and show additional applications to alloys of two and three elements (Zn-Cu and Zn-Al-Mg).

The methodology is illustrated with three examples:

1) Zn dissolution versus film formation:  This simple system is used to demonstrate the fundamentals of the technique as it involves only a single element. Zn dissolution 0.1 M NH4Cl occurs without any significant solid intermediate as evidenced by the excellent correlation between the AC components of the electrical current and the zinc dissolution rate (See Figure). Analysis of the dissolution rate and total current transients as a function of potential directly yields the anodic and cathodic Tafel slopes for this system. In contrast, for Zn / 0.5 M NaCl, electrochemical oxidation leads directly to the formation of an intermediate corrosion product film with subsequent dissolution. [1]

2) Brass dissolution in a citrate buffer and in synthetic tap water: The AESEC - EIS experiment was used to demonstrate that brass dissolution occurs in a nearly congruent fashion in a citrate buffer of pH = 5. However in a synthetic tapwater solution containing sulfates and carbonates, insoluble Cu(I) species are formed leading to differences between the Zn and Cu partial impedances. 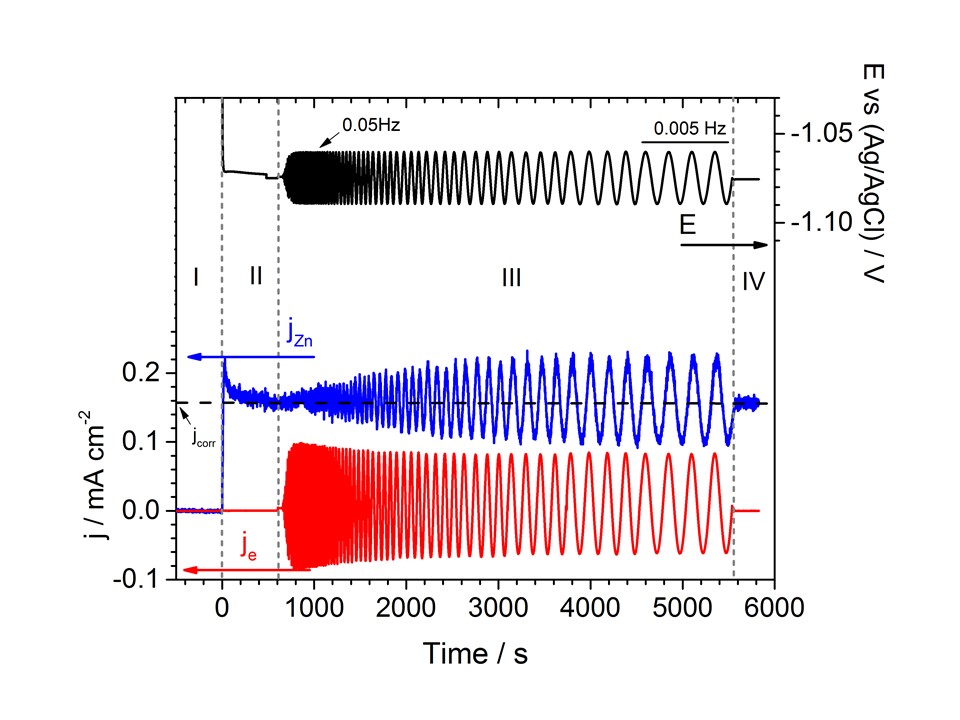