Lithium-ion batteries are the current state-of-the-art energy storage technology for advanced electric vehicles and portable power applications due to their high energy density. The need for low cost lithium ion batteries has driven the development of inexpensive LiFePO4 cathodes, which offer a relatively high specific capacity (170 mAh·g-1) and relatively high discharge potential plateau (3.45 V) at a fraction of the cost of other materials. In additional to the low electrical conductivity, one of the major drawbacks of this material is the inherently slow lithium diffusion. Unlike spinel or layered structures, the olivine structure of LiFePO4 allows lithium diffusion in only one direction and therefore severely limits the intercalation rate due to slow solid-state diffusion. This limitation could be overcome by de-sizing the material in the < 010 >, the direction of diffusion. This can be achieved by synthesizing LiFePO4 nanosheet nests (LFP-NSN) using a directed growth method adapted and modified from a synthesis procedure reported earlier.1 Figure 1 shows the scanning electron microscopy (SEM) image of the LFP-NSN synthesized by our modified procedure.  Figure 2 shows the X-ray diffraction (XRD) pattern of the synthesized LFP-NSN, which compares well with the XRD pattern of orthorhombic, olivine-type LiFePO4 from the library.  For battery testing, the synthesized structures were mixed in a ratio 80:10:10 of LFP-NSN: Super C carbon: poly(vinylidine fluoride) in N-methyl pyrrolidone to form a slurry that was cast on aluminum foil to be used as the cathode in CR2032 lithium ion coin cells for testing and evaluation.

Fig. 1: a) SEM image and b) XRD pattern (black) with LiFePO4 characteristic peaks identified in red of LFP-NSN synthesized by a solvothermal reaction.

The authors would like to thank Dr. Tina Salguero and Dr. Zhengwei Pan for their help in this project. 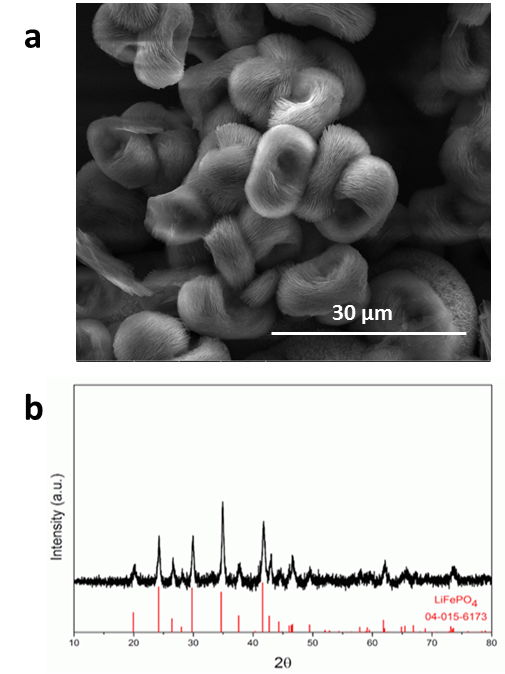