Borein A (Hyatt Regency)
T. S. Watkins (Arizona State University) and D. A. Buttry (Arizona State University)
Despite the theoretical advantages of using Mg-based electrochemistry, a rechargeable magnesium battery suitable for practical applications has yet to be realized.1,2 One of the biggest factors hampering Mg battery development is discovery of an electrolyte that is compatible with reversible deposition/dissolution at the anode as well as the chosen electrochemical process at the cathode. One of the big breakthroughs in this field came when Grignard, and Grignard like, reagents were combined with RxAlCl3-x to form Mg-organohaloaluminate complexes.3 The resulting transmetallation reactions result in electrolytes with greater conductivity and oxidative stability than their pure Grignard predecessors. Boron-based systems have also shown promising electrochemical behavior.4,5

All of the reversible Mg electrolytes have thus far only been shown to work in ether based solvents, and mainly reported specifically in THF. There are a few practical reasons for this, which will be discussed in this presentation. However, our group was interested in testing the Al and B-based systems in Ionic liquids (ILs), which have several advantageous electrochemical characteristics of their own.6 We therefore report on studies of Mg-organohaloaluminate/borate complexes in ILs. Speciation conditions within the IL media will be discussed and correlated with the electrochemical behavior. Figure 1 shows one such example in which PhMgCl was combined with AlCl3 at a 2:1 molar equivalent ratio within butyl-methylpyrrolidinium bis(trifluorosulfonyl)imide (BMPyrTFSI). This work builds on efforts in our group and elsewhere that has shown a great difficulty with obtaining reversible deposition/dissolution of Mg in ionic liquids using more conventional Mg salts.7 Data like that of figure 1 demonstrate that the appropriate combination of ionic liquid and Mg complex could provide a capable electrolyte for Mg batteries. The unusual looping from the current response in figure 1 is a result of conditions unique to ionic liquids and will be discussed. Further conditions to be considered here will be the effect of the R group, IL cation/anion, temperature, concentration and Mg:Al or Mg:B ratio in the solutions. 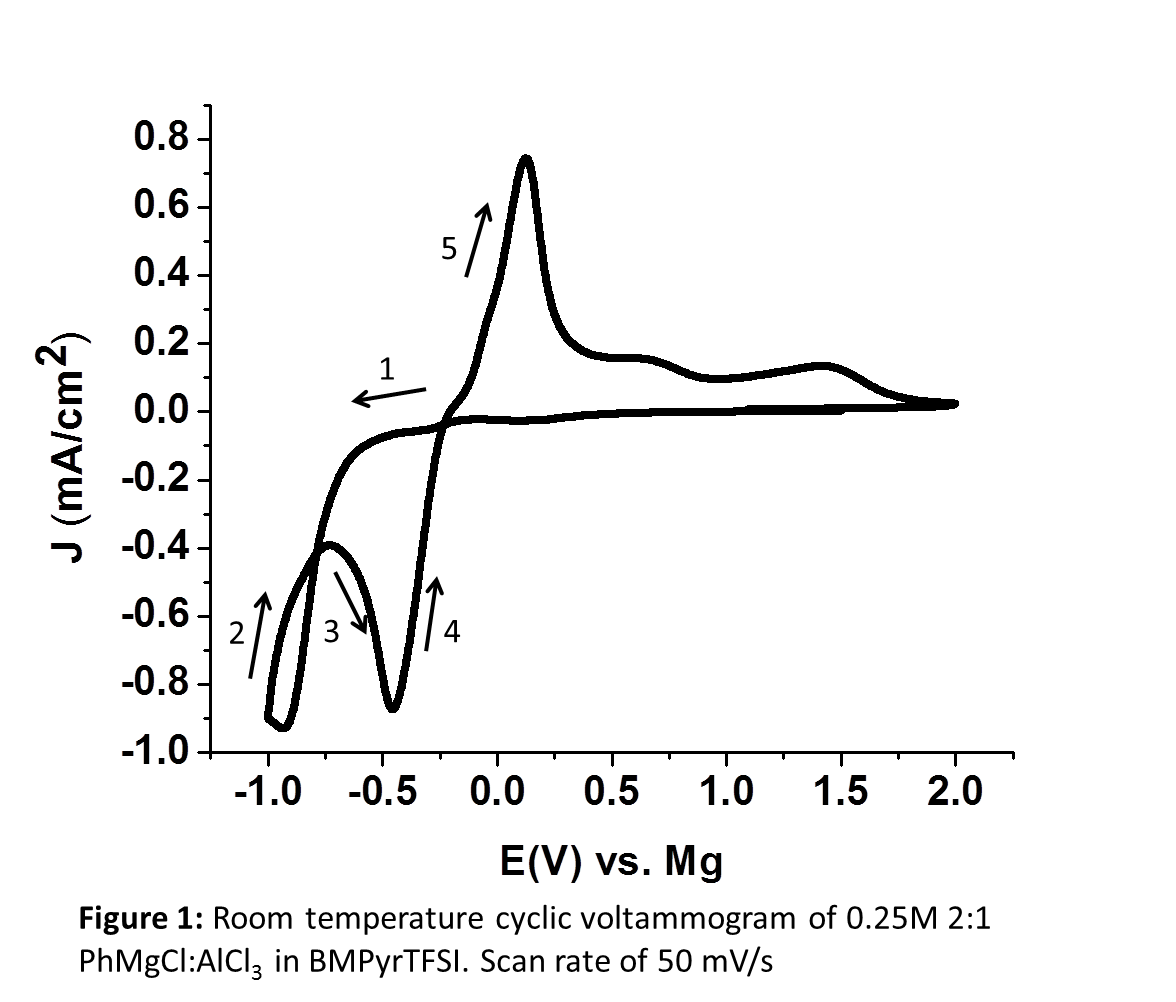