102-A (Phoenix Convention Center)
K. Nakao, E. Tada (Tokyo Institute of Technology), and A. Nishikata (Tokyo Institute of Technology)
Stainless steels have been widely applied in the building, chemical plants and other industries due to their excellent weldability, superior anticorrosion properties, and so on. However, stainless steels suffer from localized corrosion in chloride-containing environments. Especially, in an atmospheric environments near the seashore, localized corrosion can be initiated easily because a very severe corrosion condition, a thin water-layer containing very high concentration of chloride ions, can be made on stainless steels. Moreover, local corrosion sites such as pits can become initiation sites for crack initiation of stress corrosion cracking (SCC) when the steels are subjected to tensile stress. Therefore, it can be considered that atmospheric SCC is one of the most severe degradations for stainless steels in atmospheric corrosion environments. There are some researches to investigate SCC in the atmospheric corrosion environments with chloride deposits1, 2. This study is aimed at investigating initiation and propagation of stress corrosion cracking of sensitized 304 stainless steel under tensile stress in MgCl2droplets.

Austenitic 304 stainless steel sheet of 1 mm in thickness were used as a material. Tensile specimens with a gauge part of L15 mm x W8 mm were cut out from the sheet. The specimens were heated for 90 min at 700 oC and followed by furnace cooling for sensitization. The sensitized specimens were abraded to JIS #1000 grit with SiC papers. Then they were degreased with ethanol in an ultrasonic bath and rinsed with Milli-Q water (18 MWcm). SCC behavior under MgCl2 droplets was investigated by a constant strain tensile test with a horizontal tensile test machine. In the test, a specimen was first elongated to a certain stress value and then kept at a constant strain. After applying the constant strain, 20 mL droplets of 250 mM MgCl2 were placed on the gauge part of the specimen. The gauge part with the droplets was exposed to an environment at 50 OC and ca. 35 RH% for 3 days in a small chamber. During the test, in-situ surface observation was carried out with a digital microscope. After the test, surface of the specimen was observed by SEM-EDX.

Fig. 1 shows surface and cross-sectional images of sensitized 304 stainless steel with 8.5% strain under MgCl2droplets. When the droplets are place on the gauge part of the specimen, the droplets evaporate and reach to an equilibrium state with the concentration of 10 M at 35%RH. At this time, the thickness of the solution film of the droplets can be estimated to be 70 mm. Actually pitting corrosion was initiated within 1 h after the droplets were applied. As shown in Fig. 1(a), which is taken at 12 h after a pit is formed in a droplet, some tiny cracks initiate from the edge of the pit. As the test time advances, the cracks propagate in the normal direction to the tensile axis and reach ca. 600 mm after 72 h. During the propagation of the cracks, hydrogen bubbles gushing from the inside of the cracks were observed. Cross-sectional observation in Fig. 1(d) reveals that cracks initiate from the bottom of the pit and propagate in the bulk direction both with transgranular and intergranular cracking modes. In the presentation, crack propagation mechanism of sensitized 304 stainless steel will be discussed. 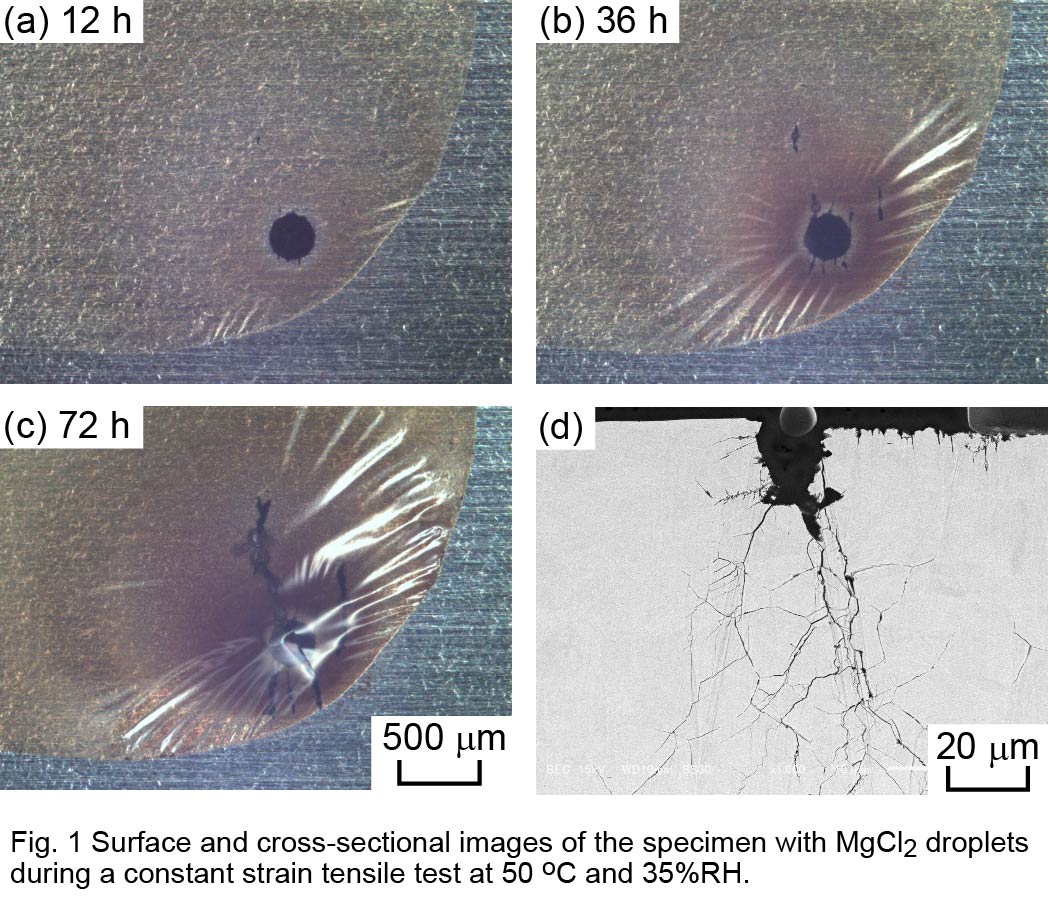