West Hall 1 (Phoenix Convention Center)
K. Machida (Graduate School of Engineering, Kogakuin University), H. Asoh, N. Yoshida, T. Okura (Department of Applied Chemistry, Kogakuin University), and S. Ono (Department of Applied Chemistry, Kogakuin University)
Wettability is one of the important properties of solid surfaces from both fundamental and practical aspects. Among various factors, surface energy and roughness are the dominant factors for the wettability. Static wettability, that is, water contact angle (WCA) has been commonly used as a criterion for the evaluation of hydrophobicity of solid surface. In recent years, WCA can be designed easily by controlling surface energy and roughness based on Young’s, Wenzel’s, and Cassie’s equations. On the other hand, dynamic wettabilities such as sliding property on the hydrophobic surface are poorly undersutood. Although water sliding angle (WSA: the critical angle where a water droplet with a certain weight begins to slide down the inclined plate) and contact angle hysteresis (the cosine of receding contact angle minus that of advancing contact angle) are often measured to evaluate the water-repellent property of the hydrophobic surface, comprehensive understanding of the water-repellent properties is still limited because the relationships between the WSA and the WCA are not clear [1-2]. In this study, we used nanoporous silicon surfaces with different surface morphologies, which were formed by metal-assisted chemical etching using Ag nanoparticles, as a solid surface. Static and dynamic wettabilities of their surfaces were investigated with focusing on the influences of pore size and surface roughness on wettability of porous silicon surfaces.

p-type silicon (100) substrates were immersed in a mixed solution of 2×10-2 mol dm-3 AgNO3 and 5 mol dm-3 HF to deposit Ag particles on the entire surface of silicon substrates. After deposition of Ag particles, silicon substrates were immersed in a mixed solution of 10 mol dm-3 HF and 1 mol dm-3 H2O2at room temperature at different time. SEM images of obtained porous silicon after etching with different surface roughness are shown in Fig. 1. WCAs (approximately 135°) of etched silicon were higher than that of flat silicon (75°), presumably due to decrease of contact area between porous structure and droplet based on Cassie’s model. Although surface roughness increased with increasing etching time, however, WCAs of etched silicon were about the same (135°) despite the difference in surface morphologies (Fig. 1a-c). On the other hand, WSAs increased with increasing surface roughness. The changes in WSAs were thought to be caused by the pinning effect generated by increase of pore diameter and surface roughness during chemical etching. These results indicate that WSA is affected more significantly by physical inhomogeneity such as surface roughness of the etched surface than WCA. 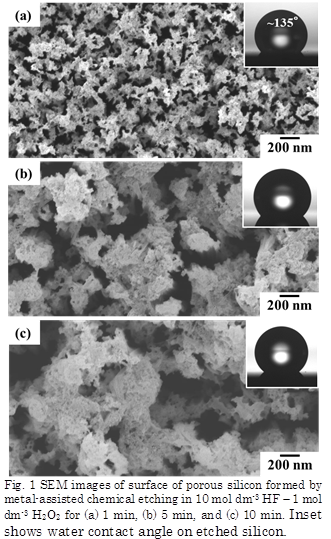