West Hall 1 (Phoenix Convention Center)
R. He (San Diego State University) and D. K. Smith (San Diego State University)
Proton-coupled electron transfer (PCET) reactions are essential to many of the fundamental chemical processes of life. In the Smith group we are investigating the role of H-bonding intermediates in PCET by studying the voltammetry of compounds capable of multiple, strong H-bond interactions.  In particular we have studied a p-phenylenediamine-based urea, U(H)H, which contains two H donor sites making a DD array. This compound undergoes an apparent one electron oxidation in aprotic solvents that actually corresponds to two electron oxidation of half of the ureas to a quinoidal cation, U(H)+, accompanied by proton transfer to and deactivation of the other half of the ureas by formation of  HU(H)H+.  This oxidation is reversible in methylene chloride due to the stability of the H-bond complex formed between U(H)+ and HU(H)H+.1 In this study, the phenyl group in U(H)H is replaced by an imidazole group to form a three hydrogen bond array. In this array, the two major conformers both present a DDA H-bond motif (1 and 2). Therefore, AAD arrays are needed as guest compounds to form three intermolecular non-covalent contacts.

The cyclic voltammetry of the three hydrogen bond DDA array has been examined in methylene chloride with platinum (Pt) and glassy carbon (GC) electrodes. On both electrodes, CV’s show two, closely-spaced, reversible waves of equal height. This contrasts with CV’s of U(H)H where only a single reversible CV wave is seen. We hypothesize that this difference is due to rapid intramolecular proton transfer in conformer 2, after one electron oxidation of the phenylenediamine unit.  This out competes the intermolecular proton transfer to the dimethylamino group on another phenylenediamine that occurs with U(H)H and results in deactivation of half of the ureas. With 1 and 2, complete two electron oxidation of all the ureas near the electrode is possible, although the second oxidation occurs at a slightly more positive potential due to the positive charge remaining on the array after the first oxidation. Interestingly, there is also a strong concentration dependence to the CV’s. When the concentration increases, the relative currents of both peaks decrease. We hypothesize that this is because proton transfer also happens between the highly acidic 5, produced at the electrode, and 2 coming in from the bulk. Since the dimethylamino group is the most basic site on 2, it gets protonated, resulting in the deactivation of incoming urea. When the concentration increases, this transfer will be faster, resulting in a smaller amount of active urea reaching the electrode. In future work, the voltammetry of the electroactive DDA array will be investigated in the presence of an AAD guest to determine if and how this changes the mechanism of the oxidation. 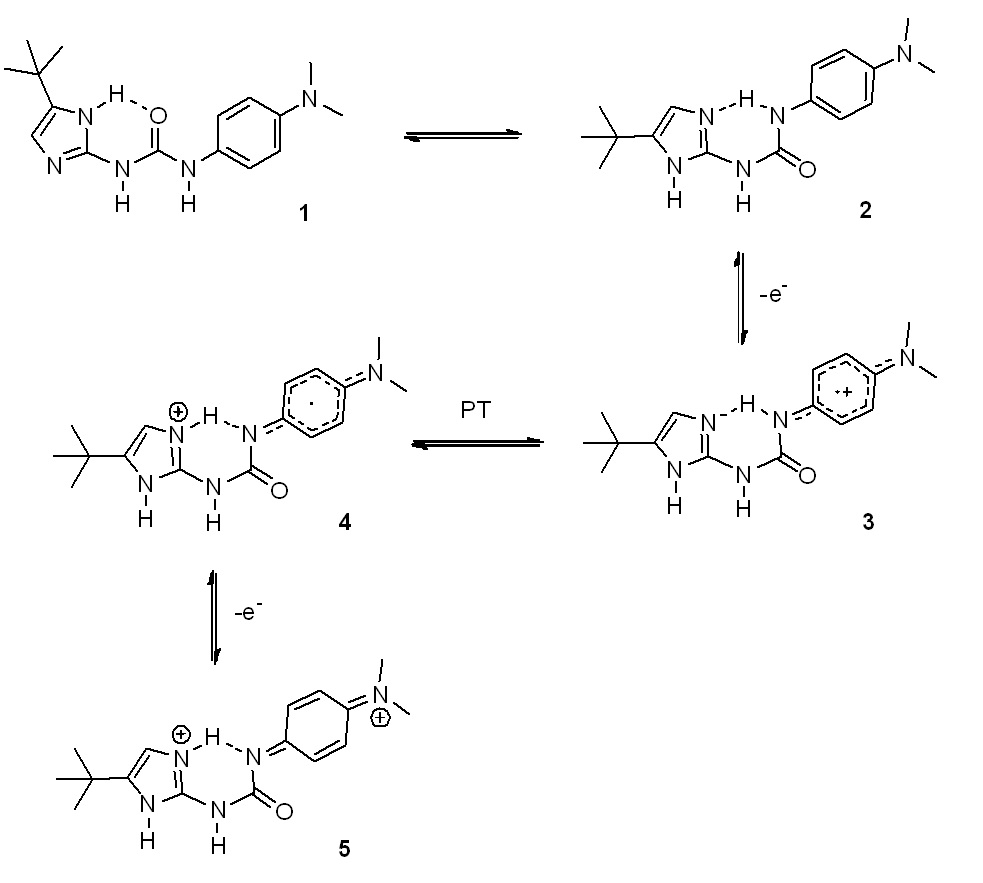