West Hall 1 (Phoenix Convention Center)
H. Asoh (Department of Applied Chemistry, Kogakuin University), S. Ono (Department of Applied Chemistry, Kogakuin University), and D. Ito (Graduate School of Engineering, Kogakuin University,)
Micro-/nanostructures formed on semiconductor substrates have been applied in various devices such as electronic devices and biosensors. In particular, III-V semiconductors (e.g., GaAs, GaN, and InP) have received a great attention for realizing future generation optoelectronic devices owing to their excellent optical and electrical properties including high electron mobility and a direct band gap. Recently, we have reported the fabrication of ordered pore arrays, pillar arrays, and nanowire arrays with a high-aspect-ratio in n-type GaAs (111) B substrate by a combination of anodic etching and subsequent chemical etching [1–3]. The controlled GaAs micro-/nanostructures have potential technological and scientific applications in optoelectronics and chemical sensors that require ordered patterns, high device densities, and high surface-to-volume ratios. In this study, we investigated the effects of etchant composition on the orientation-dependent surface morphology of GaAs during anisotropic chemical etching using various types of etchants.

p-type GaAs (111) B was mainly used as a substrate. To control the reactive sites during chemical etching, the photoresist layer with the honeycomb-like openings of 3 μm periodicity was applied as a mask, as described in our previous report [1]. The GaAs substrates coated with a photoresist mask were immersed in various types of etchants consisted of acid (H2SO4, H3PO4, HF) and oxidant (KMnO4, H2O2) at 20°C. When a mixture of 2 mol dm−3 H2SO4 and 0.05 mol dm−3 KMnO4 was used as an etchant, etch pits having curved bottom and hexagonal aperture were formed (Fig. 1a). The diameter and depth of pits were 1.7 µm and 0.6 µm, respectively. Although pore diameter increased with increasing etching time from 30 s to 150 s, the profile shape of etch pits was not clear (Fig. 1b). However, when KMnO4 concentration increased to 0.2 mol dm−3, anisotropic etching proceeded obviously, resulting in the formation of pit arrays with equilateral-triangular aperture depending on crystal plane of {100} (Fig. 1c). On the other hand, shallow etch pits with hexagonal aperture were formed by chemical etching for 30 s using 0.05 mol dm−3 H2O2 as an oxidant instead of KMnO4 (Fig. 1d). With further chemical etching for 300 s, the diameter of etch pit increased causing lateral etching (Fig. 1e). However, the obtained etch pits were shallower than that of pits formed using KMnO4 of the same concentration despite longtime etching. These results indicate that etching rates for each crystal plane are strongly affected by the type and concentration of oxidants. Correlation between the etchant composition and orientation-dependent surface morphology of GaAs after chemical etching will be discussed in detail. 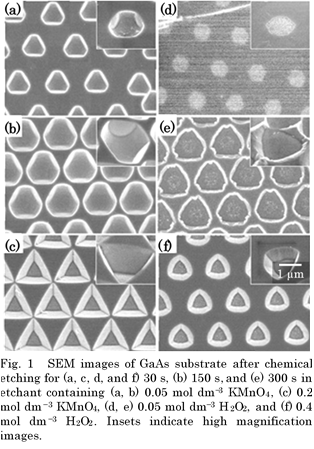