100.0 mg MWNTs-COOH was first dispersed in 60 mL DMF solution undergoing 1h sonication, the solution was then transferred to a 250-mL 3-neck flask and heated to reflux (~160 °C) in ~ 20 min. For the synthesis of FePd-based nanocatalysts, 202.0 mg well dispersed Pd(acac)2 in 20 mL DMF was added to the refluxing MWNTs-COOH/DMF solution. Fe(CO)5 (130.2, 437.0, and  875.0 mg) was following added to the solution after boiling again in ~ 5 min, the products were donated as FePd-Fe3C/MWNTs, FePd-Fe2O3(3:5)/MWNTs and FePd-Fe2O3(3:10)/MWNTs, respectively(the composition was determined by Mössbauer spectrometer). For the control synthesis of Pd/MWNTs and Fe3O4/MWNTs, only 202.0 mg Pd(acac)2 or 875.0 mg Fe(CO)5 was added to the refluxing MWNTs-COOH/DMF solution. All the solutions were maintained refluxing for an additional 3 hours to complete the whole reaction. Finally, after cooling down to room temperature, the solid iron containing products were removed from the suspension using a permanent magnet and Pd/MWNTs were filtered under vacuum. All the final products were rinsed with acetone 3 times and collected after vacuum drying at 60 °C for 24 hours.

The Mössbauer spectrometer and XPS has successfully determined the compositions of catalysts with varying the amount of Fe(CO)5. Typical peaks of Fe2O3, Fe3O4 and FePd are clearly observed in XRD indicating the successful synthesis of FePd-Fe2O3/MWNTs. The interaction between NPs and MWNTs and the loading of catalysts was determined by Raman spectra and TGA. An greatly enhanced the peak current in CV and improved tolerance stability toward poisoning species are also demonstrated by CV, CV and EIS, which indicates the positive role of the FePd alloy and the Fe2O3 substrates.

Highly catalytic active and magnetic FePd-Fe2O3/MWNTs nanocatalysts have been prepared by simple thermal decomposing Pd(acac)2 and Fe(CO)5 in a refluxing dimethylformamide (DMF) solution in the presence of MWNTs-COOH. The formation of FePd alloy has been confirmed by the crystalline structures and composition investigation by XRD and XPS spectra. A unique structure as FePd NPs first deposited on Fe2O3 NPs which further uniformly dispersed on MWNTs was disclosed by TEM. Electro-characterizations as CV, CA and EIS demonstrated an enhanced catalytic performance compared with Pd/MWNTs towards EOR after the introduction of Fe. Modified electronic properties of Pd by Fe, easily proceeded poisoning species on γ-Fe2O3 and the optimal combination of promoter Fe2O3 and MWNTs substrate are mainly account for the greatly enhanced activity. This simple method is of great significance for the facile preparation of recyclable Pd catalysts with high catalytic activity.

The financial supports from University of Tennessee Knoxville are kindly acknowledged. 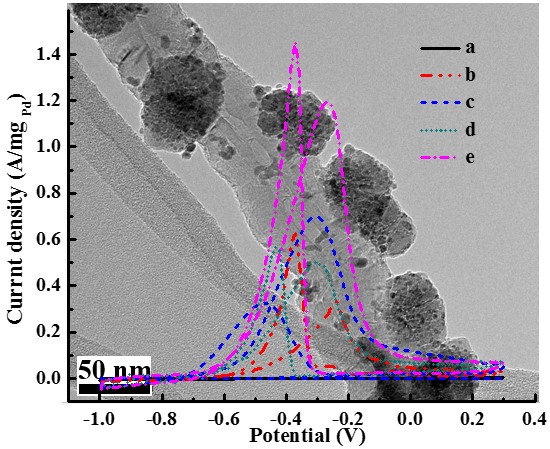