103-A (Phoenix Convention Center)
D. Priyadarshani (Indian Institute of Technology Bombay), P. Goradia (Applied Materials), A. Contractor (Indian Institute of Technology), R. Gouk, S. Verhaverbeke (Applied Materials, Inc.), and R. Visser (Applied Materials, Inc.)
This paper describes the electrochemical deposition of Cu by galvanostatic method on p-Si with high deposition rate. To prevent the diffusion of Cu into Si, a thin layer of Ni is used as a diffusion barrier. A novel bath i.e., high pH Nickel sulphate bath without reducing agent was used for the galvanic reaction to form a Ni seed layer. The SEM images show the thickness of smooth and dense Ni film is in the range of 190-200 nm. Resistance of the Ni-pSi was found to be ~0.28 Ω/sq by four point probe which is lower than the resistance of Si i.e, ~108 Ω/sq. Copper was deposited on this seed layer of Ni by applying a high electric field across the wafer by placing it between a copper plating bath and an acid electrolyte. A high DC voltage was applied between a copper sheet placed in the copper bath and a platinum sheet placed in the acid electrolyte. A deposition rate of about 3.85 um/min of Cu on Ni-pSi was achieved and the film showed good adhesion. This electrochemical reaction involves silicon dissolution from one face and simultaneous copper deposition on the other. SEM images show the compact and smooth Cu film having ~3.85 um thicknesses. This experimental value of the thickness is in agreement with the theoretical value expected for 100% current efficiency. The resistance of electroplated Cu film on Ni/p-Si was measured by four point probe and found to be 0.07 Ω/sq.

Fig: a and b: SEM image (Surface and Cross sectional) of Ni/p-Si

c and d: SEM image (Surface and Cross sectional) of Cu on Ni-pSi 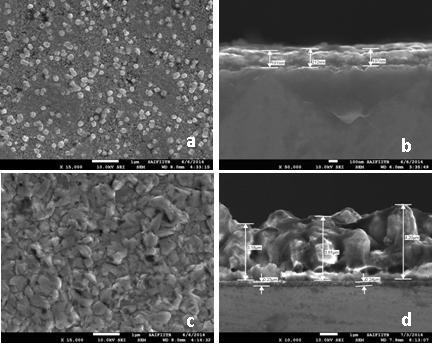