Curtis A (Hyatt Regency)
N. Quill (Department of Physics & Energy, University of Limerick), C. O'Dwyer (University College Cork and Tyndall National Institute), D. N. Buckley (University of Limerick, Ireland), and R. P. Lynch (University of Limerick, Ireland)
As has been previously described,1-5anodic etching of n-type InP, under certain conditions, leads to the formation of domains of pores beneath an ~40-nm-thick, near-surface layer of dense InP.  These domains have a characteristic truncated tetrahedral domain shape – as illustrated in the schematic of Fig. 1a – displaying triangular (01-1) and trapezoidal (011) cross-sections (left and right of schematic, respectively).  After extended etching these domains merge together to form a continuous porous layer beneath the dense, near-surface layer of InP.

If it were possible to etch the sub surface skeleton of the isolated domains without etching the near-surface layer then a suspended ~40-nm thick InP ceiling would remain above the etched region. A schematic of the structure that would be formed is shown in Fig. 1b.

At an elevated temperature InP is chemically etched by H2SO4.  We have found that at temperatures above 50°C chemical etching of porous InP using 7.5 mol dm-3 H2SO4results in a large degree of bubbles emanating from the sample surface after a short period of time.  Scanning electron microscopy (SEM) investigations of the cleaned samples shows that these bubbles corresponded to the rapid etching of the skeleton structure of InP in the porous domains with greater etching time or temperature resulting in further etching of the skeleton structure and significant etching of the near surface layer.

Fig. 2 shows an SEM micrograph of a cross-section of triangular voids and the resulting suspended ceilings formed by such chemical etching of two isolated porous domains at a temperature of 70°C. It can be observed that the near-surface layer and the triangular outline of the domains are still intact but that the internal skeleton structures are completely removed.   The majority of the isolated triangular voids observed for the experiment shown in Fig. 2 ranged from 350 to 450 nm; i.e. there was no significant etching outside the original domain volumes. Furthermore, measurements of the surface pit diameter for these voids showed diameters of between 40 and 45 nm, which corresponds to only a minor increase from diameters of between 10 and 24 nm prior to etching, verifying that the chemical etching selectively removes the internal skeleton structure of the domains. Such preferential etching could be the result of trapped etch products – either from the electrochemical or chemical etching steps – acting as catalysts for the chemical etch or taking part directly in the etch mechanism.

R. P. Lynch and N. Quill would like to thank the Irish Research Council (IRC) for PhD scholarships to perform this research.  R. P. Lynch acknowledges a joint IRC - Marie Skłodowska Curie Fellowship under grant no. INSPIRE PCOFUND-GA-2008-229520.  The authors would also like to acknowledge the support of the Tyndall National Institute through National Access Programme Funding. 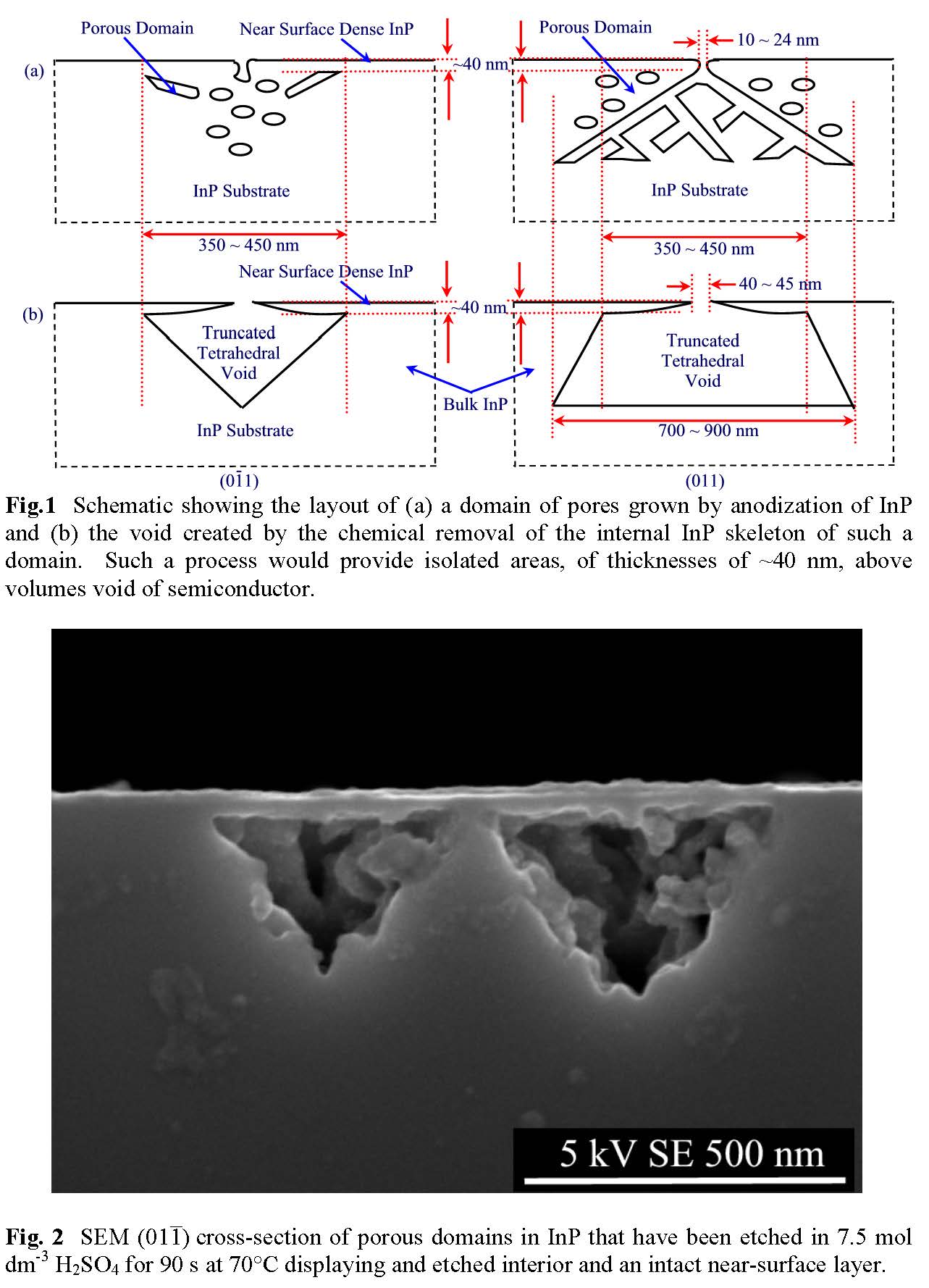