Curtis B (Hyatt Regency)
S. Menzel (Forschungszentrum Jülich)
Resistive switching devices based on the valence change mechanism (VCM) or electrochemical mechanism (ECM) have attracted great attention due to their potential use in future non-volatile memories. Both types of cells exhibit a bipolar operation principle: The cells can be set from a high resistive state (HRS) to a low resistive state (LRS) with one voltage polarity and reset back to the HRS by applying the opposite voltage polarity.

ECM cells consist of an ion-conducting layer sandwiched between a Ag/Cu active electrode and an inert counter electrode. The switching mechanism is based on the growth and dissolution of Ag/Cu filament within the ion-conducting host matrix involving the physical and electrochemical processes illustrated in Fig. 1.[1] The VCM stack typically consists of a mixed ionic-electronic conducting layer, e.g. a metal oxide, a high work function metal electrode and an oxidizable counter electrode. The switching process involves the movement of oxygen vacancies within the MIEC and subsequent local redox reactions in the cation sublattice.[2]

Fig.1: Illustration of the electrochemical processes occurring during SET switching in an ECM cell: charge-transfer reactions, nucleation, ion migration, filamentary growth. From [1] – Reproduced by permission of the PCCP Owner Societies

In order to fulfill the requirements of a nonvolatile memory a resistive switching device has to be switchable with a voltage amplitude of a few volts in the ns-regime and to offer a read-disturb immunity of up to ten years. This is equivalent to the driving physical processes exhibiting a nonlinearity of more than 15 orders of magnitude.[3]To understand the underlying electrochemical and physical processes is hence of fundamental importance.

In the present paper, simulation models for ECM and VCM cells will be presented with special emphasis on the underlying physical and electrochemical processes. Based on simulation results the SET and RESET switching kinetics will be discussed in detail.

ECM compact models,[1] continuum models[4] and kinetic Monte Carlo (kMC) models[5, 6] will be presented. All ECM models include the electrochemical and physical processes illustrated in Fig. 1: nucleation, electron-transfer reactions at the boundaries, ion migration and filamentary growth. The models are capable of capturing the observed experimental phenomena: nonlinear switching kinetics, multilevel switching, current-voltage characteristics and switching variability.[5]The multilevel switching is attributed to different tunneling gaps between the growing filament and the counter electrode at low current compliance and a filament widening if a galvanic contact is achieved. By comparison of the simulation results with experimental data the processes limiting the switching speed are discussed. Furthermore, the influence of mechanical stress on the filamentary growth will be addressed using kMC simulations.

The developed VCM simulation model is based on the solution of the drift-diffusion equation for oxygen vacancies and electrons coupled to Poisson’s equation and the heat transfer equation. Electron transport across the metal/oxide interface via thermionic emission and tunneling is also included within the model. Using this simulation model the nature of the gradual RESET and abrupt SET transition will be discussed. The gradual RESET can be explained as a result of a drift-diffusion balance. Moreover, the simulation results reveal that the switching kinetics in VCM devices are dominated by temperature-accelerated ion movement. Furthermore, the transition between bipolar and complementary switching can be explained by the variation of the metal/oxide interface properties.[7]

This work was supported in part by the Deutsche Forschungsgemeinschaft (SFB 917). 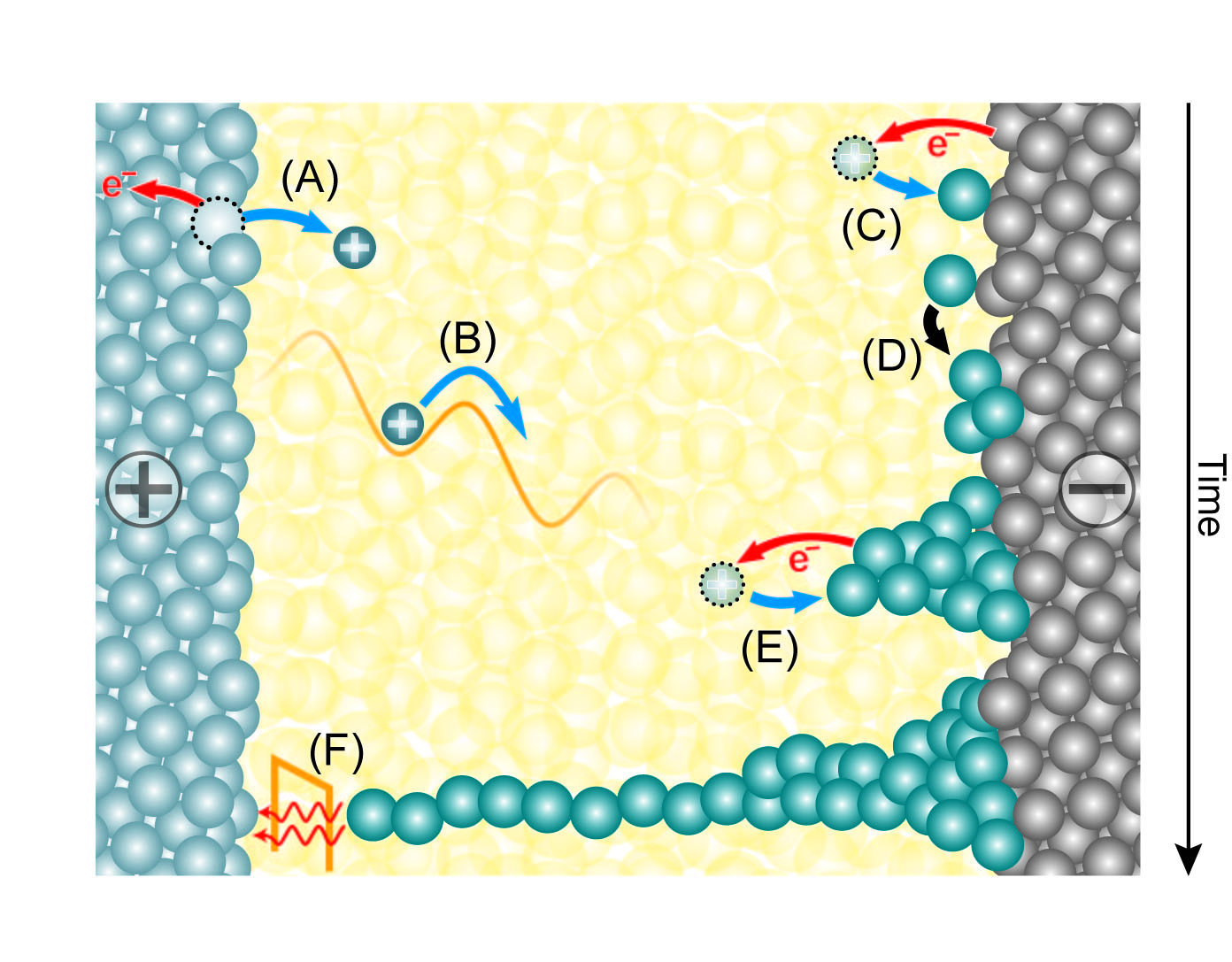