950
Advancements in Copper Interconnect Technology:  The Effect of Sulfuric Acid on the Adsorption & Desorption of an Advanced MLI Suppressor

Remington A (Hyatt Regency)
W. Olson, M. Schmidt (University of Portland), A. Wetterer (University of Portland), and M. Willey (Moses Lake Industries Inc.)
In the last five years the size of the copper plated interconnect features for the logic and memory market has dropped below 30nm.  This decrease in size has forced plating chemistries to operate on copper seed that is often times either non continuous or has morphology that requires special tuning of the additives to create the bottom up phenomenon.  In the past, the traditional path of development led to the continued optimization of the organics additives (accelerators, suppressors, levelers) to help generate the void free fill in the plated interconnects while mostly fixing the inorganic concentrations.  A new approach to additive development is to optimize the organic additives in different electrolyte concentrations.

The current set of work aims at showing how acid affects the adsorption and desorption of a new advanced MLI suppressor.  This work starts with a basic understanding of how acid affects the plating bath with no suppressor present and then expands to show how this new suppressor is affected by the acid changes.  A surface adsorption and desorption model is then hypothesized based on the electrochemical signal. 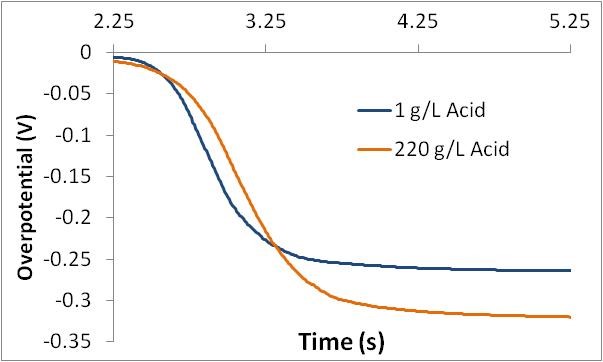