Churchill C1 (Hilton New Orleans Riverside)
M. S. Ahmed and Y. B. Kim (Chonnam National University)
Considerable effort has been focused to search for sustainable and renewable sources of green and clean energy because of the increasing demands and environmental impact of traditional energy resources, such as fossil fuels. Fuel cells (FCs) obtain significant attention as next generation energy sources because of their superior energy conversion efficiency and potential to provide clean energy. Metal-free electrocatalysts for oxygen reduction reaction (ORR) in FCs are an interesting research topic due to low cost much stable and tolerance to crossover effect than that of expensive noble metals. In this study, However, porous graphene (G) catalysts have been prepared with sp3-hybridized 1,4-diaminobutane (sp3-DABu) and sp2-hybridized 1,4-diaminobenzene (sp2-DABe) through a enhanced amidation functionalization and have employed as a metal-free electrocatalyst for oxygen reduction reaction (ORR) in alkaline media. Both compounds have used as a junction between functionalized G layers to improve electrical conductivity and impart electrocatalytic activity to the ORR resulting from the interlayer charge transfer. The successful amidation and the subsequent reduction in the process of catalyst preparation have confirmed by X-ray photoelectron spectroscopy. A hierarchical porous structure is also confirmed by surface morphological analysis. Specific surface area and thermal stability have increased after successful amidation by sp3-DABu. The G catalyst functionalized by sp3-DABu is proved as an efficient metal-free electrocatalyst with better electrocatalytic activity, stability, and tolerance to the crossover effect than the commercially available Pt/C for ORR because of the π-electron interaction-free interlayer charge transfer. 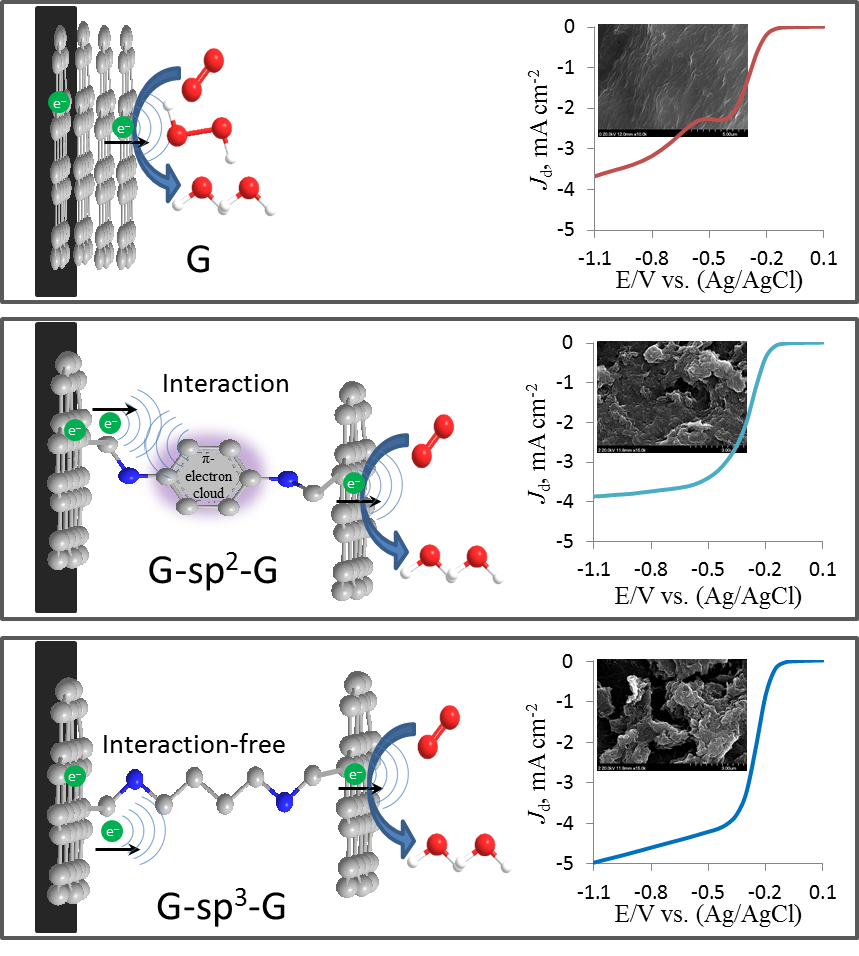