Marlborough A (Hilton New Orleans Riverside)
S. H. Vijapur, T. D. Hall, S. Snyder, M. Inman, E. J. Taylor, B. Skinn (Faraday Technology, Inc.), and C. R. Cabrera (University of Puerto Rico, Rio Piedras Campus)
Among the numerous technological advances sought in order to facilitate human space travel, solutions are needed for technology that supports energy-efficient maintenance of closed air, water, and waste systems in microgravity spacecraft habitats, like Mars. In particular, a technique for the in-situ generation of cleaning/sanitizing solutions is needed to reduce the demand of earth based materials like cleaning supplies to meet personal hygiene requirement during space missions. Therefore, if a system could be developed to use onboard utilities to create cleaning and disinfecting solutions it would reduce the astronaut’s dependence on earth based supplies.

In Faraday’s current program we are addressing this challenge by developing a system that uses on-board resources for efficient electrochemical generation of hydrogen peroxide (H2O2) for surface sanitation applications. This concept is founded on the electrochemical reduction of oxygen to H2O2 using readily available on-board supplies of O2 and water. Peroxide is an ideal disinfecting solution for closed space environments because it has non-toxic decomposition products (viz., O2 and H2O), is safe for direct skin contact at functionally active concentrations (~1-5% w/w), and has a demonstrated disinfection capability.

The goal of our initial feasibility study was to demonstrate a proof-of-concept electrochemical reactor, based on conventional fuel cell structures, that can efficiently produce H2O2 using gas diffusion electrodes (GDE)[1],[2],[3]. Specifically, the primary goals were to control product distribution (viz., exclusive production of H2O2 at the expense of H2O or H2), minimization of the energy input (by maximizing current efficiency), and maximization of the generation rate of the peroxide product. Therefore, we designed an in-situ peroxide generation system utilizing gas diffusion electrode (GDE) based electrochemical cell as illustrated in Figure 1. The cell consists of catalyzed GDE cathode[4], commercially-available mixed-metal oxide anode[5], and a cation exchange membrane separating the two electrodes. The process occurs by electrochemical reduction of oxygen to hydrogen peroxide by two electron transfer reactions which proceeds as [O2 + 2H+ + 2e- → H2O2 or O2 + 2H2O + 2e- → H2O2 + 2OH-][6].

Within this study we have: 1) evaluated various GDE structures, catalyst, and electrolytes in order to understand the effects of system parameters on performance, 2) demonstrated the potential to efficiently produce up to 3 w/w% H2O2 concentrations, 3) demonstrated H2O2 concentrations as low as 1% are sufficient for a complete kill of E. Coli bacteria, and 4) investigate the potential of an alpha-scale peroxide generation system that is compatible with available ISS architectures, systems, and utilities. In conclusion, this study indicated a process to efficient reduction of O2 to peroxide for surface cleaning and sets the stage for scale-up and evaluation in zero-gravity environments. These results will be presented at the conference.

Acknowledgements: The financial support of NASA Contract No. NNX16CA43P is acknowledged. 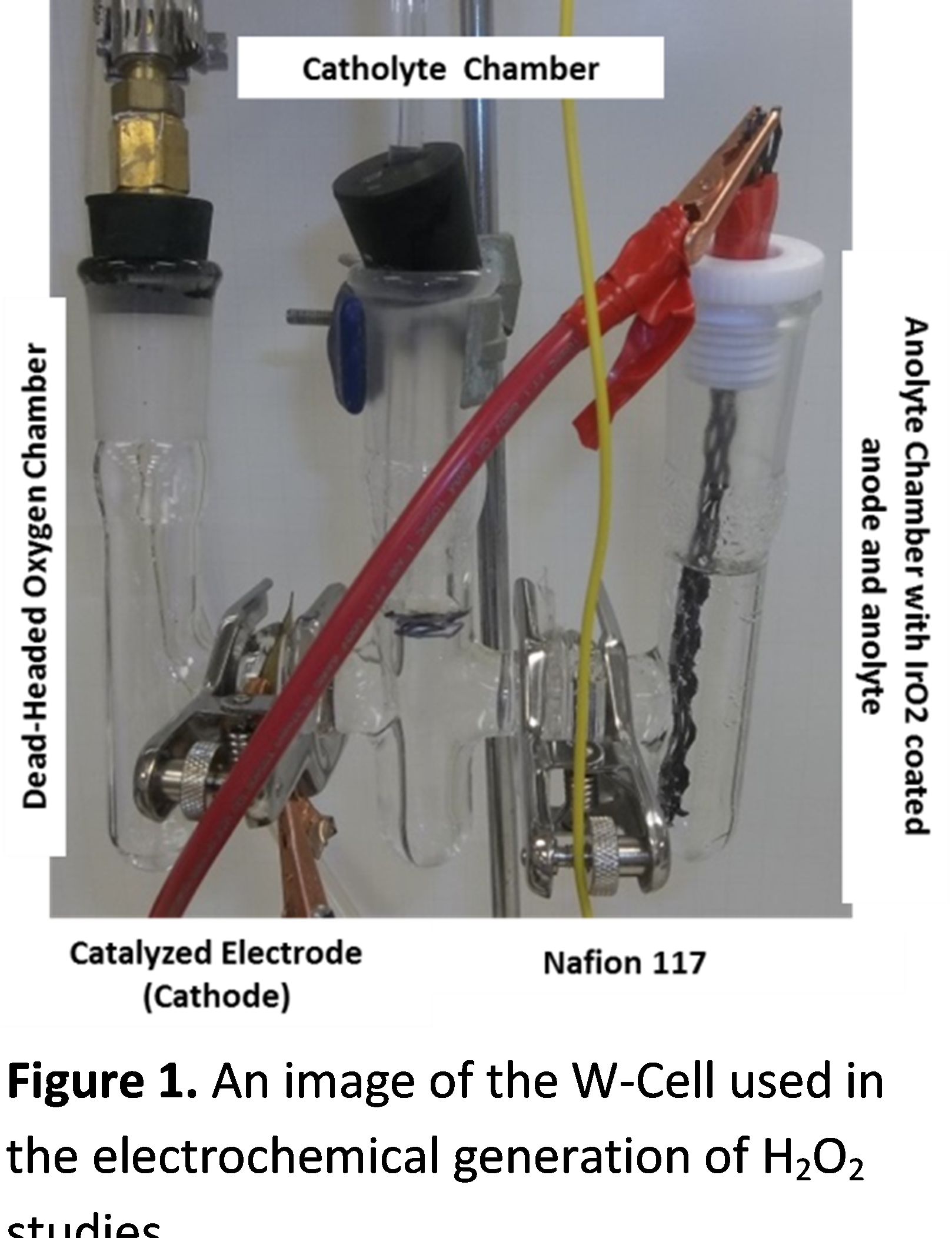