Friction Stir Welding (FSW) is a solid-state joining technique with various advantages when compared to other welding methods, being therefore a very important and promising process for the aerospace industry. This technique is particularly well suited for high-strength aluminum alloys based on the Al-Cu-Mg and Al-Zn-Cu systems, which undergo well defined precipitation hardening heat treatments and suffer loss of mechanical properties and occurrence of defects if welded by methods that involve fusion. The alloying elements and the heat treatments applied to these alloys also make them highly susceptible to localized corrosion, and thus a coating process such as anodizing becomes necessary. Considering that the existence of second phase particles and flaws in the substrate can affect the quality of the oxide coating obtained by anodizing, the influence of FSW on a subsequent anodizing process must be assessed. In this work, we studied the impact of the microstructure created by FSW on the thickness, structure, and corrosion resistance of anodic oxide coatings.

An AA7050 profile was friction stir welded to an AA2024 sheet, in order to simulate the assembly of airplane stringers and skin. During FSW, the AA7050 side was facing the welding tool, receiving intense heat and deformation. As a first approach this surface was selected for anodizing, for it is the side that is most modified. The weld was characterized by optical and scanning electron microscopy, and 3 different zones were distinguished: heat affected zone, thermomecanically affected zone (TMAZ), and the nugget (the center, where recrystallization occurs). Vickers hardness measurements revealed a lower hardness at the frontier between thermomecanically affected zone and heat affected zone, possibly due to dissolution of precipitates. The welds were galvanostatically anodized in sulfuric electrolyte. Scanning electron micrographs showed that, on the TMAZ, the anodic oxide is thicker than on the base material and the metal/oxide interface is flat. On the nugget zone, however, the anodic oxide is thinner and more defective, and the metal/oxide interface is rougher. There appears to be a relation between the presence of hardening precipitates (MgZn2 was found mostly in the nugget) and thinner anodic films. Accordingly, TMAZ was the zone with the thickest anodic oxide films, and the lowest hardness. Defects related to the dissolution of Al7Cu2Fe precipitates were found in the oxide layers on all zones and inferences about how they affect anodization kinetics are drawn.

The Scanning Vibrating Electrode Technique (SVET) was used to test the corrosion resistance of anodic oxide layers in chloride media. The samples were scanned simultaneously to anodic polarization at a potential higher than the AA7050 alloy’s pitting potential. Results showed that pitting happened preferentially on the nugget zone and its frontier with the TMAZ. Finally, pit current transients were calculated from SVET maps, allowing visualization of the evolution of pits. 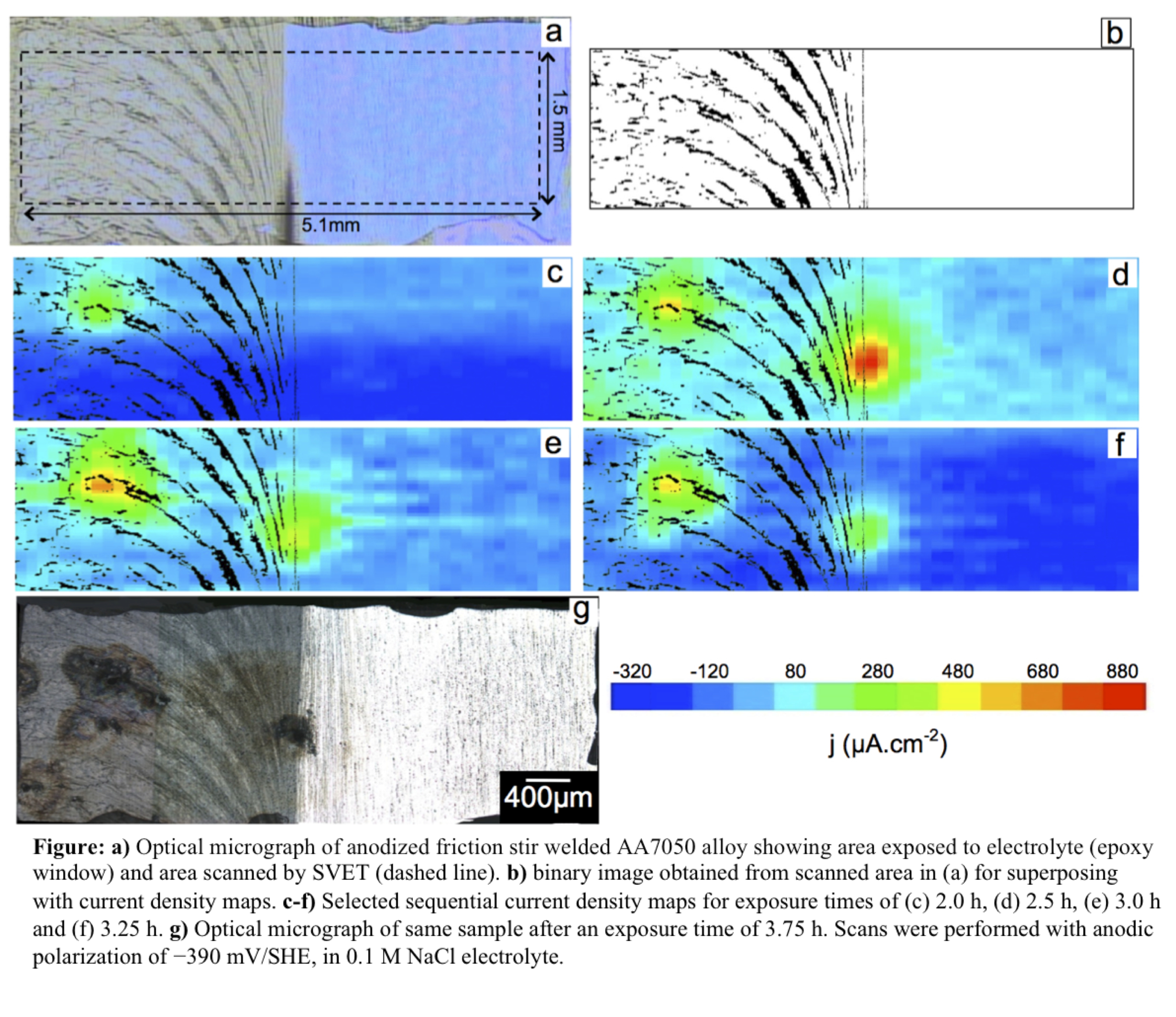