This paper tries to introduce a method to analyze and evaluate the effects of solid electrolyte conductivity on the battery linear and nonlinear behaviors. In the proposed method the measured current and voltage of the battery in frequency domain are analyzed and linear part as well as the nonlinear distortions is extracted.

In the proposed method several sinusoidal waves with same amplitude and different frequencies and also different phase realizations are added together in one signal, which is called multisine excitation. The zero signal means and overall SoC remains constant during the experiment. Furthermore charge and discharge signals can be distinguished and analyzed, separately. Thanks to frequency domain analysis, every excited waves and its response can be analyzed and also corresponding impedance can be calculated. A nonlinear system can be approximated by a linear dynamic system, which is called the best liner approximation. This linear part (linear part of battery impedance) is approximated from the voltage response to multisine excitation current in frequency domain. Besides the noise and transient, the main source of signal distortion in a measurement is nonlinear behavior of the battery which this paper tries to find the link between distortions and ionic conductivity of cathode layer.

In this paper 2 different multisine realizations with different current amplitudes at 2mA and 15mA are designed and applied to both cells at 60°C ambient temperature. Figure 1 shows the input cell current for15mA case. The signal shape suggests that it is random but if we look at it in frequency domain, it is made of specified frequencies with exact same amplitudes. The purpose of choosing these two cases is to evaluate how battery voltage and impedance are affected by ionic conductivity of cathode layer in low and high currents. The measured voltages for both cases are shown in figure 2a and 2b. As expected, the voltage amplitude is much bigger for cell 2 due to the higher impedance. However the interesting point is the voltage variation during charge and discharge, which is different for cell 2 at low and high currents. According to figure 2.a when the input current is 2mA, the voltage drop during discharge is higher than charge if the blue curve is considered as a reference. However when current has been increased to 15mA, the voltage during charge has been increased more compared with the voltage during the discharge phase. In the way that voltage variation seems more balanced than the 2mA case, which is due to the ionic conductivity reduction.

Such analysis will formulate the nonlinear effects of ionic conductivity on SSB behaviors. This method will be used for developing nonlinear models which is useful for optimized cell manufacturing process. 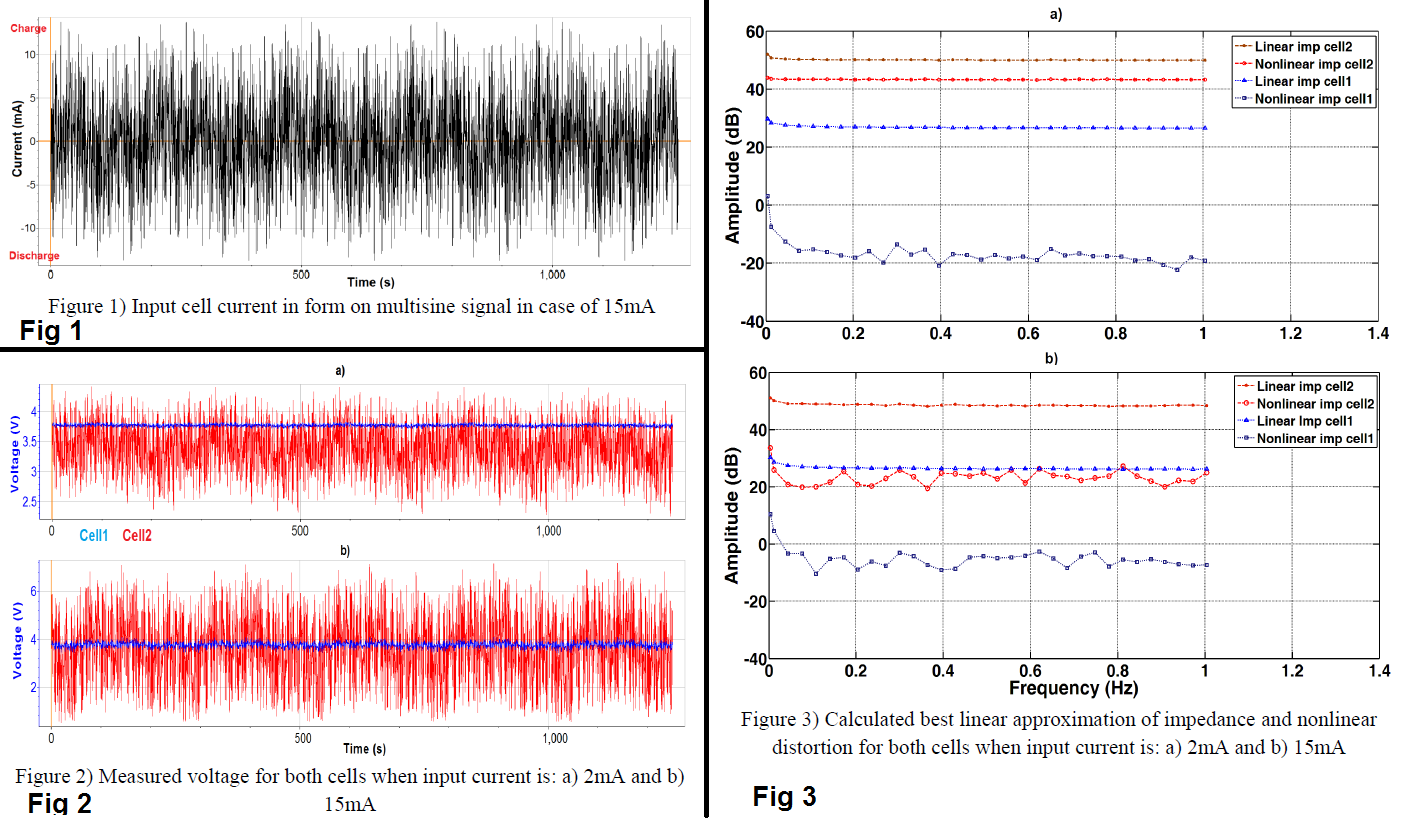