Incremental Capacity Analysis (ICA) is a method used to investigate the state-of-health (SOH) of batteries and to identify their possible aging mechanisms, by tracking the electrochemical properties of the cell1. The method is based on the differentiation of the battery capacity over the battery voltage (i.e., dQ/dV), over a full or a partial cycle, regardless the experimental conditions. Several ICA research studies have been performed on various Li-ion chemistries, and several mathematical approaches have been employed to acquire the differential curves2,3. However, all these studies are focused on cell level analysis while the influence on the whole battery pack has not been yet studied, to the best of our knowledge. Thus in the present work, we have performed an in-depth investigation of a battery pack composed of 14 Lithium-ion -60Ah cells, for the purpose of evaluating the applicability of the ICA on a battery pack level by means of different charging current rates.

Experiments were conducted with C/5 and C/10 current rates at 28oC and for a full charge (constant current – constant voltage) of the pack. In real-life, the data logged by the Battery Management System (BMS), about each individual cell from the battery pack, are not available to the user. Thus, the ICA will be applied to the battery pack voltage, which accounts also information about the impedance of the cables, the switch box, and other equipment, as well as the influence of temperature variation, while obtaining the data. For this reason, we decided to divide this work in two main parts. Firstly, the ICA is established at a pack level by directly averaging the BMS cells measured voltages, while the voltage drop due to connector, relays, fuses, etc are not included. This will be noted as ‘‘direct ICA’’. Secondly, ICA is obtained when considering the terminal voltage of the pack, i.e. at the charger terminals and will be noted as ‘‘terminal ICA’’.

A comparison between the terminal Incremental Capacity (IC) curves, obtained for two different C-rates are presented in Fig. 1. Similarly to cell level analysis, the ability of this method to detect the changes of the pack’s electrochemical properties is illustrated. The voltage plateaus which are related to the first order phase transformation are undeniably associated to the ICA peaks for both current rates. Both can yield information on the cell behavior, however a reverse proportionality of the ICA peaks is observed as the current rate is increased. Moreover a shift of the ICA curve is observed by increasing the current rates, which is directly connected to the respective shift of the capacity. The same result occurs when ICA is performed for the direct method. In Fig. 2 the direct and the terminal ICA curves are shown (divided by the number of the series connected cells) for the whole pack with the bolded blue lines respectively, for C/10. The individual cells ICA curves are also illustrated with solid lines. Along with the capacity, in both cases, the direct and terminal ICA curves follow correctly the behavior of the cells and they are in the middle of the highest and lowest cells variation, as far as their magnitudes is concerned. It is also seen that the IC of the cells are not homogenous, but are shifted both horizontally and vertically. On the contrary, the terminal IC curve is shifted on the voltage axis to higher values, signifying a resistance increase, for the same current rate. Moreover, in Fig. 3, this comparison of the direct and terminal ICs is shown with their corresponding measured capacity curves. A difference in their capacities and the corresponding ICA curves can be observed for the same current rate which is dependent on the voltage drop across the connectors, relays, fuses etc.

In this paper, ICA has been applied on a battery pack consisting of 14 series connected cells. The results show that the method is very sensitive to the level of the charging current and the location of the pack voltage measurement. The ICA has also been applied on the individual cells of the pack and non-homogenous behavior is seen. Precautions should therefore be taken when applying ICA on pack-level. 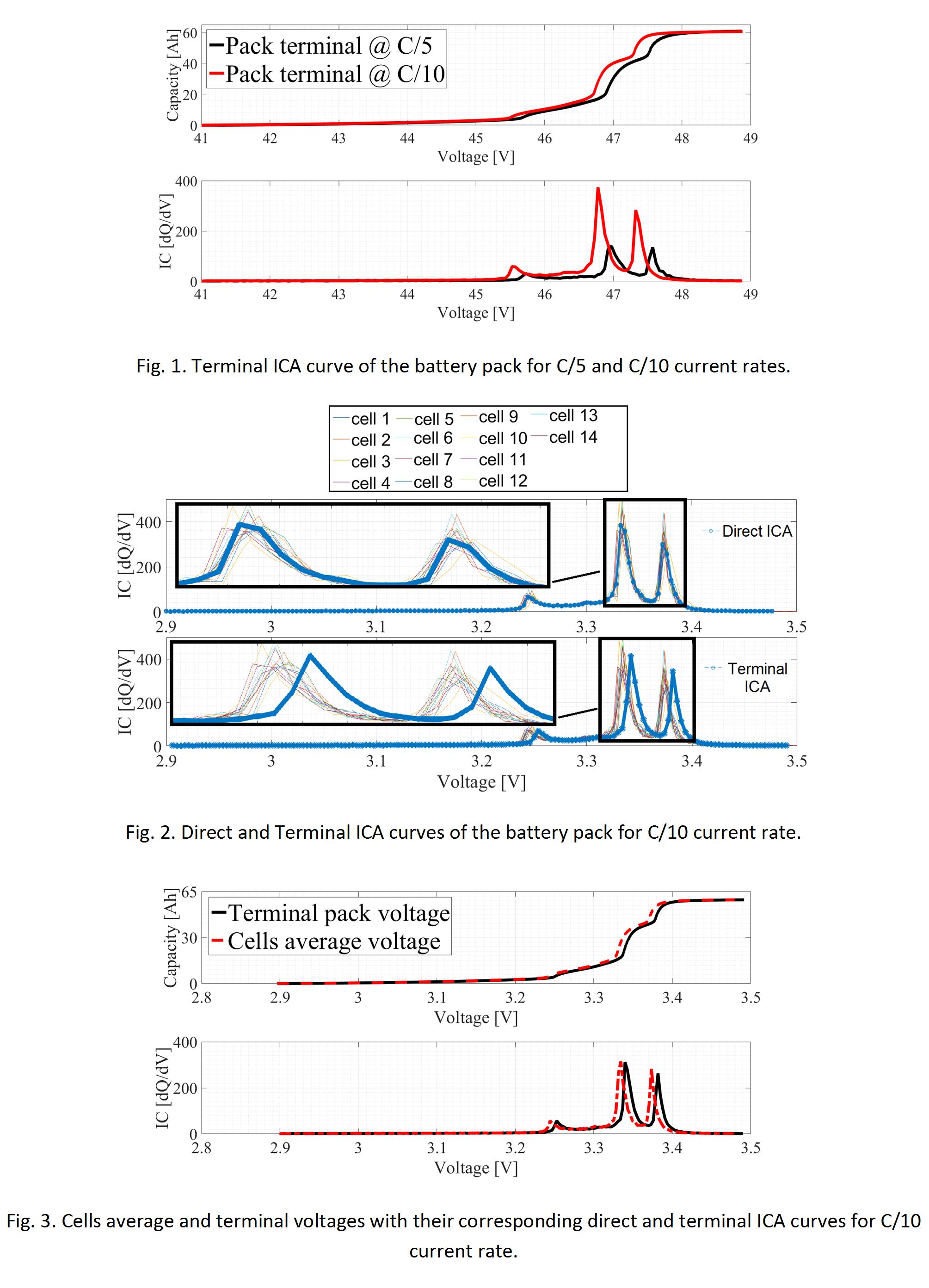