The United States government is continually committed to strengthening nuclear security and nonproliferation to reduce the threat of radioactive materials acquisition by terrorists. To meet this important mission, the US Department of Energy and National Nuclear Security Agency’s (NNSA) Office of Material Management and Minimization (M3) Reactor Conversion Program (CONVERT) seeks to minimize the use of highly enriched uranium (HEU) in civilian applications through work with governments and facilities around the world to convert research reactors to the use of non-weapons-usable low enriched uranium (LEU) fuels. Currently, the CONVERT Program is committed to development of a high-density U-Mo fuel that will be able to convert high performance research reactors, while establishing an efficient and economic fabrication capability to manufacture the fuel.

A micron scale Zr metal diffusion barrier is deposited onto bare U-10Mo (uranium-10% molybdenum alloy) monolithic metal foils by plasma spraying. Zr metal powders are heated in a high energy DC plasma and accelerated toward the foil substrate. The molten metal particle impact and deform on the substrate, to form a uniform dense coating. (Figure 1A) Multiple passes of the plasma torch increase the coating thickness layer by layer. In initial experiments, the DU-10Mo foil was significantly preheated, which promoted oxidation of the foil surface. Microscopic analysis showed a thin (100’s of nanometer) interaction layer rich in oxygen (Figure 1B).[1]

The integrity of the Zr diffusion barrier deposition is determined by tensile strength adhesion testing and destructive cross-sectional metallography and microscopy.[2, 3] Despite best efforts of ensuring a quality vacuum and oxygen free environment, trace amounts of oxygen were present in the Ar-He plasma. During the preheating passes (i.e. no metal powder), the uranium surface was slightly oxidized. During deposition, uranium and molybdenum, as well as zirconium, would diffuse into this oxide, forming the oxygen rich interaction layer. This became a point of weakness and led to a temperature dependent bond strength. Post coating annealing shows nano-scale phase segregation and reduced strength. Further experiments eliminated the preheating steps; the Zr powder was deposited onto the foil immediately, then the plasma torch was used to heat the coated foils following deposition. With this approach, there is almost no oxide formation and minimal interaction at the interface. Contrary to expectations, this minimal diffusion and interaction leads to improved tensile adhesion strength. This improved bonding strength seems to be less dependent on the deposition temperature. The effects of processing on bond adhesion strength are reported in Figure 1C.

Figure 1. A) Cross-sectioned backscattered SEM (BS-SEM) of typical U-10Mo foil with both sides coated with Zr metal via plasma spray. B) BS-SEM image detailing the interface between the Zr layer and the U-10Mo foil when the sample is preheated by plasma, prior to Zr spray. C) Relation between average substrate temperature during plasma spraying (°C) and the measured bond adhesion tensile strength (MPa). Black squares show the bond strength results of the conventional twelve preheating passes prior to Zr powder depositions. The red circle present the results of the post heating treatment at 750°C for 1 hour of these same foils. The blue square relates to the experiment with only four preheating passes before Zr powder is introduced into the plasma spray system. The green squares show the results of no preheating passes. 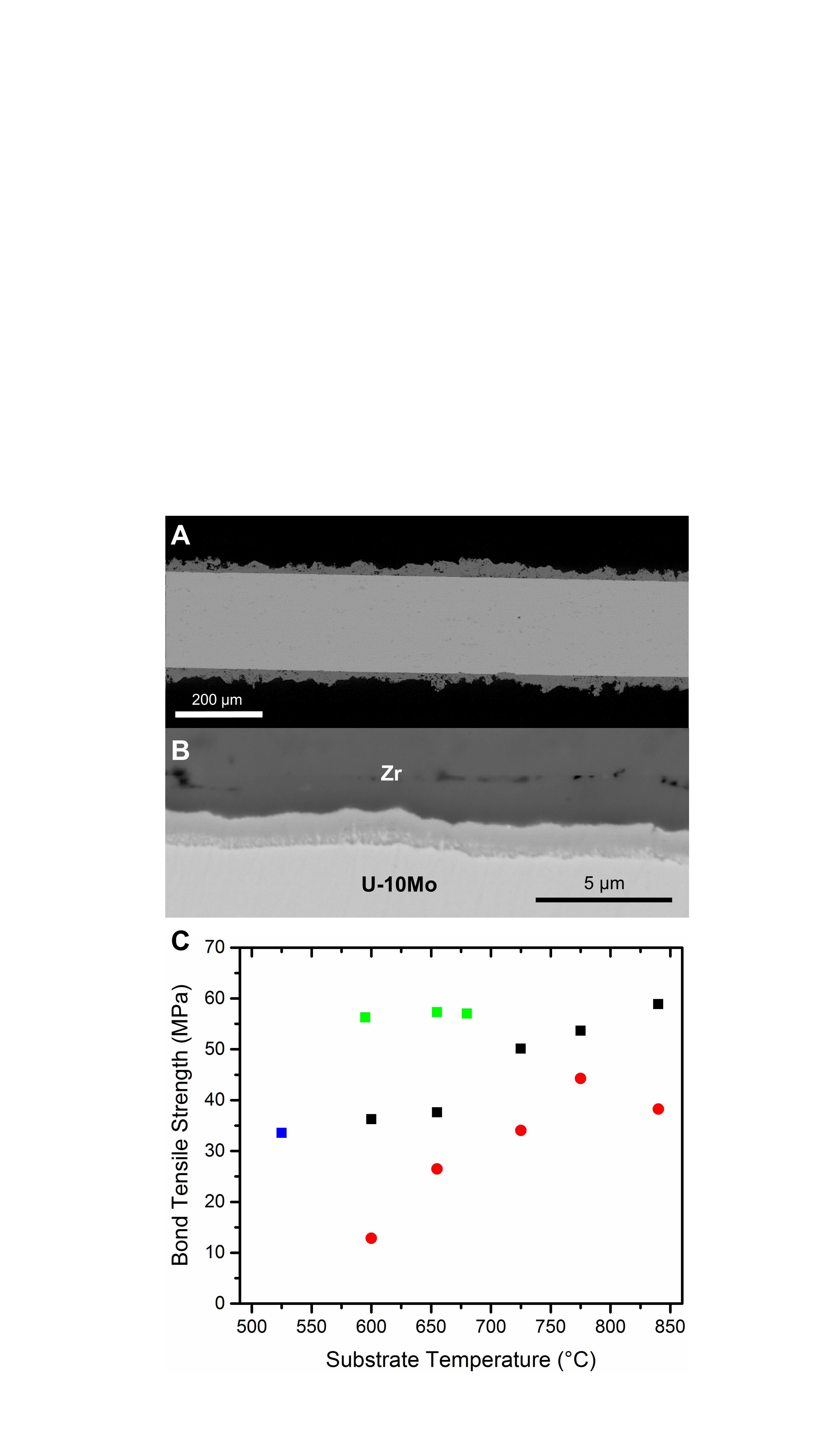