Grand Salon D - Section 22 (Hilton New Orleans Riverside)
B. Sanabria (Politecnico di Milano) and I. Aoki (Universidade de Sao Paulo)
Corrosion is one of the main concerns for using biodiesel as an alternative fuel. Nowadays, the vast majority of studies are done by immersion tests and the monitoring of its physicochemical properties during degradation reactions. The low conductivity of biodiesel and the development of high ohmic drops has restricted the use of electrochemical techniques for understanding the mechanisms involved in the corrosion processes. The addition of supporting electrolytes is often used to increase the conductivity and reduce the ohmic drop. In organic media as biodiesel, unfortunately, it is suspected that supporting electrolytes are not inert and can give misleading results.

The impedance measurements were done in a Gamry ref. 600 potentiostat/galvanostat using a two electrode cell configuration were a Pt foil was used simultaneously as counter and reference electrode (i.e. short-circuited to the corresponding inlets of the potentiostat) and the microelectrode was the working electrode. The frequency range was from 100 kHz to 5 mHz, with an amplitude of potential perturbation of 30 mV rms (with lower perturbation of potential no response is obtained).

For both types of microelectrodes, two time constants were observed, one at high frequencies and the other at low frequencies. The former corresponds to the electrolyte and the latter to interfacial phenomena between the electrolyte and the metal surface. Both hypothesis were corroborated using three different types of experiments. In the first case, another quality of biodiesel was used. Degraded biodiesel was obtained by introducing a copper foil, increasing the temperature and bubbling air during 5 days. With degraded biodiesel a reduction in the impedance at high frequencies was observed in both types of microelectrodes, as a result of the higher conductivity of the electrolyte. In the second case, an inert metal (Pt) was used as a microelectrode (single classic) and it was observed an increase in the impedance with respect to copper, due to the low activity that Pt has in biodiesel. Additionally, an array of copper with 25 microelectrodes was left in contact with degraded biodiesel during 60 h. Every 12 h the impedance was monitored and recorded. The results showed an increase in this parameter as a consequence of the growth in the corrosion layer formed on the surface of the metal in contact with the biofuel. As the corrosion layer growths the rate of the electron transfer reactions at the interface is reduced. In all cases, the second semicircle observed in Nyquist diagrams started at 0.3 – 0.1 Hz. A decrease in the phase angle at medium frequencies (1-0.1 Hz) was observed when the number of microelectrodes increased as a result of a higher kinetic for the change transfer process, due to the higher area and the interfacial character of the signal. 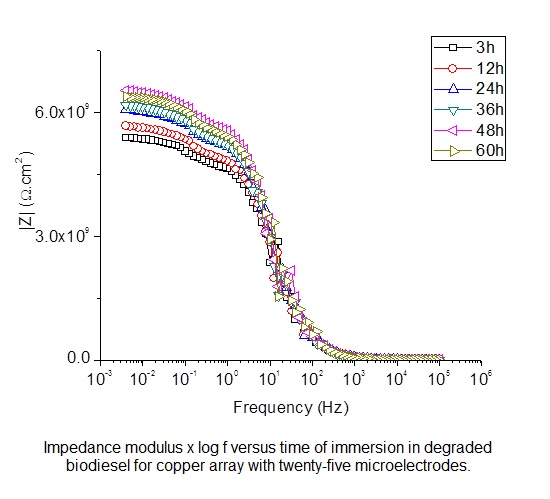