Grand Salon C - Section 13 (Hilton New Orleans Riverside)
J. Mtz. de Ilarduya (CICenergigune), L. Otaegui (CIC energiGUNE), J. M. López del Amo (CIC Energigune), M. Armand (CIC EnergiGUNE), and G. Singh (CIC energigune)
During the last years, Li-ion batteries have attracted the interest of the scientific community due to their high energy density. However, the increase of energy demand and the concern for Li supply has given a boost to alternative storage systems such as Na-ion batteries [1]. Although Na compounds are bigger, heavier and voltage is lower compared to their Li counterparts, Na resources are widely distributed in the Earth’s crust and are expected to be cheaper than Li, which makes Na-ion batteries a suitable choice for replacing Li-ion batteries for stationary applications.

One of the options for Na-ion battery cathodes are transition metal layered oxides (NaxMO2) which are named P2- and O3-type according to Delmas’s notation [2]. P2-type structures are usually sodium deficient (x < 0.71) and as a consequence of this sodium deficiency, an important reduction in the delivered capacity is expected when using non-sodium containing anode materials. In order to overcome this drawback, we present NaN3, which electrochemically decomposes in Na+ and N2, as a sacrificial salt to compensate the sodium deficiency in a hard carbon // P2-Na0.67[Fe0.5Mn0.5]O2Na-ion battery [3].

P2-Na0.67[Fe0.5Mn0.5]O2 was synthesized by solid state route using Na2CO3, Fe2O3 and Mn2O3 as precursors and NaN3 was added during the cathode slurry preparation process. In order to evaluate the effect of the NaN3 content, electrodes without and with 10, 15 and 20% of NaN3 were prepared and full cells were assembled using hard carbon as anodic component. Cells were galvanostatically cycled at 15 mA g-1cathode in the voltage range from 1 to 4.1 V using 1 M NaPF6 in ethylene carbonate: diethyl carbonate (50: 50 %wt.) as the electrolytic solution. Due to the presence of more sodium ions in the cathode, coming from the decomposition reaction of NaN3, it was observed that more Mn becomes redox active. As a consequence, first discharge capacity increased in 24%, 102% and 89%, with the addition of 10%, 15% and 20% of NaN3, respectively (Fig. 1).

Full cells were assembled with different N/P ratios. As Dugas et al. reported, cells with low ratios were anode limited and the ones with high ratios were cathode limited [4]. For high N/P ratios, a positive influence in the reversible capacity was detected because of the excess of anode active material which allows more sites for the intercalation of the sodium ions. Decreasing the N/P ratio produced a faster capacity fade being a possible cause an increment of the side reactions. Additionally, there is a risk of sodium plating on the surface of the anode with possible safety issues involved.

After 40 cycles, cathodes were structurally and morphologically characterized in the fully discharged state by SEM, XRD and solid state NMR. SEM analysis showed the effect of NaN3 on the electrode microstructure in terms of the porosity created by NaN3 decomposition. Moreover, the quantification of sodium ions by ex-situXRD and solid state NMR at the end of discharge after 40 cycles supported the electrochemical data. 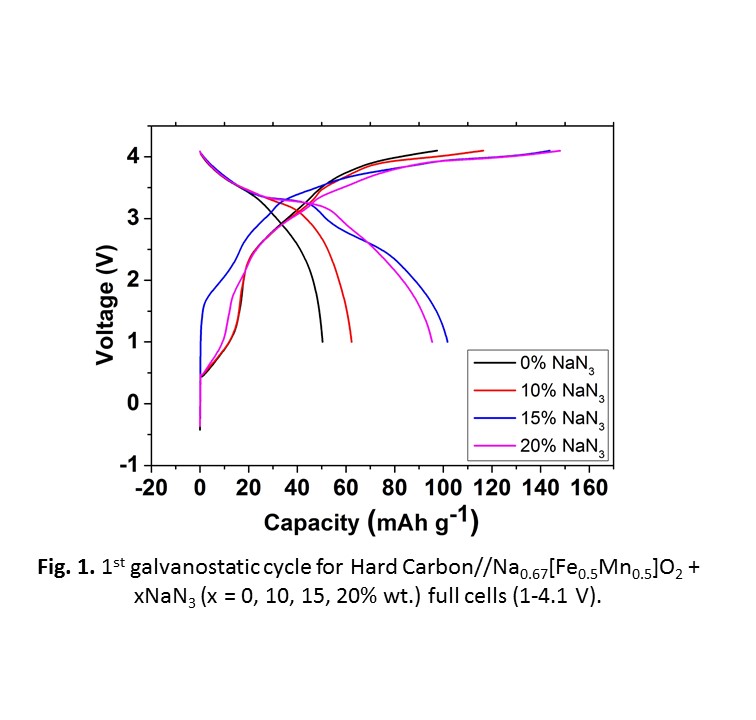