Grand Salon C - Section 15 (Hilton New Orleans Riverside)
T. Miller, R. Pavlicek, and S. Mukerjee (Northeastern University)
A non-pgm Metal Organic Framework (MOF) catalyst was evaluated for durability in the high-temperature environment associated with HT-PEMFCs under various conditions. Due to the higher PGM loading typically required for these systems, it is an ideal candidate for research regarding non-PGM catalysts. However, a common issue regarding non-PGM materials is their lack of durability in the low temperature humidified environment of a PEMFC, and until these issues are resolved, it will continue to provide a hindrance towards mass commercialization. Prior work had demonstrated the high performance of this particular catalyst[1], initially in RDE and low temperature fuel cells, and now in HT-PEMFCs. Membrane Electrode Assemblies (MEAs) were tested at 200˚C using a commercial polybenzimidazole (PBI) membrane, and were evaluated under several durability criteria, including constant voltage testing at various potentials (for demonstration of prolonged use), temperature cycling (to mimic startup/shutdown) and corrosion testing to evaluate losses in these primarily carbon-based materials. Early indications demonstrate a highly stable catalyst, as after nearly 40 hours of non-continuous chronoamperometric testing, the fuel cell demonstrated negligible performance losses at 650mV in air at 2.5bar total pressure. 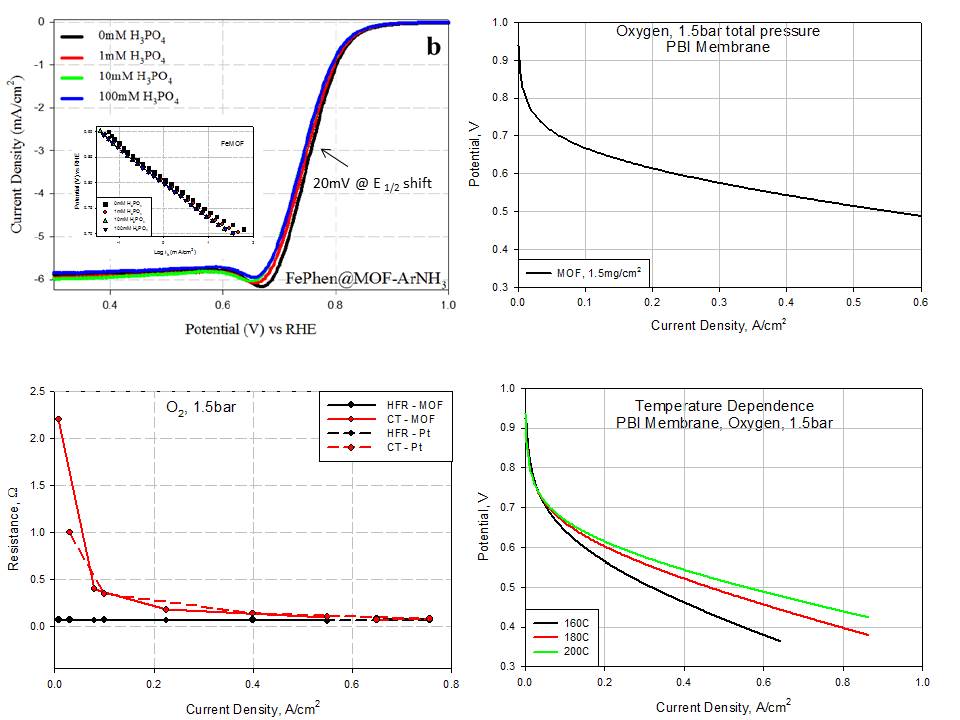