Grand Salon D - Section 24 (Hilton New Orleans Riverside)
A. Shellikeri (Florida State University), V. G. Watson, D. L. Adams (Florida A&M University), E. E. Kalu (Florida A&M University - Florida State University COE), and J. P. Zheng (Florida State University)
Lithium ion capacitors (LICs) have come to fill the gap between traditional Electric double layer capacitors (EDLCs) and Lithium ion batteries 1. But the carbon anodes, which exhibit a significant loss in their initial capacity due to consumption of Li ions in the device in forming the passivating SEI layer, have the potential to diminish this advantage, if unaddressed. Hence, one of the keys to the development of these devices is the pre-lithiation treatment which is conducted on the carbon negative electrodes. The lithiation process can be accomplished through several methods 2, including electrochemically driven lithiation, lithiation using external short in half cell configuration, lithiation by use of a back-side sacrificial lithium in combination with electrode with through holes and a separator or by direct-contact of lithium source and the negative electrode. This latter method of direct-contact is an efficient way of the lithiation since it doesn’t require any re-arrangement or any special structural needs for the electrodes.

We investigate this direct-contact lithiation process in different carbon anodes using various lithium source structures, which can have a major impact on the lithiation times and the properties of the SEI formed, further impacting the electrode processing costs. The results of this study in half-cell configuration and the performance in LIC configuration will be presented, while elaborating on the lithiation rates, efficiency and structural characteristics. Our preliminary results show that the amount and the rates of lithiation greatly vary in different anodes (graphite- Gr, hard carbon - HC, resp.), depending on the type of lithium source structures employed (4 types). Figure 1 compares the lithiation in anodes loaded with two such lithium sources (Stabilized Lithium Metal Powder – SLMP, Lithium Foil Strips - FS), during the first 24 hours duration of electrolyte soaking. The presence and absence of staging mechanism is distinctly evident in the graphite and hard carbon anodes, respectively, mainly due to different interplanar spacing in them. The different rates of lithiation is also evident from the varying amounts of remnant loaded lithium source. 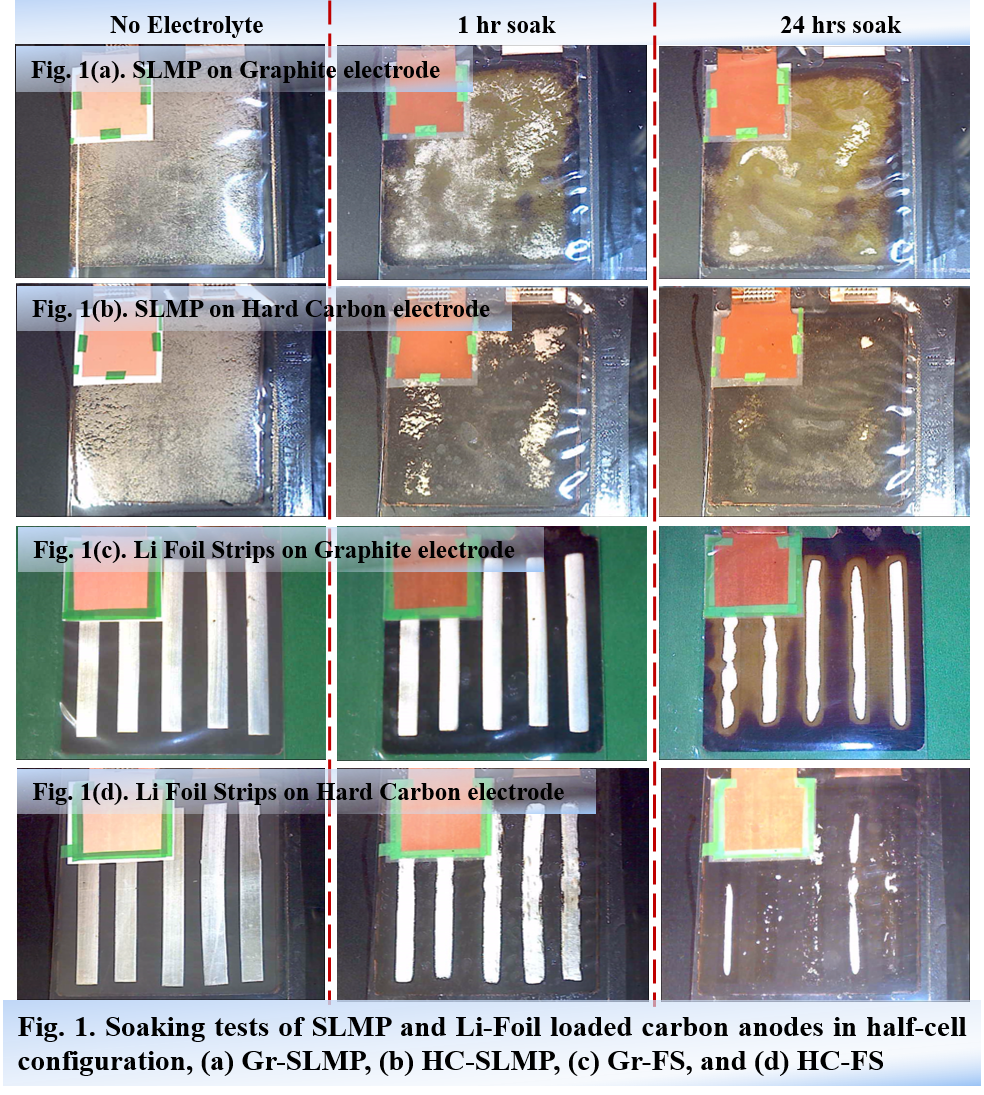