Grand Salon D - Section 24 (Hilton New Orleans Riverside)
D. Y. W. Yu, C. Y. Chan, and Z. Xu (City University of Hong Kong)
Energy density of batteries can be increased by raising the working potential of the cathode. High-voltage cathode materials such as LiNi0.5Mn1.5O4, LiCoPO4 that are based on lithium intercalation have been widely studied for lithium-ion batteries (LIB), but these materials contain transition metals that are not environmental friendly. Carbon, in the form of graphite, can also be used as cathode material in LIB because the graphitic layer can accommodate anions such as PF6- with a potential above 4.5V vs. Li/Li+. This has given rise to the idea of a dual-carbon battery where both the cations and anions are inserted into respective electrodes during charge, and released back into the electrolyte during discharge. Since the cathode has a high voltage, electrolyte decomposition is a prime concern. In addition, the concentration of the salt in the electrolyte will change during charge and discharge, and will affect the performance of the cell. A few studies have shown the performances of PF6-intercalation into graphite with different materials and electrolytes, but the stability of the electrode, especially at high voltage, remains an issue [1-3].

In this study, we investigate the effects of different factors such as particle size, voltage range, salt content, binder type etc. on PF6- intercalation into graphite. In particularly, we focus on methods to increase capacity, stability and rate performance of the electrode. Graphite from Sigma Aldrich, MTI and KS6 were used for the experiments. The powder is coated with acetylene black and binder (polyvinylidene fluoride (PVdF) or carboxymethyl cellulose (CMC)) on Al current collectors. The electrodes are dried on a hot plate at 80°C. They are further cut into 16 mm diameter circular discs, roll-pressed and dried at 110°C for 4 hours in vacuum before transferring into an Ar-filled glove box. The electrodes are then assembled into 2032-type coin cells with glass fiber separator and Li metal as the counter electrode. Lithium hexafluorophosphate (LiPF6) in fluorinated ethylene carbonate (FEC) and diethyl carbonate (DEC) with a 1:1 volume ratio is used as the typical electrolyte. To study the effect of salt concentration on the electrochemical performance of graphite, electrolytes with 1M to 3M LiPF6 are prepared and tested. The typical current rate used in the tests is 10 mAh g-1.

Figure 1 compares the 1st charge-discharge curves of different graphite electrodes with 1M LiPF6 in FEC/DEC electrolyte. Intercalation of PF6- into graphite starts at around 4.5V, similar to that reported in the literature. We observed the reversible capacity increases with surface area of the graphite – KS6 with a BET surface area of about 20 m2 g-1 gives higher capacity than Sigma (9 m2 g-1) and MTI (4.5 m2 g-1). However, cycle performance is worse. Addition of acetylene black into the electrode and reducing charge cut-off potential to 5.1V leads to better cycle stability.

Rate performance is improved with the use of CMC binder and also electrolyte with higher concentration. Figure 2 shows the charge and discharge curves of the KS6 electrode at different current rates. A small polarization is observed, suggesting fast transport of PF6- into graphite. Even at a current rate of 500 mA g-1 (about 5C), the capacity is about 90% of that at 10 mA g-1(Figure 3). This shows that the battery system is suitable for high power applications. Even after 200 cycles at 5C, the capacity can still be maintained with small amount of fading. Though, electrolyte decomposition still remains an issue in these materials. More work on improving the coulombic efficiency of the electrode is underway and the results will be shown during the presentation. 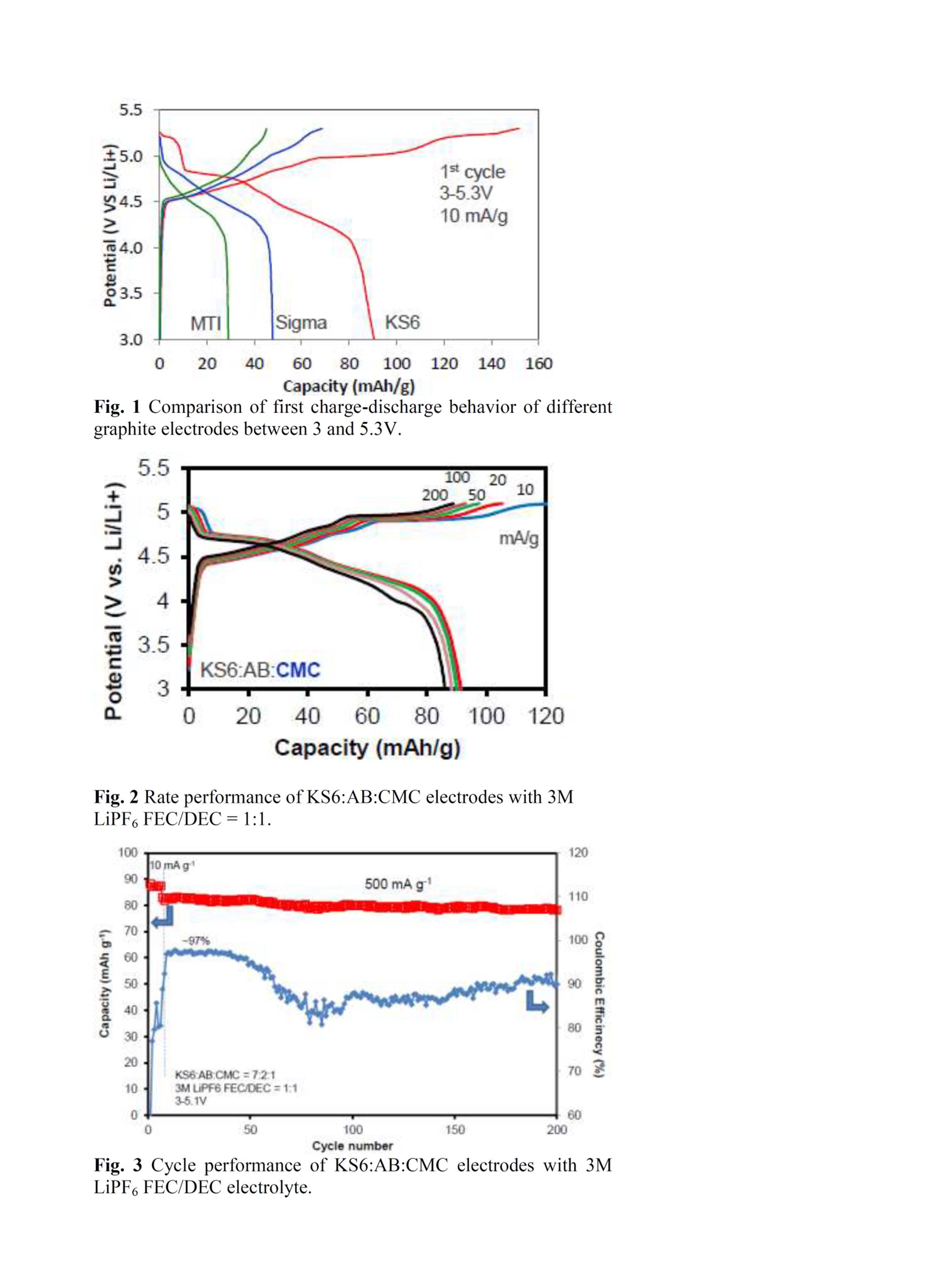