Grand Salon D - Section 24 (Hilton New Orleans Riverside)
I. Aldous, F. Braga, and L. J. Hardwick (University of Liverpool)
Non-aqueous alkali metal oxygen batteries are a family of emerging opportunities for enhanced energy storage.1 Ideally the cathodic reactant (oxygen) is provided from the atmosphere and electrochemically reduced in the presence of alkali metal cations to form reduced oxygen species (ROS) such as peroxides and superoxides. On charge the formed ROS are then electroxidised and the oxygen returned to the atmosphere and alkali metal cations reduced at the alkali metal anode to form alkali metal (Li, Na, and K). The electrons used to complete these redox reactions are provided through an external circuit connecting the two electrodes and can be used to do work, i.e. power a phone or electric vehicle. Recently capacity of these systems has been enhanced through promoting a solution based reaction mechanism, i.e. enhancing the solubility of initially formed ROS that are removed from the cathodic interface and nucleate as large crystal features on the surface. Combining electrochemistry and spectroscopy has provided an understanding of how to control this mechanism through solvation of O2-, LiO2, and NaO2 via enhanced electrolyte Gutmann donor numbers (solvent and anion). 2-4 Additives such as water5, and halides6, 7 also enhance the formation of these enlarged toroids of Li2O2 and cubic crystals of NaO2 and KO2.

Controlling the growth of these discharge products, at the oxygen cathode interface, is imperative to realising the theoretical capacity of this family of energy storage devices. The enhanced discharge capacity causes decreased charging kinetics, and blocking of pores within the cathode. By employing in situ electrochemical atomic force microscopy (AFM), specific conclusions of how and where the nucleation of these products can be ascertained. Already two differing models have been presented in the literature on the formation of Li2O2 on gold and highly ordered pyrolytic graphite (HOPG) cathodes. Wen et al8 concluded that nanoparticles of Li2O2 initially form at step edge, or defect, sites on HOPG and subsequent formation of Li2O2 plates then occur. Liu et al9 have recently presented a different model whereby no nanoplate formation is seen and only toroidal features are observed later in the discharge reaction.

This talk will focus on the group’s research and findings on how Li2O2, NaO2, and KO2, at a HOPG cathode, initially form and subsequently nucleate at cathodic interfaces. Discussion will touch upon how the electrochemistry can be related to electrode substrate and electrolyte composition. This will be presented with in situ Raman spectroscopic studies that identify intermediate and surface species during the oxygen reduction reaction. 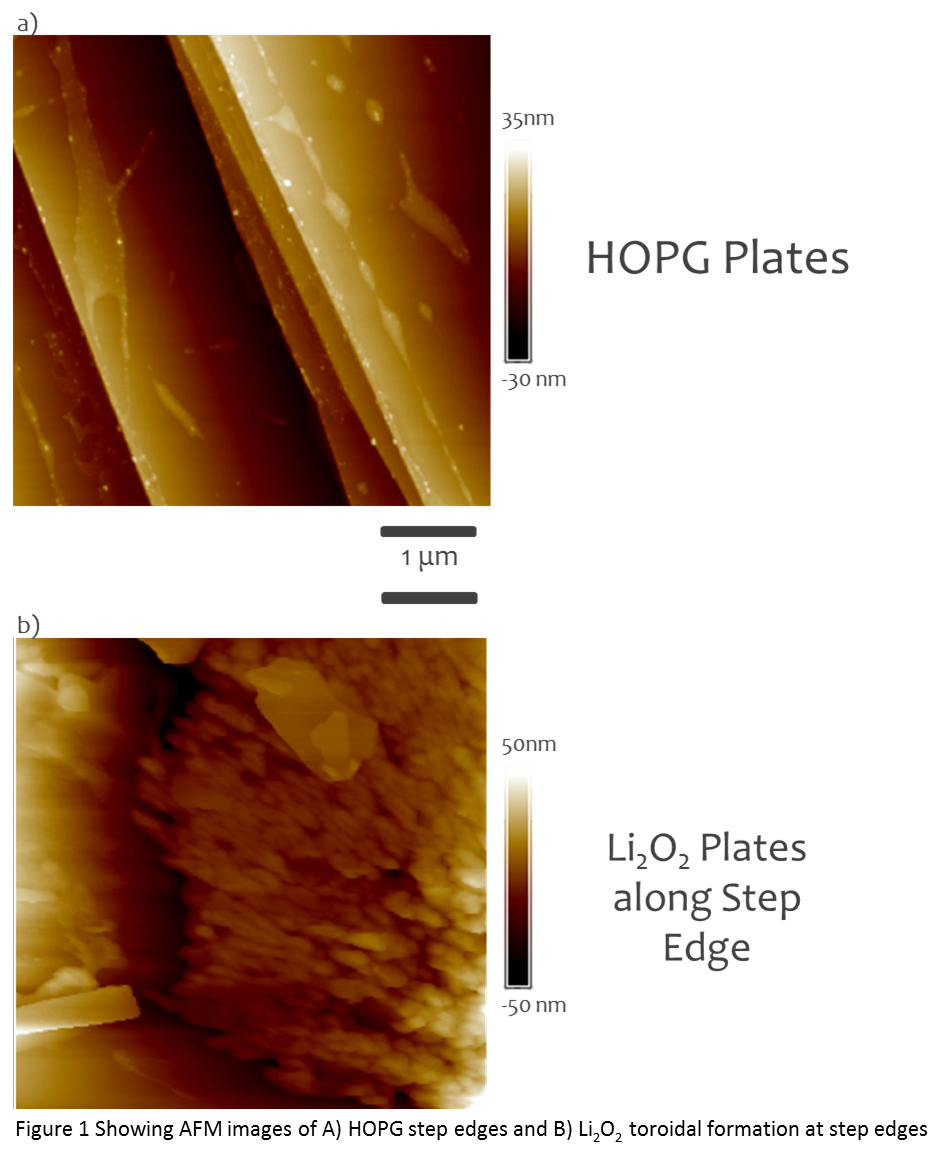