Norwich (Hilton New Orleans Riverside)
N. Acet and D. Eroglu (Middle East Technical University)
Due to their high hardness, anti-corrosion and anti-wear properties, Nickel/ceramic particle composites have gained significant attention as environmentally-friendly alternatives to chromium and cadmium based coatings typically used in the aerospace industry [1-3]. Electrodeposition of these Ni/ceramic particle composites has the advantage of lower operating cost and operating temperature than the conventional production methods [1-3]. Electrodeposition of Ni/TiC nanocomposites for these wear-resistant coatings is a commonly investigated example [2, 3]. Incorporation of nanoparticles into the deposit has a significant effect on the tribological and mechanical properties of the composites [1, 3]. Previous studies show that high and uniform particle incorporation into the deposit depends greatly on the dispersion of these ceramic particles in the electrolyte [1, 2]. Therefore to get superior properties, the agglomeration of the nanoparticles in the electrolyte should be decreased and the nanoparticle incorporation into the deposit should be increased [1]. However, a major challenge in this regard is that the dispersants that are used to stabilize the particles in the electrolyte can significantly affect the electrodeposition kinetics.

Firstly, in order to determine the effect of PEI on the stability of TiC nanoparticles in the electrolyte, zeta potentials of the particles are measured in 0.01 M NaCl solution at a pH of 4.4 for different PEI:TiC bath concentration ratios. It has seen that PEI is highly effective in enhancing the dispersion of TiC nanoparticles even at low concentrations; zeta potential of TiC particles increased from 19.6 to 40.6 mV with the addition of 50 ppm PEI. Secondly, the effect of PEI bath concentration on the Ni/TiC electrodeposition kinetics was investigated using linear sweep voltammetry as shown in Figure 1. It can be seen that the addition of PEI at concentrations of 125 ppm and lower does not create any significant inhibition except at low current densities. The shift in the potentials seen for a PEI concentration of 250 ppm may be interpreted as the adsorption of the polymer onto the electrode inhibiting the active sites for charge transfer. In order to further quantify the effect of PEI on electrodeposition kinetics, current efficiencies were measured for PEI concentrations of 0, 50, 125 and 250 ppm at a current density of 50 mA cm-2and determined as 97.0%, 97.5%, 96.2% and 58.5%, respectively. It can be concluded that PEI addition up to 125 ppm improves the particle dispersion significantly without inhibiting the electrodeposition. Finally, the effect of PEI on the amount and uniformity of TiC nanoparticles in the composite is analyzed by SEM/EDS. Backscattered SEM images show that the addition of PEI leads to more uniform particle incorporation into the deposit. In addition, volume fraction of TiC in the nanocomposite increased from 0.3% to 3.2% with the addition of 125 ppm PEI. Further enhancement on the incorporation rate will be done by the optimization of other critical parameters such as the particle bath concentration, current density and rotation speed.

This study is funded by The Scientific and Technological Research Council of Turkey (TUBITAK Project No: 116C005). 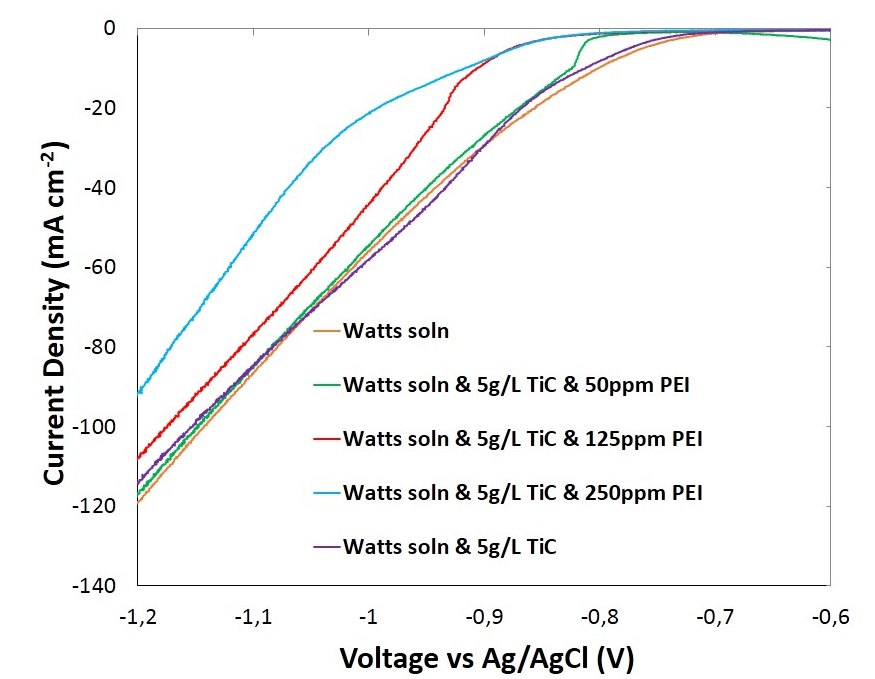