Grand Ballroom (Hilton New Orleans Riverside)
N. Erisen and D. Eroglu (Middle East Technical University)
Lithium-Sulfur (Li-S) batteries are one of the most promising energy storage systems beyond Li-ion batteries because of the high specific capacity (1675 mAh/g), low cost, natural abundance and non-toxicity of sulfur [1-3]. Although Li-S batteries have many attractive characteristics, they are facing major problems that are required to be solved to improve the cycle life and capacity retention; the precipitation of the insulating solids on the cathode (S, Li2S), infinite charging due to the polysulfide shuttle mechanism and the instability of the lithium anode [1-3]. Carbon to sulfur ratio in the cathode is one of the most critical design parameters in a Li-S battery [1-3]. Because of the insulating nature of both S and Li2S, Li-S cathodes typically require high C:S ratios [1-3]. As this ratio increases, cathode kinetics are improved due to an enhancement in both electronic conductivity and active surface area. However, techno-economic model predictions in a previous study show that too much increase in the C:S ratio results in a significant decrease at the system-level energy density [1]. Therefore, thoughtful selection of the C:S ratio in the cathode is critical to achieve high-energy density Li-S batteries.

In this study, the effect of carbon to sulfur ratio in the cathode on the electrochemical performance of a Li-S cell is modeled. For this purpose, a one-dimensional, concentration-independent electrochemical model for an isothermal, constant-current discharge of a Li-S cell is developed based on a previous model [1, 4]. In the model, the current-voltage relationship is predicted using Butler-Volmer kinetics in the anode, Ohm’s Law in the porous separator and the porous electrode model by Newman and Tobias in the cathode [5]. The effect of C:S ratio in the cathode on the electrochemical performance is investigated at 60% depth of discharge by feeding the model with the experimental cell design parameters from the literature (i.e. carbon to sulfur ratio and electrolyte to sulfur ratio in the cathode, anode, separator and cathode thicknesses and current density in references [2, 3]). Consequently, cell voltage at 60% DOD for different C:S ratios are predicted by the model proposed and compared with the experimental data.

Cell voltage at 60% DOD predicted by the model as a function of C:S ratio for two different current densities is shown in Figure 1. It can be seen that the cell voltage increases significantly with increasing C:S ratio, especially up to a C:S ratio of 1. Further increase in the carbon content leads to a less apparent increase in the cell voltage for both current densities. This may suggest that the cell is limited by the kinetics at C:S ratios lower than 1 whereas the improvement on the cathode kinetics is less significant at higher ratios. The model predictions are also validated with the experimental data [2] as shown in the figure. It is clear that the model predictions show close agreement with the experimental data.

Figure 1. The effect of C:S ratio in the cathode on the cell voltage at 60% DOD predicted by the model for two different Li-S cell designs [2, 3]. The comparison of the model predictions with the experimental data [2] is also presented. 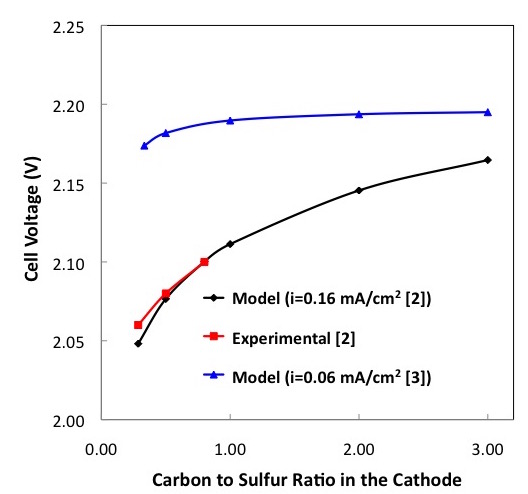