All chemicals were purchased from BASF. LiPF6 in EC/DEC (w/w 50:50) of different concentrations (1.5M to 0.1M) were prepared inside an argon-filled glove box and sealed in aluminum bottles before the PFG-NMR measurement.5

Diffusion coefficients (D) of the Li+, PF6- , and EC/DEC were measured by 7Li 19F and 1H PFG stimulated echo NMR spectroscopy. Since resonances from EC, DEC are separated in one-dimensional 1H spectra, separate diffusion coefficients could be measured. Experiments were performed at Larmor frequencies of 599.82 and 564.3 MHz for 1H and 19F, respectively, over the temperature range of 0 to 40 oC using a 14.1 T (600 MHz 1H) NMR spectrometer (Agilent) equipped with a 5 mm z-gradient probe (Doty Scientific), which can generate a maximum gradient strength of approximately 31 T/m. The echo heights, S(g), recorded as a function of gradient strength, g, were fitted with the Stejskal-Tanner equation (equation 1),

Shown in Figure 1 is the concentration dependence of self-diffusivity of LIPF6/EC/DEC measured by PFG-NMR for Li+, PF6-, EC and DEC. Careful inspection of the data leads to several conclusions below:

I. the self-diffusivities of all species decrease as the concentration increases or the temperature decreases, which is expected from the Stokes-Einstein equation

III. the concentration dependence of self-diffusivity for PF6-is stronger than other species, especially at lower concentrations, e.g. 0.1 M to 1.0 M, while Li+ shows the weakest dependence.

The generalized-Darken relation (Equation 1) for translating self-diffusivities and of species i and j into binary diffusivities, Dij, is given by equation (2):

where xi, xj, are component mole fractions. This relation was validated by Krishna and van Baten4. The resulting Fickian diffusivity values decrease as the concentration increases in a narrow range (3.7x10-10 to 2.4x10-10m2/s), and have similar magnitudes to these reported in EC/DEC or PC/EC/DMC as measured by electrochemical methods over a wide range of concentrations. Lundgren et al. 6 reported that the Fickian diffusivities of LiPF6 in the same electrolyte decreased from 2.8x10-10 m2/s to 2.0x10-10 m2/s in the range of 0.5M to 1.5M, as measured by galvanostatic polarization experiments (red connected points, Figure 2); Valøen and Reimers 7 measured the Fickian diffusion coefficients of LiPF6in a PC/EC/DMC mixture (10:27:63) (blue connected points, Figure 2). 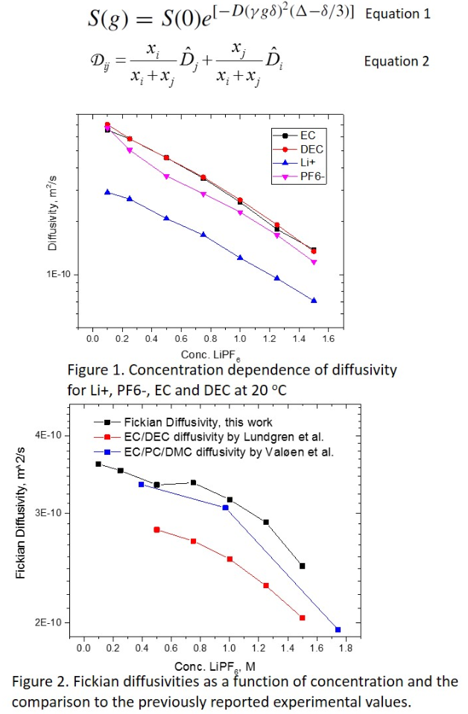