Prince of Wales (Hilton New Orleans Riverside)
J. Akrasi (Florida State University), E. E. Kalu (Florida A&M University - Florida State University COE), and Y. D. Yeboah (Florida State University)
The electrochemical oxidation of glycerol has been studied and known to be a source of several chemicals of premium industrial value and has also been utilized in the concept of direct glycerol fuel cells to produce electrical energy additionally[1]. In the current study however, this concept is extended to cover both electrochemical oxidation and reduction of glycerol as a substitute for the hydrogen ion in redox flow battery with a Fe2+/Fe3+ couple as cathode [2]. A predictive thermodynamic analysis has been developed and applied to the study and proof of this conceptual glycerol redox flow battery. Reactions toward electrochemical formation of several partial oxidation and reduction products of glycerol in acidic media under discharge and charging conditions of the proposed glycerol flow battery are presented. Free energy values of the reaction species as estimated by the Group Additivity Value (GAV) method were used to determine the feasibility of these proposed reaction towards cogeneration of electricity and commodity chemicals. The equilibrium voltages representing the maximum electrical work under these conditions are also computed. Experimental validation of this theoretical concept has also been investigated using electrochemical methods to study the electro-catalytic activity of electrolessly deposited NiCuSnP supported on carbon towards glycerol oxidation in acidic medium as anode in a proton exchange membrane-glycerol redox flow battery. 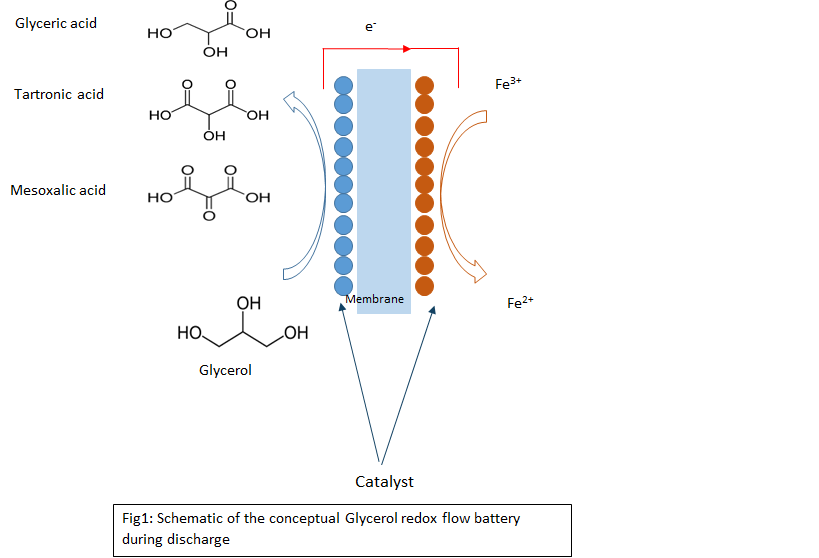