Grand Salon D - Section 22 (Hilton New Orleans Riverside)
A. Kahyarian (Institute for Corrosion and Multiphase Flow Technology) and S. Nesic (Ohio University)
The effect of acetic acid on the internal corrosion of pipeline steel have been studied by numerous researchers1. It is commonly believed that acetic acid is an additional corrosive species which is directly reduced at the metal surface, hence, provides the electron sink required for iron dissolution reaction to progress faster. This idea is stemming from an analogy to CO2 corrosion where carbonic acid, the hydrated form of CO2, has been conventionally considered to be electrochemically active. However, depending on the environmental conditions, inconsistent trends for the effect of acetic acid on observed corrosion rates were reported1.

The vast majority of the previous studies investigate the effect of acetic acid together with CO2 corrosion. However, the complexity of the water chemistry associated with CO2 corrosion and the additional twist by introducing acetic acid makes any mechanistic discussions difficult in such systems. The present study is a systematic investigation of acetic acid effect on aqueous corrosion of mild steel. The polarization behavior of acidic solutions at various acetic acid concentrations were used to discuss the underlying mechanism of the corrosion process. It was hypothesized that if acetic acid is not an electroactive species, the purely charge transfer controlled cathodic currents should not increase by increasing acetic acid concentrations2.

The polarization behavior of the system was further quantified by a comprehensive mathematical model3. The model was developed by solving the Nernst-Plank equation through the diffusion layer using newsman’s “BAND” algorithm, which accounts for molecular diffusion, electro-migration, convective flow, homogeneous reactions as well as the two electrochemical reaction, iron dissolution and hydrogen ion reduction at the metal surface. The inhibitive effect of acetic acid was shown to correlate with a Temkin type adsorption isotherm for acetic acid, with a good approximation. A reasonable agreement with the experimental voltammograms were obtained, confirming that acetic acid is not a significant electro-active species in the conditions considered in the present study. The experimental corrosion rates obtained using linear polarization resistance measurements at temperatures from 30 to 50 oC, rotation rates from 125 to 2000 rpm, pH from 3 to 5 and acetic acid concentrations from 0 to 1000 ppm were compared with the values predicted by the model as shown in Figure below, where a reasonable agreement were found.

The inconsistent reports of the effect of acetic acid on the observed corrosion rates may therefore be explained by considering these two opposing effects:

- Acetic acid increases the limiting current by buffering the surface concentration of hydrogen ions, therefore increasing its concentration would increase the corrosion current linearly, if it is under mass transfer control.

- Acetic acid inhibits the charge transfer rates of both cathodic and anodic reactions, therefore increasing its concentration would decrease the corrosion current, if it is under charge transfer control. 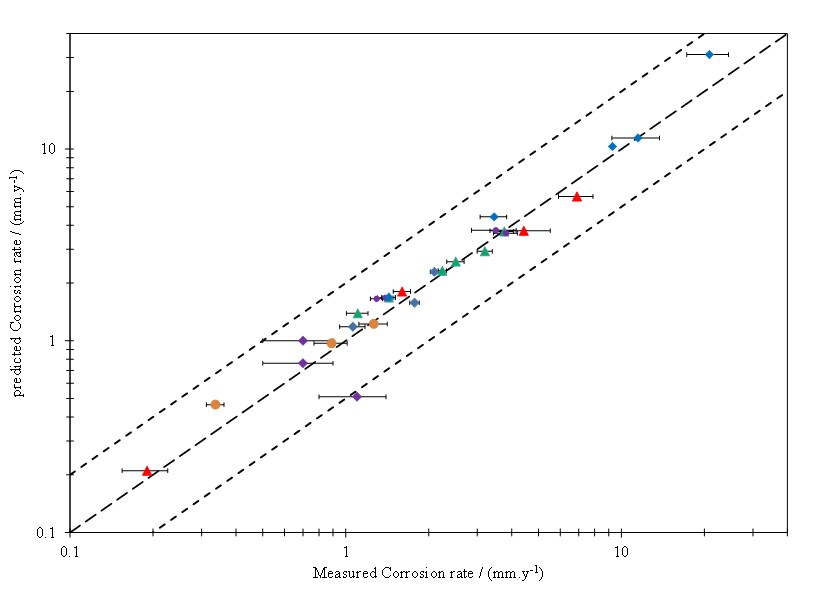