Grand Ballroom (Hilton New Orleans Riverside)
C. Reale Hernandez (INRS-EMT), Z. Karkar (INRS-EMT; CNRS-IMN), A. Tranchot (INRS-EMT), A. Etiemble, E. Maire (Laboratoire MATEIS, INSA-Lyon), D. Guyomard, B. Lestriez (IMN, CNRS/University of Nantes), and L. Roué (INRS-EMT)
Over the last ten years, considerable efforts have been devoted to solve the problem of the low cycle life of Si-based electrodes for Li-ion batteries. This mainly originates from the huge volume variation (up to ~300%) of silicon during its lithiation/delithiation, which induces a rupture of the electrode conductive network and an instability of the solid electrolyte interphase (SEI). The use of nanosized Si materials (nanoparticles, nanowires, thin films…) able to better accommodate large strain without extensive electrode cracking has been successively developed for improving the Si electrode cycling stability. However, in most of these studies, the active mass loading is low, resulting in a low areal capacity, typically less than 1 mAh cm-². This is much lower than that of commercial graphite-based negative electrodes, which can reach up to 5 mAh cm-². Obtaining stable Si-based electrodes with high areal capacities is very challenging as the increase of the Si areal mass loading accentuates the mechanical strain generated by the Si volume change1.

We have recently shown that the storing of a Si/C/CMC electrode in humid atmosphere for a few days before drying and cell assembling has a very positive impact on its cycling performance2. With such a ‘’maturated’’ electrode, an areal capacity higher than 4 mAh cm-2 can be achieved for more than 100 cycles compared to less than 3 cycles for a no matured electrode. The precise mechanism of this maturation process is still unclear

Here, the impact of the maturation step on the mechanical properties of Si/C/CMC electrodes is investigated by means of indentation, peeling and scratch tests. They confirm the higher adhesion and cohesion strengths of the maturated electrode. Its more reversible expansion/contraction behavior upon cycling is also demonstrated from electrochemical dilatometry measurements and in-operando optical microscopy observations (Fig. 1). In addition, focused ion beam scanning electron microscopy (FIB-SEM) tomography shows a better preservation of the pore and Si particle connectivities with cycling for the matured electrode. Lastly, reflectance Fourier transform infrared spectroscopy (ATR-FTIR) complemented by Nuclear Magnetic Resonance (NMR) analyses indicate that the nature and distribution of the Si-CMC bonds are modified by the maturation step. On the basis of these different analyses, a film maturation mechanism is proposed, which opens up new avenues for optimizing the manufacture process of high-performance Si-based electrodes. 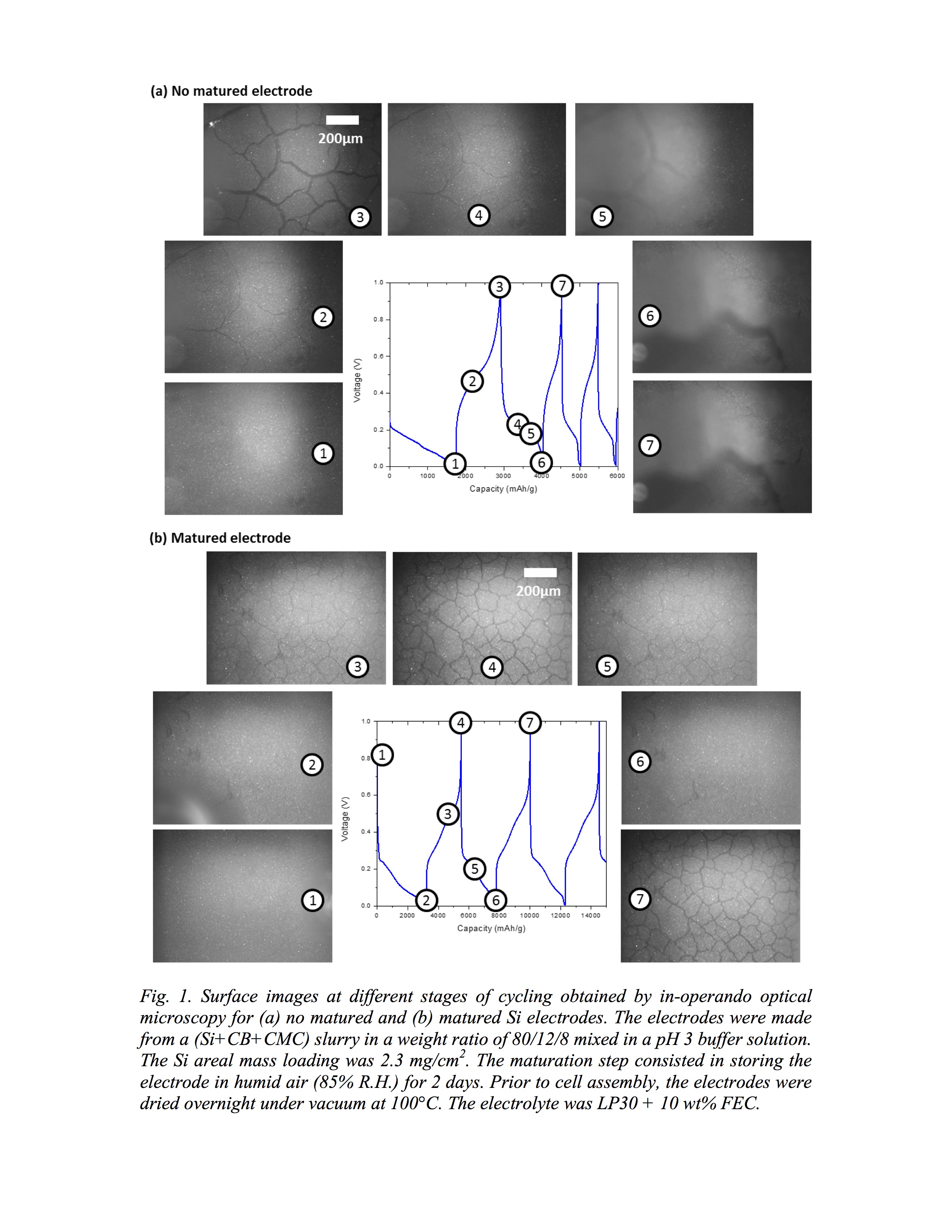