Grand Ballroom (Hilton New Orleans Riverside)
N. Azim (University of Central Florida, NanoScience Technology Center), F. Sommerhage, M. Aubin (NanoScience Technology Center), J. Hickman, and S. Rajaraman (University of Central Florida, NanoScience Technology Center)
Microelectrode Array (MEA) devices are well established platforms for biosensing applications, however, limitations in electrode materials and cell coupling to electrodes still exist. Signal-to-noise ratio (SNR), a fabrication limitation, can be improved by reducing the impedance of the microelectrodes without increasing their physical size using conductive nanomaterials. Platinum is a well-studied conductive material that has been determined to be compatible with MEA devices, contains high electronic conductivity, is non-toxic to cells and has excellent catalytic activity. Nano-porous platinum, as compared to pure platinum, has larger surface area enabled by nano-scale definition, and as a result can lower the impedance of microelectrodes. Therefore, in this study nano-porous platinum was electroplated onto thin film gold electrodes to increase SNR in a single-well MEA device. Numerous commercial and research grade MEAs are available and have been subject to for various applications such as disease modeling and pharmaceutical screening. Although high densities of cells can increase the probability of cell-electrode coupling, only signals near electrodes will be detected. Our approach introduces a method of precise patterning of cells on electrodes to increase the probability of cell-electrode coupling and reducing inaccuracies and expenses associated with cell plating.

The single-well MEA glass die was designed and fabricated to contain 64 microelectrodes (30 µm diameter with a pitch of 200 µm) and 4 internal on-chip reference electrodes. The MEA glass die fabrication was performed on a 4-inch, 500 µm thick glass wafer. First, metal traces composed of titanium and gold were deposited using lift-off lithography. Subsequently, 5 µm of SU-8 was spin coated and defined as an insulation layer. A separate printed circuit board (PCB) was designed and fabricated to contain 72 contact pads and routing traces. The biocompatible epoxy 353ND was used to package the glass die and PCB in specific orientations determined by alignment markers. Ball bonding with 20 µm diameter gold wire was used to wirebond the glass die to the PCB. A packaging technique was developed that would allow the characterization of key properties of the MEA. This technique involved using copper wire, 100 µm in diameter, and attaching it to the contact pads on the backside of PCBs using a conductive epoxy. Finally, a polystyrene culture well and lid were attached to the MEA using the epoxy, 353ND. Nano-Porous platinum electroplating solution was prepared with a combination of chloroplantinic acid, HCl and lead acetate, all diluted in DI water. Fully packaged devices containing approximately 3 mL of electrolyte were placed within the Axion BioSystems Muse for nano-porous platinum electrodeposition, utilizing the custom Application Specific Integrated Circuit (ASIC) in the system at room temperature.

The nano-porous platinum electroplated devices were subsequently characterized using electrical impedance spectroscopy and cyclic voltammetry against the control devices, which contained gold electrodes. The impedance of each device was measured across a scanned frequency range of 10 Hz-100 kHz between the microelectrode, the internal reference electrode and cellular conductive media. The impedance of the nano-porous platinum devices is an order of magnitude lower than the devices with gold electrodes. Cyclic voltammograms were obtained at a scan rate of 20 mV/s in the range from -0.28 to 1.2 V vs. Ag/AgCl. RMS noise comparison between nano-porous platinum electroplated devices and control devices (gold electrodes) was determined using the Muse system and Axion’s Integrated Studio (AxIS) software.

Biosensing applications for the devices were explored using electrogenic cells in combination with a precise plating technique. As depicted in Figure 1, cells were positioned in a pattern on and around electrodes to increase the probability of cell-electrode coupling. The electrical response was obtained and analyzed using the Muse system and AxIS software. SNR of action potentials recorded from cells growing on devices enhanced with nano-porous platinum electrodeposition and cells on control devices with gold electrodes were compared. Activity within neuronal networks / beat frequencies of cell patches on electrodes were monitored over the course of 2-3 weeks.

The methods explored in this study not only decreases impedance of microelectrodes to increase SNR but also increases cell-electrode coupling by warranting the placement of cells next or on the electrodes by precision patterning. Future studies will aim to optimize electrode sensitivity using novel electrode materials, the porosity of different materials, and characterization using emerging analytical methods. Eventually these devices will provide in vitro systems to monitor both acute and chronic effects of drugs and toxins as well as to perform functional studies under physiological or induced pathophysiological conditions that mimic in vivo damages. 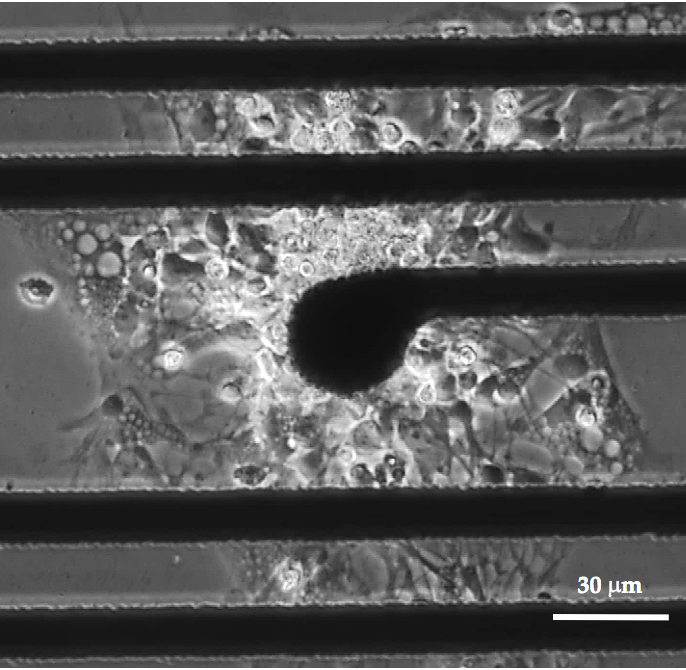