536
Li2s Nanoparticles for for a Better Understanding of the First Charge Working Mechanism of Li-Ion/Sulfur Batteries: An Operando XAS/Xes Coupled with XRD Analysis

Then the major focus of the presented work is to deepen the understanding of the Li2S material charge mechanism, and more precisely to characterize the effect of the initial Li2S particle size both on the mechanism and the electrode preparation process. To do so, Li2S nanoparticles were synthetized according to two ways: a liquid path synthesis [3] and a dissolution in ethanol, allowing Li2S nanoparticles/carbon composites to be made [4]. Preliminary chemical and electrochemical tests show that starting with Li2S nanoparticles could effectively suppress the high initial polarization (Figure 1b) but also influence the electrode slurry preparation. Indeed, it has been shown that classical formulation process - a slurry composed of Polyvinylidone Fluoride polymer dissolved in N-methyle-2-pyrrolidone - cannot be used with Li2S nanoparticles. This reveals a complete different Li2S material behavior regarding polymers and organic solvents when going at the nanometric scale. Then the coupling between two operando characterizations such as X-Ray Diffraction (XRD) and X-Ray Absorption and Emission Spectroscopy (XAS/XES) have been carried out in order to interpret the poorly understood first charge. The results allow to explain the electrochemical behaviors and particularly the polarization differences observed during the first charge between micrometric and nanometric Li2S-based electrodes. 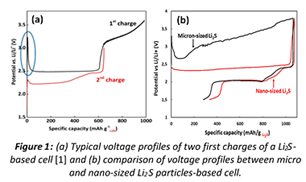