Grand Salon C - Section 15 (Hilton New Orleans Riverside)
J. Coyle (University of Colorado-Boulder, Sandia National Laboratories), C. A. Apblett (Sandia National Laboratories), and C. R. Stoldt (University of Colorado-Boulder)
Silicon is being considered for next generation energy storage anode material due to its very high specific capacity (3579 mAh/g), low overpotential, fast reaction kinetics and minimal environmental impact1. However, there are several problems to be addressed before silicon is realized in actual battery applications. These problems include a large change in volume during lithium insertion causing mechanical degradation as well as electrochemical degradation caused by a solid-electrolyte interphase (SEI) layer that is reported to not be electrochemically passivating2. The non-passivating SEI formed on silicon is potentially a major cause of a relatively stunted cycle life for silicon anode Li ion batteries because it consumes Li ions and solvents from the electrolyte3. There is not a good understanding of what complicated and diverse reactions are at work as the SEI layer is formed on the untreated surface of silicon during initial charging and discharging of the battery and how it develops during continued cycling.

To better understand the nature and evolution of the silicon SEI films, model systems of SEI structures were formed using sol-gel precursors deposited over clean sputtered 50nm thick silicon films. Chemistries from Li2Si2O5 to Li4SiO4 were synthesized from starting materials of lithium hydroxide and TEOS in a solution of methanol solvent with a controlled moisture environment. These films were then studied for Li transport and stability of silicon anode cycling against a Li reference and counterelectrode using standard 2032 coin cell configurations. Cycled anodes were then recovered and studied using NR, ICP-OES, Raman, ATR IR and TOF-SIMS.

The first observations of these model films was the dependence on stoichiometry for electrochemical behavior. While electrodes with only a native oxide layer behaved normally, with expected lithiation plateaus in the silicon, when electrodes with films of different lithium silicate compositions (Li2Si2O5 or Li2SiO3) were used, these plateaus were not present or shifted. Additionally, these films showed morphological and chemical changes on lithiation.

While the reason for these electrochemical behavioral changes has not been fully understood, these model systems start to tease apart the complexity of crystal structure and compositional changes that manifest in the silicon SEI, and may give some indication as to why the instability and low cycle capability of the silicon anodes is observed in practice. 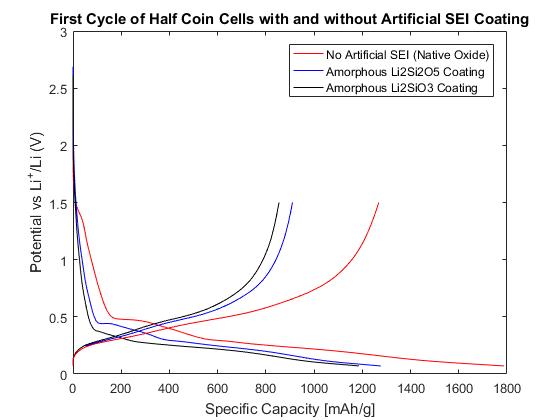