This was examined by assembling graphite/LNMO and graphite/LFP Swagelok T-cells equipped with a gold-wire reference electrode (GWRE) [5] and using 1 M LiPF6 in EC/EMC (3/7 by volume) as electrolyte. The cycling procedure was carried out at 40 °C. The GWRE allows the measurement of the half-cell impedances (anode vs. RE and cathode vs. RE) during cycling, so that the impedance evolution of each electrode can be monitored independently.

Furthermore, we will prove that the high-frequency semi-circle corresponds to a contact resistance by: (i) compressing the T-cell after 50 cycles, and (ii) coating the LNMO electrode on a glassy carbon support. In the first case (i), the high frequency semi-circle is no longer observable, and in case (ii), the increase of RContact is lower by a factor of ten compared to a LNMO electrode coated on an aluminum substrate.

As a next step, the potential dependence of the increasing RContact will be investigated. In Figure 1, graphite/LFP cells are charged to different upper-cut-off potentials (4.0 V, 4.5 V and 5.0 V cell voltage). It can clearly be seen that between 4.5 and 5.0 V the LFP impedance shows an additional semi-circle at high frequencies (RContact). This leads us to the conclusion that the increase of RContact is a potential dependent rather than a material dependent property and thus might also play a role in all high-voltage materials (e.g., in overlithiated NCM’s with upper-cut off potentials of »4.7 V vs. Li/Li+). Lastly, we will show XPS spectra of cycled current collectors and identify the origin of RContact.

This work is financially supported by the BASF SE Network on Electrochemistry and Battery Research. 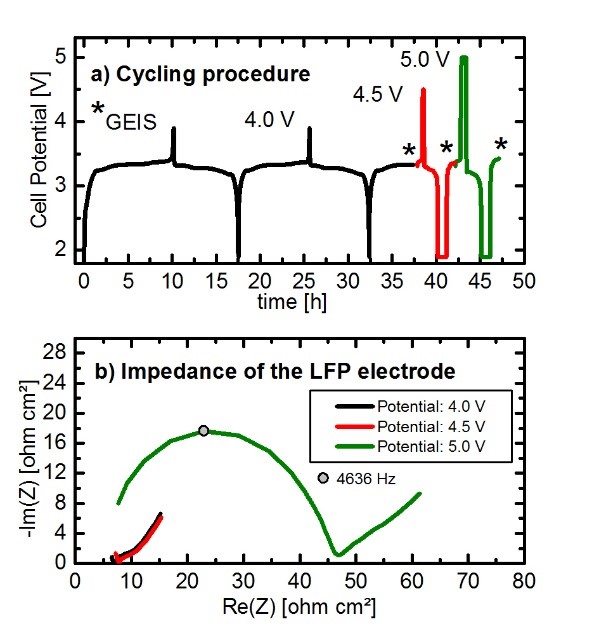