986
Effect of Magnetic Field on Al Electrodeposition in Ionic Liquid

Aluminum is a very important material because of its distinctive features of a bright silvery appearance, light weight and high corrosion resistance. Also, it is used as a base in light-emitting diodes owing to its high reflectance of more than 90% in the visible light region. We have previously carried out Al electrodeposition with additives and reported a shiny coating under the control of a stirred flow [1]. In that work, the surface roughness and glossiness was drastically improved by increasing the stirring rate.

To pursue a novel convection method, we consider that the superimposition of a magnetic field, B, is a possible solution. Lorentz force occurs when a magnetic field is applied perpendicular to current, and a convection caused by the power is called MHD convection [2]. Therefore in an ionic liquid which consists of only ion species, the MHD convection can expect to act more effectively as compared with an aqueous solution system. In this report, Al films were electrodeposited in EMIC-AlCl3 ionic liquid under a uniform magnetic field, whereupon their morphology and crystal orientation were analyzed by scanning electron microscopy and X-ray diffractometry.

Electrodeposition was carried out with a three-electrode system. The electrolyte used was EMIC-AlCl3 (1:2). The cathode was a Cu plate and the anode was an Al plate. All experiments were conducted in a glove box purged using by Ar gas at 60°C. The Al electrodeposition was conducted galvanostatically until the amount of electrical charge reached 29 C cm−2, which corresponds to a deposition 10 µm thick. A static and uniform magnetic field of 0.3 T was applied parallel to the electrode surface. The surface morphology of the electrodeposited Al films was observed using SEM, while the crystal orientation was measured by XRD using the Cu-Kα line.

In the galvanostatic electrolysis experiment, potential shifted to the noble direction by applying a magnetic field, and when current density was enlarged, the difference appeared more notably. The magnetic field also affected the orientation of deposition, and a (200) plane orientated priority. These are considered that the stirring effect by a MHD convection is involving. The SEM images show that the crystal grains change remarkably in the presence of a magnetic field, where a typical morphological variation is shown in Fig. 1. Fig. 1(a) shows angular deposits around 1.0 µm in size, and a surface covered with fine irregular grains. The application of magnetic field, however, created large grains with tabular-facet planes 2–4 µm in size (Fig. 1 (b)), although no additives were used in the present experiments. 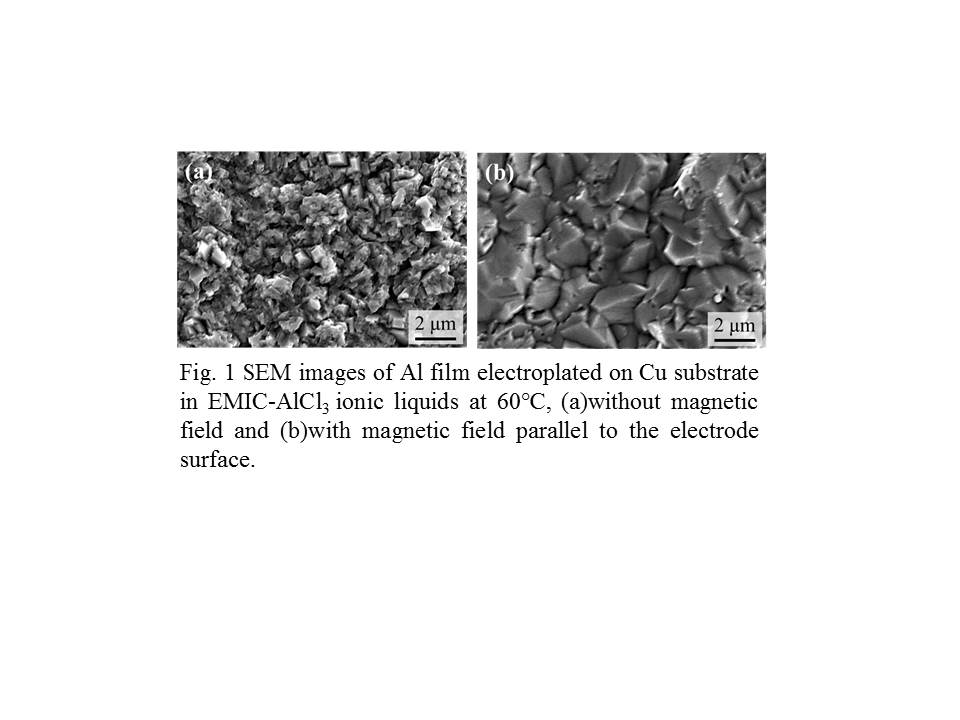