Maryland A (Gaylord National Resort and Convention Center)
A. Tkacheva, A. McDonagh, B. Sun (University of Technology, Sydney), and G. Wang (University of Technology Sydney)
The performance of lithium-oxygen (Li-O2) batteries can be improved using redox mediators (RMs) to promote the decomposition of the insoluble, electronically insulating discharge product Li2O2 during the charging process. Homogenous RMs are expected to have a better performance in Li-O2 batteries than heterogeneous catalysts due to a larger contact area.1 Several redox mediators have been tested, including TEMPO and its derivatives.2 However, the use of Li-O2 batteries in many applications such as electric vehicles is still restricted due to electrolyte decomposition, flammability and volatility. In order to overcome these issues, ionic liquids have been successfully used as solvents for Li-O2 batteries.3, 4 In this project, we present TEMPO-substituted imidazolium ionic liquids that can perform the dual roles of solvent and redox mediator for Li-O2batteries (Figure 1).

Ionic liquids were prepared using modified literature procedures.5-7 Cyclic voltammetry of the ionic liquids in dimethylacetamide with 0.1 M lithium bis(trifluoromethane)sulfonimide was performed using a CHI660D electrochemical workstation in combination with a conventional three-electrode cell. Figure 1 shows cyclic voltammograms for compounds with 4, 5, and 8 carbon atoms in the chains linking the TEMPO and imidazolium moieties. The ionic liquids undergo a reversible electrochemical oxidation reaction at ~0.5 V vs Ag/AgCl (~3.8 V vs Li/Li+) which means that they should be capable of oxidizing the discharge product Li2O2 upon charging to give molecular oxygen and lithium ions. The facilitation of decomposition of Li2O2 can substantially reduce the charge overpotential, thus improving the energy efficiency of Li-O2batteries. 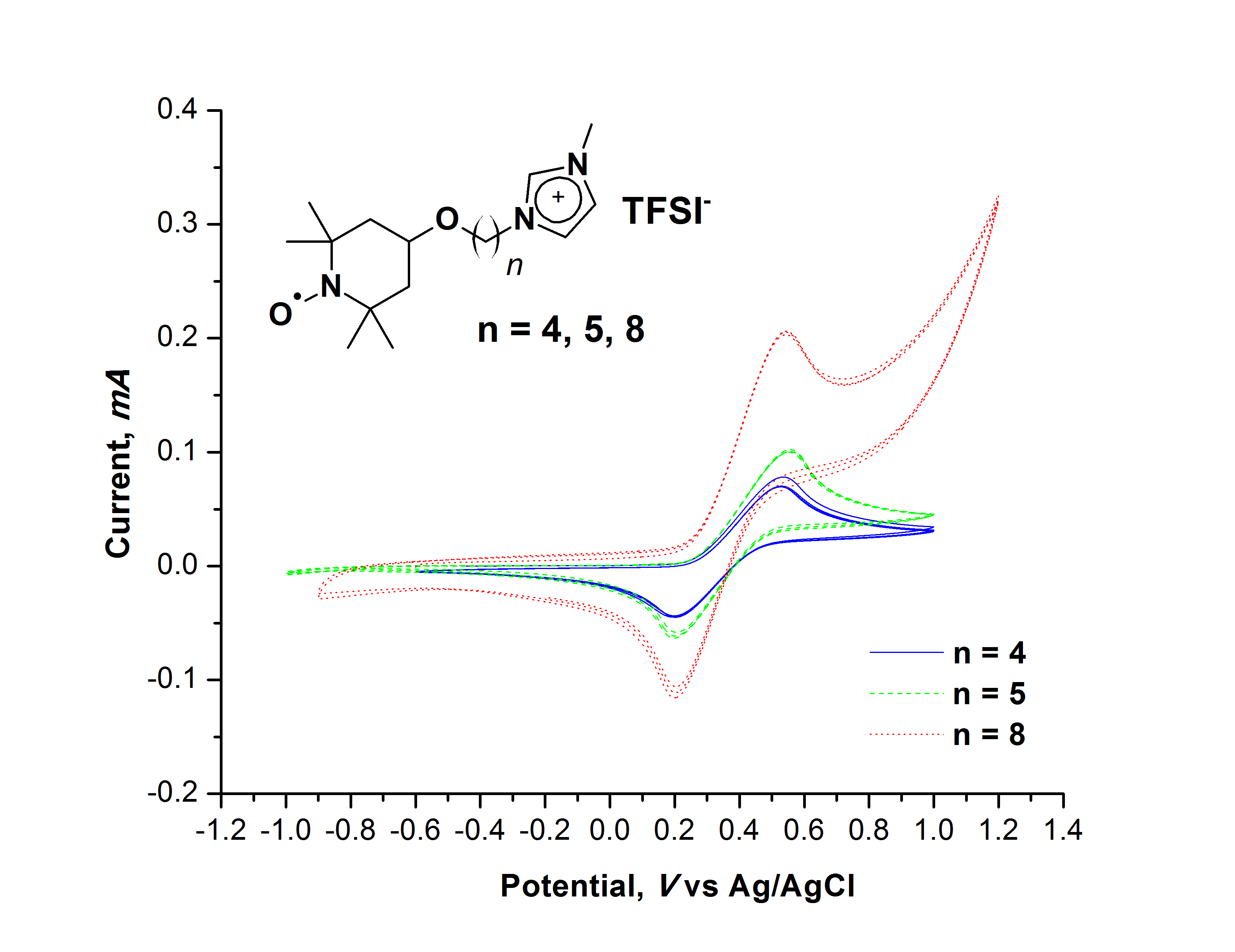