The specimens were AISI 1045 carbon steel (0.47%C, 0.19%S, 0.85%Mn, 0.015%P, 0.015%S, 0.02%Ni, 0.18%Cr, 0.01%Mo, 0.01%Cu, <0.001%Ti, <0.002%Nb, 0.024%Al, 0.005%N, 0.002%O). To obtain the primary ferrite-pearlite structure, all the specimens were heat-treated at 1523 K for 1.8 ks and furnace-cooled to room temperature. Figure 1a shows the SEM image of the specimen after the heat-treatment. A ferrite (primary ferrite) and pearlite structure was confirmed. In the pearlite, the bright areas were cementite (Fe3C) and the dark areas were ferrite lamellae. The distributions of the alloying elements were analyzed by a field emission electron probe micro analyzer (FE-EPMA). Figures 1b-d show the EPMA mappings of carbon, sulfur, and manganese. As seen from these figures, local accumulations of manganese and sulfur were observed in the pearlite as indicated by blue and yellow allows. The positions of manganese segregation were consistent with those of the cementite lamellae. Sulfur-concentrated points were observed in the ferrite lamellae.

The macro-scale anodic polarization curves were measured in boric-borate buffer solutions with and without NaCl (pH 8.0) under deaerated conditions at 298 K. Figure 2 shows the anodic polarization curves of the specimen with the ferrite-pearlite structure. In the solution with 1 mM NaCl, a large increase in current density was observed at approximately 0 V. It indicated that the chloride-induced breakdown of the passive film on the ferrite-pearlite steel occurred above this potential.

The comparison of the micro-scale anodic polarization behavior of the primary ferrite and pearlite were performed in the boric-borate buffer solution with 100 mM NaCl (pH 8.0) under naturally aerated conditions at 298 K. As indicated in Figure 3, the pits were initiated only in the pearlite and not in the primary ferrite. It was found that the primary ferrite phase exhibited higher pitting corrosion resistance than the pearlite. In this case, the pits were thought to be initiated in the ferrite lamellae because cementite has higher corrosion resistance than ferrites1. In addition to this, it was known that elemental sulfur causes localized corrosion on carbon steels.2 The segregation of sulfur seemed to cause the pit initiation on the ferrite lamellae in the pearlite.

From the in situ observation during the micro-scale polarization for the pearlite in the boric-borate buffer solution with 100 mM NaCl, the relationships between the direction of the ferrite lamellae and the growth behavior of the pits were analyzed using digital image processing. For the in situ real-time optical microscopy observation, a system similar to that developed by Chiba et al.3 was used. Figure 4 shows the CLSM (confocal laser scanning microscopy) reflectance image of the microstructure and the changes in the outlines of the pit mouth. As given in Figure 4, the pit growth and the lamellar directions were almost the same. The pits seemed to be initiated in the ferrite lamellae and proceeded along the lamellar structure of the pearlite with the selective dissolution of the ferrite lamellae. 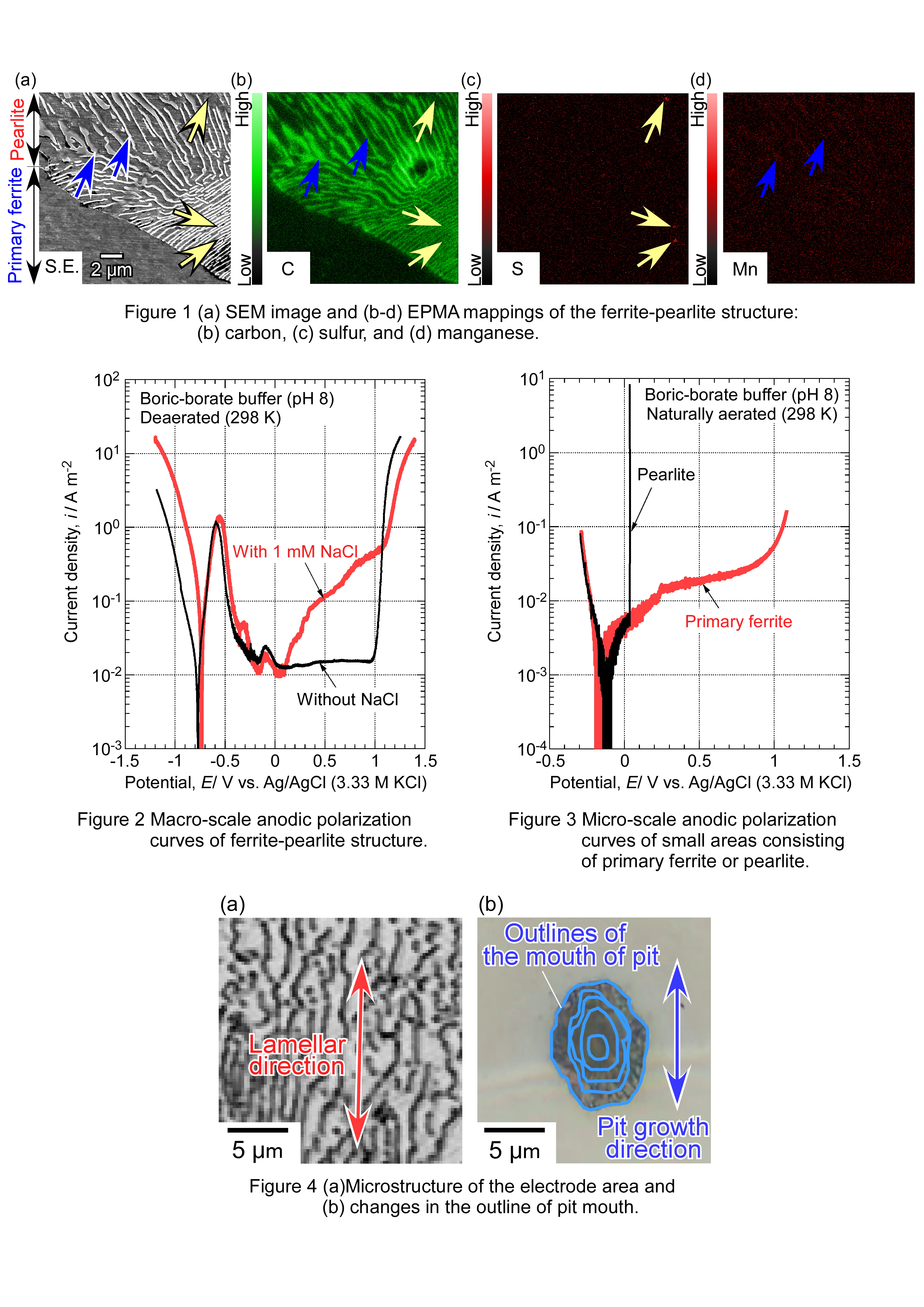