Maryland C (Gaylord National Resort and Convention Center)
M. Metzger, M. Egawa, S. Solchenbach (Technical University of Munich), and H. A. Gasteiger (Technical University of Munich, Chemistry department)
Recently, it was shown that H2O contamination in lithium-ion batteries can cause H2 gassing during the formation of the solid-electrolyte interphase (SEI) on graphite as well as substantial concentrations of CO2 in the battery cell.1 The latter was attributed to the hydrolysis of ethylene carbonate (EC) in the electrolyte by OH- formed through H2O reduction at the anode. The H2O- and OH--driven EC hydrolysis rates were measured at temperatures between 10 and 80°C by adding discrete amounts of H2O or TBAOH•30H2O to the electrolyte and monitoring the associated CO2 evolution by On-line Electrochemical Mass Spectrometry (OEMS).2

Apart from the intrusion of H2O into the battery cell as a trace contaminant, it was recently reported that H2O could be generated from the reaction of carbonate electrolyte with reactive oxygen released from NMC cathodes at high voltage.3 Thus, the often detected formation of POF3 at high-voltage4 could be explained by the reaction of PF5 with in-situ generated H2O to yield POF3 and HF. However, a competing reaction would be the reduction of the generated H2O at the anode (crosstalk5) releasing H2 and OH-, and forming CO2 via the hydrolysis of EC.

In this study, we will deconvolute these reactions. First, we present an accurate quantification of POF3 by determining its calibration factor in OEMS using a high-temperature cell and employing the thermal decomposition of LiPF6 to POF3 and PF5, as previously evidenced by TGA-FTIR.6 We further use accelerated tests to determine the thermal reactivity of both, H2O and OH-, with EC in a LiPF6 containing electrolyte, yielding CO2 and POF3. Next, we correlate our accelerated test with the POF3 and CO2 evolution formed by electrochemical side reactions during the SEI formation on graphite in presence and absence of H2O and OH-. For this, we employ our recently presented two-compartment cell in which anode and cathode compartments are separated by a Li+-ion conducting solid electrolyte (Ohara glass) laminated with aluminum and polypropylene foil, so that the gas evolution from side reactions at the graphite electrode can be studied without cross-diffusion of reaction products to the counter-electrode, thereby enabling a more detailed analysis of the reaction pathways.5 This is a major advance over conventional cells, where the gases come from both electrodes, and thus do not allow a deconvolution of the simultaneously occurring reactions from anode and cathode. The study is concluded by discussing the impact of the contaminants, H2O and OH-, on the cycle life of NMC//graphite full-cells at 45°C where both side reactions, the hydrolysis of EC and the decomposition of LiPF6, can play a role.

Figure 1 shows an exemplary OEMS measurement with a 1.5 M LiPF6 EC electrolyte containing either H2O (blue) or OH- contamination (green) in an accelerated test to determine the gas evolution from side reactions with these contaminants at various temperatures.

The authors gratefully acknowledge BASF SE for financial support of this research through the framework of its Scientific Network on Electrochemistry and Batteries.

Figure 1. Temperature set point (black) and cell temperature (red) vs. time during OEMS measurements (upper panel), and respective CO2 and POF3 evolution (lower panel) for 240 μl of 1.5 M LiPF6 in EC with H2O (blue) or OH- contamination (green). The gray data shows a reference measurement with only the base electrolyte (<20 ppm H2O). 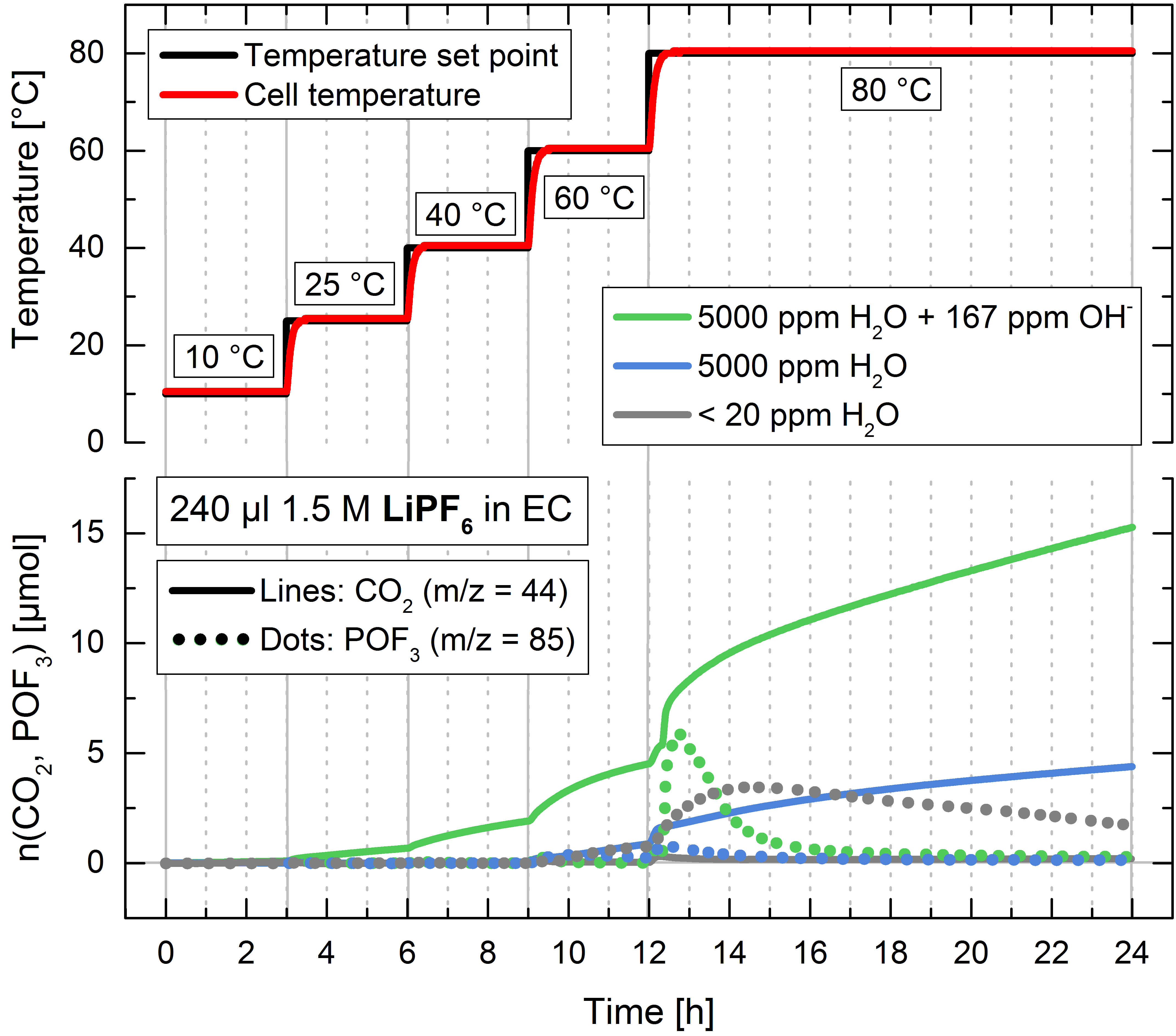